With all the noise about netbooks over the last 2 years and a Skribit suggestion on the same matter, I think I'm overdue for a post divulging my thoughts on netbooks. First off, what are these so-called netbooks? You've no doubt heard the term countless times. It refers to a small, generally affordable (I'm looking at you overpriced Sony Vaio P) and 'connected' lightweight mobile computer. Netbooks are made for browsing the web, anywhere. This pure mobility naturally comes at the expense of system speed and comfort; keyboards are generally 10-20% smaller than a regular laptop keyboard and the most common display resolution is a mediocre 1024x600.

I love the idea of the netbook. Yes, I have an iPhone and many people will argue with me that a netbook is a cheap computer made for the web and if it's the web I want, well an iPhone can do most of the same stuff and it's with you everywhere. That still a moot point; netbooks obviously offer more uses in that they can run full-fledged operating systems and have keyboards.

But I Already Have a Laptop

And if you're anything like me, it isn't as mobile as you'd like it to be. On top of that my MacBook Pro is always docked to my external display and keyboard. The cycle of disconnecting/reconnecting power, audio, 2 USB cables and ethernet (much faster MBP <-> NAS/HTPC transfers) and then readjusting windows on both displays has become such a burden I can hardly find the motivation to move to the couch much less take it out of my apartment.

Netbooks are portable enough that you don't have to think about whether you want to lug it with you to the coffee shop down the street. While performance vs mobility is generally taken into consideration when picking out a full-size laptop, netbooks aren't meant to be your primary computer. Netbook users know there are compromises that have to be made in the name of cost and size. That's that.

While not technically a netbook and more along the lines of a cheap tablet, TechCrunch has engineered what they call the CrunchPad. With a 12-inch touch screen and rumored price tag of ~300, I feel that it will share much of the same audience as netbooks. 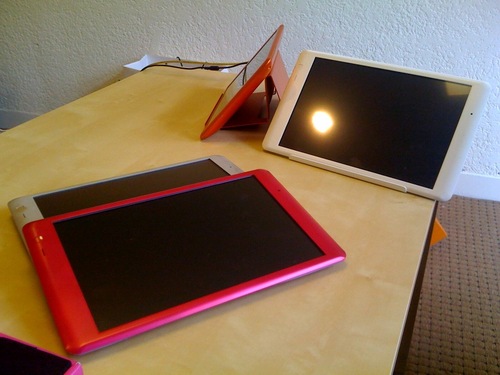 As Michael Arrington pointed out, the touch screen CrunchPad is ideal for Internet consumption, not data entry (try typing with an on-screen keyboard for more than 10 minutes). We won't know what it's like until they start selling, but I have a feeling the form factor will inherently lend the CrunchPad to not being quite as useful as a regular netbook. Holding the CrunchPad all the time or using a stand seems like it would get annoying. Then again, I've never been a tablet fan so I'm coming in with a little bias.

The Problem I See: Software

So far we have learned that netbooks are affordable computers with enhanced-mobility ideal for secondary computer use. But we haven't talked about software yet. Over 90% of netbooks shipped to date come with some form of Windows XP. Others use slightly modified Linux distributions like Ubuntu. While netbooks are built for Internet use hardware-wise, they are still using the same desktop OSes. That just doesn't pan out too well when you have small displays and OSes that were built assuming you'd have no problem clicking on a tiny taskbar icon. And with newer netbooks boasting impressive resolutions like 1280x800 on 8.9-inch displays (or the 1600x768 resolution on the Sony Vaio P's 8-inch screen), this issue will only get worse.

But change is coming. Microsoft is working on Windows 7 Starter edition, geared for netbooks with such limitations as only being able to run 3 applications at a time. That's interesting but what I'm really looking forward to is platforms built early-on with mobile in mind. For example, Google's Android platform wasn't made with only mobile phones in mind; it plans to work with any device.

And then there's Jolicloud. Under the direction of Netvibes founder Tariq Krim, Jolicloud might look something like the screenshot below. A trusty Linux backend with a netbook-friendly interface taking note of iPhone-like design methods. 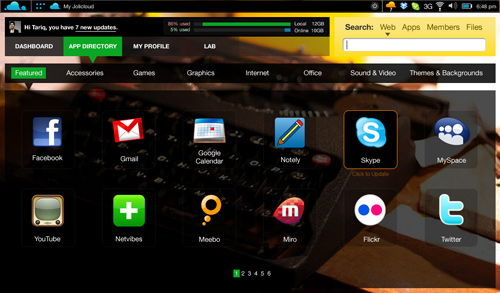 Netbook OS initiatives like Jolicloud will be crucial to the proliferation and seamless adoption of netbooks in the near future. Netbooks are kind of like the awkward PDA back in the mid-90s. They can do some stuff but without new software applications and OSes designed with their constraints in mind, they won't reach their full potential. Going back to the PDA analogy, I would really, really like to see netbooks start coming with WWAN connections like current 3G offerings as well as new technologies like WiMAX.

I did a little experiment, similar to what I did with my location sharing post, and asked my ~10,000 twitter followers what they thought about netbooks. I figured including their thoughts would provide a clear view of the netbook landscape. Here's what they said:

Chanathan: @Stammy ideal for students, good as a 2nd computer, not powerful enough feature wise to be a primary machine, can see the appeal for certain lifestyles

lashakrikheli: @Stammy Quote from my blog: It cannot be your primary work machine, and it probably should not...

Penguin: @Stammy Paired with OS X, Web sync & a Cloud Life; Dell's Mini 9 is the perfect travel weapon. The price of a MacBook Pro buys 10 of them.

dbarner: @Stammy buy on value, period. To some a MacBook pro is a must, to others a netbook provides total value. Diminishing marginal utility is key

jakebellacera: @Stammy I like them, they come in handy when I need to quickly meet up with clients and I have a mini projector nearby.

mustangman311: @Stammy new round of of them seem a lot more promising than the original Eee and such. Actually usable machines now, maybe.

amdev: @Stammy generally I like netbooks but i can't get over the realistic inevitability that once i buy one, i won't use it. MBP all the way..

Twaites: @Stammy — I personally think they're useless... Under powered, basically no storage. And for email or surfing I always have my iphone.

Twaites: @Stammy ... and my macbook is just as portable as any netbook in my opinion. So they're is no need for a netbook in my life.

skalnik: @Stammy Netbooks rock for small day to day tasks, but seems like a bit of a waste of money, I'd rather just have 1 laptop for everything.

kearneykd: @Stammy Until the prices come down I don't see how they can compete with the smart phone and laptop combo.

WiLLGT09: @Stammy are you thinking about getting one? have one already? I'd get one, but currently don't have a need for one. macbook is plenty small.

patrickryan: @Stammy I wrote a blog post about my experience w/ the hp mini 1030nr

elliothere: @Stammy At least for me, impractical. If I need to work, MacBook. Need to quickly check email/the interwebs, iPhone. Why add another device?

titanium_geek: @Stammy I'm a one computer girl (macbook 13in) for budget reasons- netbook=light, but wouldn't want to rely on one as only computer.

cconover: @Stammy I think they're a great idea, especially for students in class. However, I'm inclined to wait for a Crunchpad vs. a netbook :)

gjhickman: @Stammy I've been reading reviews about putting os x on the lenova s10 and dell 9. my buddy is doing the 9 right now. I like the lenova...

squawkbox: @Stammy I use NC10, brilliant device for teaching, much less bulky than l.top which I don't really use now.

adnymarc: @Stammy netbooks are improving and gaining popularity but still require a significant tradeoff in usability and performance for portability

tommcfarlin: @Stammy great device for web browsing, not so good for writing or development. high on portability, low on keyboard and resolution quality.

I don't have a netbook (although having one strictly for couch/bed use is enticing) and won't be in the market for one until more operating systems are available that really make use of the unique constraints and affordances netbooks bring to the proverbial table. I expect that will be in 8-12 months.

For further netbook reading, Wired has some interesting articles about the success of netbooks and the current landscape of netbook OSes.

Netbook - yay or nay? If you've got one, which one and how do you like it? What do you use it for?