While I'm not quite sure that's the most fitting title, I've recently been thinking about online anonymity in regards to web applications. In this time of social networks, social media, OpenSocial and what not, I find it a bit annoying that so many people go about using these social tools as anonymous users or registered users with profiles otherwise devoid of even the slightest lick of personal information.

The all too familiar icon adorned on yet-to-be-customized Facebook profiles or those whose owners would rather not upload their mug.

Before I go off on my little rant, I will state that I am aware that some people are not comfortable with putting even so much as their full name online. That's fine. It's called privacy and everyone can hold their own opinion about it. I'm talking more about the users that don't add any value, from a community management perspective. People that use and don't contribute in a way helpful to the community. They might impart their wisdom here and there but it doesn't help much if the community has no idea who they are. This isn't a new concept. It stems from lurking but whereas lurking can deal anyone for any public service like this blog and the issue of reading/commenting, I am focusing specifically on users of a particular system.

People that don't hold an identity online or on a certain social web app are inherently less personable to other users. For example, I am researching Twitter for my design of online communities computer science class. As part of this research project, I have carried out several lengthy in-person interviews with Twitter users. When I asked them about the types of people they follow and the identities those people portrayed online, they commented on how they rarely or never followed users with no bio information and/or no real name. It's a lot easier for users on socially-geared websites to interact and establish a sense of rapport with other users if they know a bit about those people. 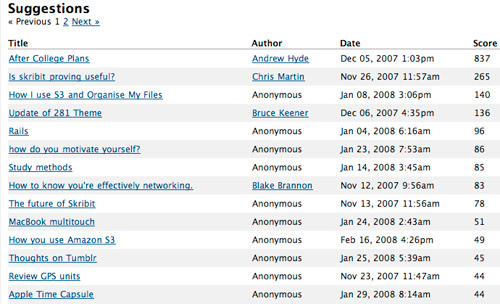 From my Skribit account. Look at all those anonymous suggestions. I wish I knew more about the submitter to get a better idea of where they're coming from.

How did I ever start thinking about all of this? Ever since working on Skribit, there has been the issue of dealing with anonymous users. Internally, we've debated numerous times over whether to even allow anonymous users. Of course there are always two sides to a story.

Pros: No barriers to entry. If someone wants to get involved quickly, they don't have to create an account. It's just easier to be anonymous. Cons: Other users don't know who just interacted and give that interaction less credit. For example, if anonymous gives me a blog post suggestion via Skribit I might think of it as just another suggestion and I'll get around to it eventually if it holds merit and if other users like it. Then again, if John Smith, a frequent commenter, gave me the same suggestion I would be more inclined to write that post as I have the sense that Mr. Smith is a dedicated reader and thus I tend to give his suggestion more credit.

Also, at least for Skribit, anonymous users have no way of tracking their suggestion. They can't login and see if I've written about the suggestion, commented or deleted it without explicitly visiting the suggestion page.

Solution: Increase registration rates with simplified account creation and make the value-prop of the app crystal clear. Of course, that's easier said than done. It just boils down to the user's predispositions to sharing information online, however little it may be.

Thoughts? Do you err on the side of a strong online identity or try to stay as invisible as possible online?