Summize, a company I am quite familiar with following my review of their review aggregator product, has substantially changed their company direction since I have last been in touch with them. They are now focusing on a Twitter search tool - so much so that it is their main product and the review aggregator has been moved to their Labs section. So why the abrupt change? Summize CEO Jay Virdy tells me they see an opportunity to do something big in the Twitter space and I believe them. 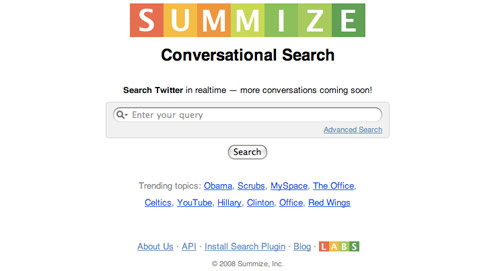 I'll skip the details as we all know Twitter is big right now and making waves. I mean I wrote a research paper on it for a computer science class. That usually wouldn't fly if Twitter was anything short of game-changing. As I noted in that paper, Twitter is used for many different things rather than people listing what they're doing. This is where Summize comes in handy. It helps you filter through everything to find what you really want.

The first inception of any real sort of Twitter search was the Google Co-op powered Twitter search created by Steve Rubel. The only downside is that it treats Twitter like just another site. It doesn't delve deeper into the content on Twitter and utilize metadata such as usernames and at replies.

Summize was built around comprehending the Twitter syntax and characteristics, even hacks such as hashtags. So why do I personally use Summize? Brand Management. It's the best tool in a community manager's arsenal, or for that matter anyone wishing to keep track of something.

Take Wednesday night for example. I was with the people behind Pownce as they launched support for public files. After it was announced I showed Mike Summize as a way to quickly track what people were saying about Pownce. It proved rather useful. The only piece of feedback Mike had for Summize was that it should automatically update the search results rather than saying more results are available and forcing users to reload the page to view them.

As one would expect with any modern, user-friendly search tool, Summize allows users to subscribe to custom search query feeds. I do this to help track buzz around Skribit by subscribing to a feed not including things I or other Skribit co-founders have posted or received on Twitter, since we would have already seen them in our replies tab on Twitter.

I subscribe to that in Safari, which passively notifies me of new results with the number of results next to the bookmark. It fits seamlessly into my daily workflow. When I spot someone having trouble with Skribit, I'll drop them a message on Twitter to see if I can help. Contrast this with tracking the blogosphere and it is easy to see why I like Summize.

Twitter-able Summize Verdict: Summize is a powerful tool letting users maintain a grasp on the rapidly-updating Twitter community while retaining remarkable ease of use.