Over the last few months I have spotted more and more people toting diminutive USB flash drives, similar to 2005's oddly failed SD Plus form factor memory cards. The flash drives I am talking about are literally one chip with no additional USB adapter. They fit inside the actual USB port. Around two months ago I found Kingmax selling such a contraption. At a whopping 12 I could not resist (edit: price seems to have increased to 25) picking up a few of these 8GB wonders. 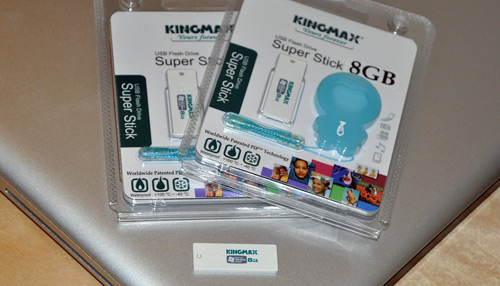 Of course, this flash drive is extremely easy to lose. It comes with a gimmicky case and mini-strap but I don't think many people will actually use that.

So what actually makes this flash drive so small? Kingmax has managed to integrate DRAM into the TinyBGA form factor (although the rest of the industry calls it MicroBGA). They call this technology PIP and it has nothing to do with the PIP your HDTV has. Instead, it stands for "Product In Package" and refers to the fact that the flash drive is essentially the same thing as the packaging/case. What you see is what you get, literally.

To put this into perspective, I coaxed the actual chip out of the small plastic case.

The benefits of this type of packing include natural resistance to temperatures nearing 100 degrees Celsius and -40 degrees Celsius, as well as being waterproof. I wanted to put the Super Stick to an extreme test and see how long it could last and retain data as well as maintain acceptable performance once dipped in liquid nitrogen, but I no longer have any LN2 (as I did in this post).

Over the next few days I plan on putting the Super Stick to the test by letting it go through a wash and dry cycle, as well as boiling it. Depending on how well it performs, the Kingmax Super Stick could end up being the preferred USB drive for felons looking to ingest 8GB of sensitive data before the authorities arrive.

Transferring a single 550MB MKV video from my SSD-equipped Macbook Pro to the flash drive took 1 minute and 22 seconds. Transferring 550MB of 116 3-6MB DSLR photographs from the MacBook Pro to the Kingmax Super Stick took a bit longer at 1 minute and 39 seconds. Flipping things around, it only took 17 seconds to transfer the 550MB MKV file from the Super Stick to the MacBook Pro and 26 seconds for the photos.

Based on these iphone-timed-and-not-exactly-accurate limited test cases, that equates to a 5.5-6.7 MB/sec write speed and a 21.1-29.4 MB/sec read speed. To get a better idea of the performance of the Super Stick, I ran an Xbench hard drive test on it:

The benchmark proves that the Super Stick, as with all flash-based storage systems, isn't terribly good at random activity. The good news is that unless you're running an OS off this thing, you won't experience any slowdown. With sequential writes hovering around the 9-12MB/sec range and reads tapping close to 35MB/sec with larger files, the Kingmax is pretty speedy. However, I have no clue as to whether the Super Stick uses MLC or faster SLC flash memory.

Numbers mean nothing without a frame of reference. To the best of my googling, the fastest USB flash sticks currently on the market offer read speeds of around 40MB/sec and write speeds around 30MB/sec. That means that the Kingmax Super Stick is pretty damn fast.

And on that note, it should be no surprise that the Super Stick is advertised as being Windows Vista ReadyBoost compatible. ReadyBoost is Windows' attempt (and most would say success) at pre-caching application data for frequently-used programs. The benefits of ReadyBoost don't become apparent until several repetitive tasks and "cycles" of using similar applications, even through reboots. When fully primed, people have reported application loading times for applications like MS Outlook dropping from 11 seconds to 2-4 seconds. However, don't expect ReadyBoost give you those type of speed improvements if your machine already has a great deal of system RAM.

I was able to get it up and running as a ReadyBoost device in my Windows 7 Beta 1 VMware installation, but I'll refrain from offering performance numbers as they wouldn't be accurate in real world situations. 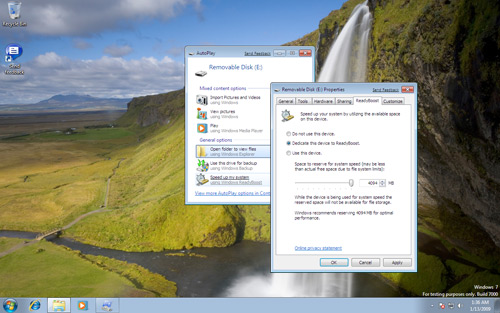 I haven't used a USB stick in quite some time, especially with my whole online storage and "cloud" fascination, but I will gladly add the ridiculously cheap and well-performing Kingmax 8GB Super Stick to my hacker arsenal. Maybe I'll keep it in my wallet and fill it with dummy files of launch codes, confidential FBI files and other ominous data in the event I'm ever mugged.. will keep them guessing.

What have you been using for your USB flash drive needs as of late? Do you think this Super Stick would make for a nice upgrade or would you rather not use anything too small to fit on your keychain?