Last week Apple introduced four iPod Shuffles in vibrant colors including orange, making it the first iPod to be offered in orange. There were no changes made to the Shuffle other than the color and that the Shuffles were bundled with the newer ear buds. Let the unboxing begin.

Aesthetically the Shuffle is flawless and "unbelievably small" as Steve Jobs says, weighing in at a mere 0.55 ounces. It comes in only one flavor of storage - 1GB, yet offers improved utility from the first generation Shuffle via the integrated clip. I purchased the Shuffle primarily for the gym and walking between classes on campus - times when I want a no-nonsense, turn on and play experience. I don't want to be bothered by going through menus and playlists. Going along with that logic, when you plug the Shuffle into iTunes with the USB dock, it will ask you if you want to autofill the Shuffle with random songs from your iTunes collection. If you're not up for that adventure you can always drag and drop songs manually to the Shuffle.

The Shuffle sports two switches on the top spine of the unit; one for power and one for playback method (shuffle or regular), alongside a status LED. The Shuffle's facade has the basic forward, backward and volume controls centered around the play/pause button. 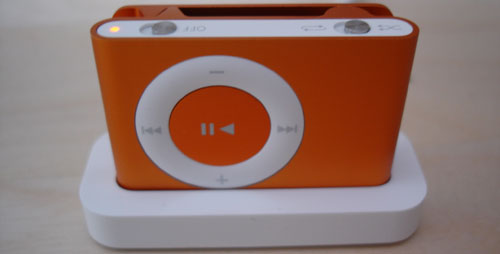 The orange Shuffle is exceedingly vibrant and attention-grabbing.

Battery life hovers around a respectable 12 hours. On the other hand, sound quality is something I'm still up in the air about. During low-volume parts of a song, there is a noticeable hiss and static sound although not prominent enough to annoy even a moderate audiophile. Listening between my first generation iPod Nano and the Shuffle, I was able to discern that the Nano's quality was better. Josh Pigford from The Apple Blog went as far as to tell me he thought that the second generation Shuffle has 50% of the sound quality of the larger iPods. I'm not an audiophile by far so you'll have to determine that for yourself.

I got it engraved for free from Apple's online store.

Despite the short cable, the new ear buds fit much better.
The cable of the newer ear buds included with the colored, second generation Shuffles is unfortunately several inches shorter; I'd say around 8 inches shorter. I find this rather annoying when I'm jogging and have the Shuffle clipped to the bottom on my shirt; it's only just long enough.

Overall, I am happy with the purchase and enjoy clipping it on to my shirt and strolling to class. Unlike the other iPods, the Shuffle doesn't require looking down at it to use. You will definitely not enjoy the Shuffle if you expect to be able to find a particular song to play. The whole point of the Shuffle is to utilize the shuffle playback mode and not care what song is playing. If you have a problem with that and often find yourself skipping songs, you probably have a sub-par music collection.