It wasn't too long ago that I was taking a look at the first Eye-Fi card: a 2GB Wi-Fi-enabled SD card that uploads pictures to configured computers and photo-sharing websites. I concluded that the Eye-Fi was a 9 out of 10. Since then, Eye-Fi has differentiated their products and now there are three distinct offerings: the Eye-Fi Home, Share and Explore. I'll be taking a look at the high-end Explore model (129) which does everything the old Eye-Fi does as well as geotagging. 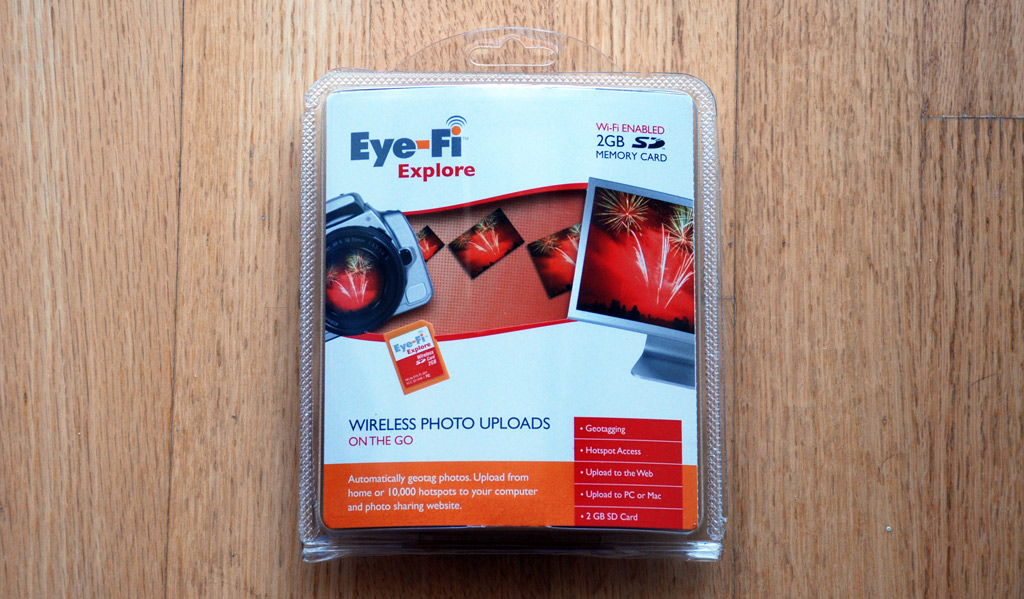 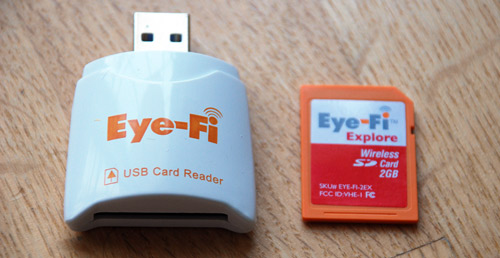 Just like the first Eye-Fi card, users will need to run a setup first that guides them through adding Wi-Fi access points to connect to as well as determining where to upload photos to - the computer and/or a slew of photo-sharing sites. The Eye-Fi Explore brings about two new options: geotagging as well as support for Wayport hotspots (free for a year). 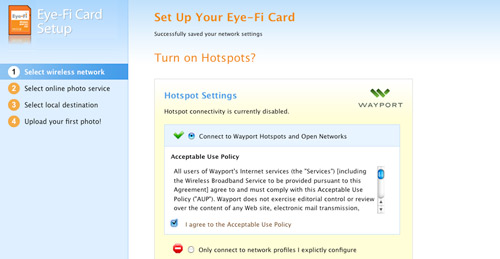 Here's a quick video I made showing the whole Eye-Fi Explore experience. I have my Eye-Fi Explore configured to upload photos to my Flickr account, with photos set as private. Harnessing the power of my Internet connection, photos are uploaded to Flickr within seconds and it has really become a huge convenience.

How does the Explore's geotagging work? For one, it does not use any sort of GPS technology. Instead it utilizes the Wi-Fi Positioning System by Skyhook Wireless, the same technology used by Apple in the first generation iPhone to provide locational data. Skyhook has a massive database of US and Canadian access points and correlated that to GPS locations. Even without connecting to the access point, the mere presence of that access point and others helps provide locational information. Now for the million dollar question. Is it as accurate as the 20 meters number provided by Skyhook?

I decided to take a little drive with my Nikon D80 to put the Eye-Fi Explore to the test. After I got back home, the images were uploaded directly to Flickr with the Eye-Fi and I used Flickr's map view to see where it had plotted the images. The Eye-Fi Explore embeds location information within the image's EXIF data, which Flickr utilizes, as well as origin information, such as "Atlanta, Georgia, United States", that are used as regular tags by Flickr.

Above is an example of how Photoshop displays that EXIF data, which the Explore declares as GPS info since there is no EXIF attribute for WPS metadata in the EXIF 2.2 specification (PDF). Below are three examples of the accuracy I was seeing with the Explore. 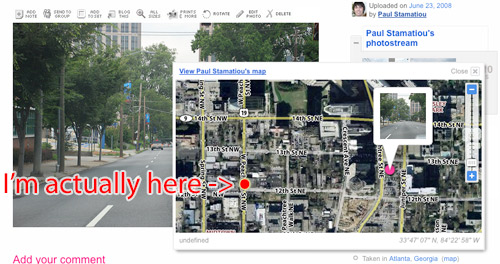 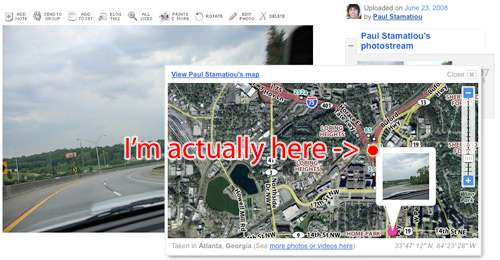 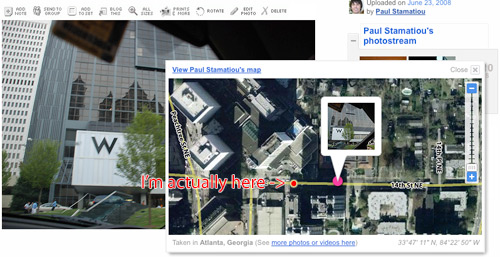 As you can see, the results are kind of all over the place. I have a few reasons why that might be the case: 1) I drive fast, not giving the Eye-Fi Explore enough time to scan for access points, 2) the camera was inside my car, limiting Wi-Fi reception by some factor. I have noticed that if the Explore cannot find any or enough access points to determine a position, it tends to use the last known position. That explains the first image as I had originated my journey from the location it reported. That also explains the second image on the highway, where there are naturally not many access points within range. As for the third image, that's just about spot-on and less than a block away. I also happened to be stuck in traffic for that image.

The WPS location data from the images I took from my apartment (like in the video) were extremely accurate, down to the building. There are many access points within reach of the Explore from my apartment.

While the three examples I gave had varying degrees of accuracy from 5 blocks to less than one, I truly believe the Eye-Fi Explore is a fantastic piece of equipment and will work better in more populated city areas where Wi-Fi access point density is high. Imagine taking a trip, coming back and uploading your photos to Flickr and seeing a map of all of your photos. That's possible today and you don't need a separate time-stamping GPS datalogger and sophisticated software to piece it all together. The Eye-Fi Explore receives 9.5 out of 10 Stammys. It will receive 10 when they somehow fit a GPS receiver inside of there.

You can take a look at the 129, 2GB Eye-Fi Explore at Superamit's Photojojo.com. Is the Explore for you?