Today was the day that just about everyone that ordered a mini on the 28th received it via FedEx. Tons of picturesof the Intel Mac Mini's internals flooded the internet this morning. Shots of the double-layered DDR2 200pin SO-DIMMs slots, the IR port next to the optical drive responsible for the Front Row remote control feature, the new Serial-ATA hard drive interface and more surfaced. However, one thing that caught my attention was the use of a socket for the CPU rather than a soldered-on, unreplaceable processor. The big connotation with this is that you can buy a cheaper Mac Mini such as the 1.5GHz Core Solo (assuming the motherboard and software is identical between Core Solo and Core Duo versions) and upgrade it to something like, say a 2.0GHz Core Duo. I still have to sift through some whitepapers and find exact heat specifications for the 1.83, 2.0 and 2.16GHz Core Duos to see if the Mac Mini's heat sink and fan combination would be up to the task. 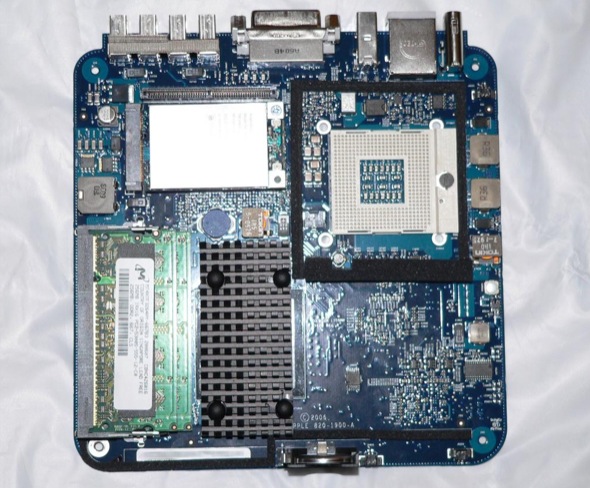 Similar to the overclocking craze with the old Mac Mini, of which I became victim, I think that we will start to see a hardcore modding scene revolve around putting aftermarket processors in their cheap minis and adapting various cooling solutions to fit them. I already have plans to create a copper cooler, with the help of a friend with access to a CNC, for a new mini which I hope to purchase soon.

The older PPC-powered Mac Mini was known to be a based around weak chip. The Core Duo platform, utilizing Socket 479 (different pin-outs than your garden-variety P4), is a proven benchmarking and overclocking machine. For example, in PC's, a Core Duo 2.0GHz can easily reach 2.5-2.6GHz on air. Apple's decision to incorporate a socket, as they did in the Intel iMac as well, was a great move. Not only can they presumably use the same motherboard and slap on different CPUs as demand requires, but they now have caught the attention of the fast-paced modding community. Maybe we will start to see some modding switchers. I will tell you one thing though. If someone ever vapor phase change cools the new Mac Mini, it might be me as my roommate builds those things for fun.