The Institute of Electrical and Electronic Engineers, of which I am a member, is completing the specifications for a new ethernet standard, one capable of 10Gbit/second signal speeds utilizing Category 7 cabling and a new type of jack. 10GBaseT is one step ahead of the current Gigabit ethernet that uses the same 8-conductor jack and Category 6 cabling. The most interesting part of this news is that 10GBaseT, to be approved by the IEEE in July, will not use the typical RJ45 connector we've all come to love. Instead it will use a radical new connector, the GG45 made by Nexxans, which has 8 conductors at the top and 4 conductors at the bottom of the jack. 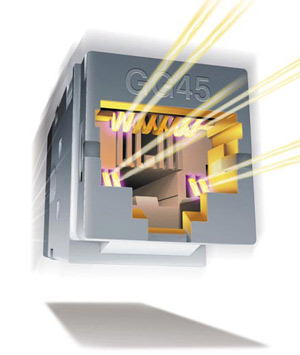 The new Nexxans GG45 jack has 4 new pins on the bottom.

However, only 4 of those 8 conductors on the top will be used during 10GBaseT actions, the other 4 are utilized for backwards compatibility with Cat6 cabling. You might be seeing this on your next motherboard. My only concern is that it doesn't look like the jack will have those two ethernet activity LEDs, as there are now pins in place of them. DailyTech has the rest of the story.