Last year around superbowl time, I posted an article showing how my roommate and I had built a stadium seating setup for our living room. This year, we went one step further and added a 2500 lumen projector to the mix to create the ultimate home theater system on a budget. 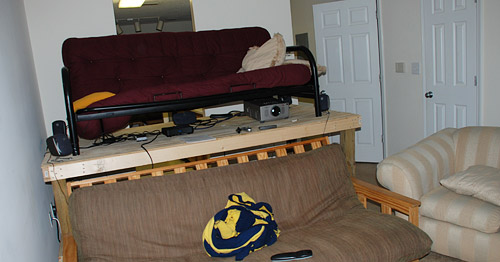 You'll need a projector and screen.

Finding a worthy projector is the hardest part of setting up your own home theater. Since new projectors, especially ones powerful enough to be used in a home theater setting, are prohibitively expensive I began browsing for used projectors. When searching for used projectors you need to ask about the condition of the bulb. Most projector bulbs last around 2,000 hours and replacements cost several hundred dollars so it's imperative that you get one with a few hundred hours left, at least. If the owner doesn't know, tell them to go through the projector's menu - there is often a way to display the number of hours used on the bulb.

You also need to check that the projector doesn't draw too much power. Chris and I were almost set on purchasing a massive CRT projector until we realized it needed a 220 VAC line and a whopping 30 amps.

After a while of browsing Craigslist and emailing several people, I found a suitable projector: a Sanyo Pro Xtra X PLC-XP21N. The bulb was in good condition (about 300 hours used out of 2,000) as was the rest of the unit. When the projector launched in 2001, it carried an MSRP of 12k so it was definitely a steal. It features a native resolution of 1024x768 and support for 1280x1024 compressed, with 3 LCDs for RGB. It's not DLP but features a decent 700:1 contrast ratio and for 350 divided 3 ways (split between roommates), I can't complain.

As for inputs, it has component, s-video, composite, and a few DE-15 VGA monitor inputs.

Most content will be delivered through component cables from the Vudu box, VGA directly from a dedicated home theater PC or composite from our non-HD Comcast cable box. 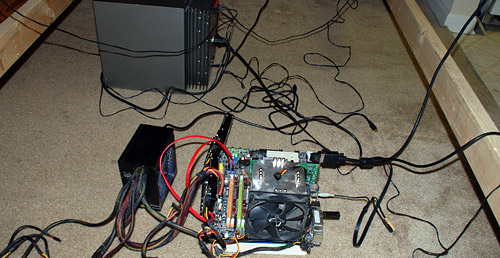 Chris's desktop serving as a makeshift HTPC under the stadium seating platform.

The same person from Craigslist was also selling a 100-inch Da-Lite Da-Snap projector screen for 100 so we purchased that as well. That was also a steal considering the screen sells for over 1,000 new. 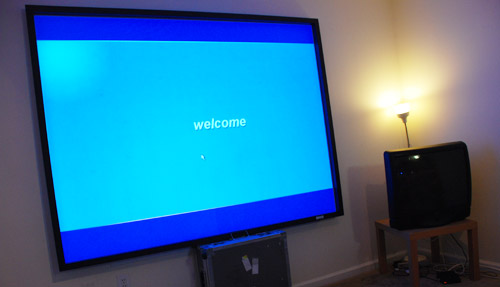 Overall, I think it is a sound investment and will put our couches to good use. The only issue is the person sitting in front of the projector needs to lay low while the person above the projector must not dangle their legs in front of it. A small sacrifice for an awesome theater setup if you ask me. The next step includes Chris building a dedicated HTPC and me finishing up my 750GB + 74GB file server.

Sorry for the picture quality, I took this from my iPhone whilst sitting on a couch to the side.

Verdict: Badass on a budget.

Thoughts? Which football team are you rooting for today?