Update: Thank you everyone for entering this contest, I was completely blown away by the number of submissions (over 770 comments!). That's more comments than any other PSTAM.com post has ever received, by a margin of over 300! I used random.org's random integer generator to produce a value of the ID of the winning comment, with duplicate comment IDs and my own comment IDs removed from the calculation. The random winner was "Hitman". Once again, thanks for participating and I hope you all stick around PaulStamatiou.com.

Xavier of Notebooks.com has been gracious enough to extend his hard drive giveaway to PSTAM readers as well as 9 other websites, courtesy of Seagate. Up for grabs are a 1TB FreeAgent Desk hard drive and a 500GB FreeAgent Go hard drive. If you have a Mac, let me know and we'll send you the Mac versions of those drives. 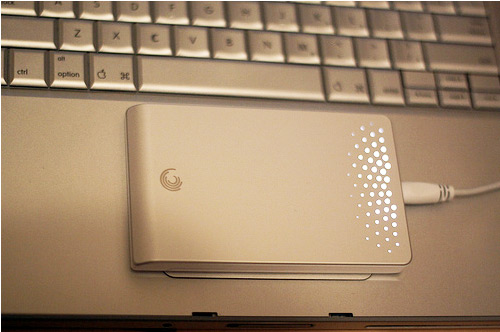 The contest ends December 6th at 11:59PM EST. To enter, all you have to do is leave a comment answering the following question: Have you ever lost important data on your computer - what happened and how do you backup your data now?

The winner will be picked at random, so don't feel pressured to write a parable about your data loss and what you learned from it, although I would enjoy reading it.

The last time a hard drive died on me was with my first Mac: a Mac Mini G4. I was hosting PaulStamatiou.com on it from my dorm and after only a few months of overstressing the drive it gave up. After that I started keeping a cloned drive image (via Carbon Copy Cloner or SuperDuper) on an external hard drive so I would always have something to fall back on.

I've mentioned before that I rely on Amazon S3 to store my documents and personal files safe, and that is still the case. However, for the more important documents that could be used to steal my identity, I encrypt them with PGP Desktop before uploading to S3, even though S3 is already encrypted by Amazon on their end. This protects me in case someone is able to gain access to my laptop and I already have Transmit open (keychain asks for a password before opening), allowing anyone to connect to my saved servers or S3 accounts.

Other than that, some of my media files are in the cloud as described in my cloud life article below, and the bulk of my video files and movies are stored on my HTPC which has 2 750GB Seagate drives. I don't worry about my MacBook Pro's solid state drive dying on me, but I'm more concerned about it being stolen. I have yet to actually use OS X's Time Machine but I should probably start doing that too. Likewise, I've always wanted to try a drobo.

Happy Thanksgiving to those that celebrate it, and Happy Thursday to those that don't. I am thankful for efficient airports. I got through baggage claim and security at Atlanta's Hartsfield Jackson airport in under 15 minutes yesterday.