Final exams are around the corner and I can't help but think how useful Google Docs has been for me this year. They may not have implemented the print layout view (although it is surely nearby) I have been longing for, but Google has completely turned Docs around since their acquisition of Writely in March 2006.

While the recent additions like the ability to edit CSS for Docs and save presentations as PowerPoint files are great, they don't compare to the real reason I use Google Docs - the collaborative features. I have used Google Docs numerous times for writing group papers but I have started using it in another way this semester. I've begun taking class notes collaboratively with other classmates on Google Docs. No longer do I have to worry about typing as fast as the professor speaks and so on. Furthermore, thanks to the cloud, I don't have to worry about Microsoft Word randomly quitting out or kernel panics halting the system and corrupting open documents - I've been there. 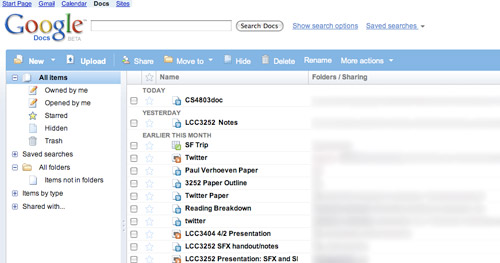 Of course, Google Docs isn't perfect. When using it with 4 or more collaborators, I have found that merge conflicts seem to occur quite often and it becomes rather annoying. When pasting text from other sources, there is no way of automatically reverting to default styling so most people first paste to a plain text document and then copy and paste into the Google Doc. Finally, when collaborating with many people there seems to be a slight issue where styling will be forgotten. That is, Docs seems to randomly bold portions of text and change the size... perhaps if one user reverts to default 10pt styling and another user still had the old styling and added some text it saves that over the first user. Then again sometimes those issues go away after reloading or scrolling up and down a few times.

Other than those issues, Docs falls short of being a complete word processing solution for students. With certain professors requiring the Times New Roman font (not offered in Docs) and a real need for a print layout view, many students end up fine-tuning their documents in Microsoft Word before printing and turning them in.

In the meantime, I will get back to studying and consuming bandwidth at the library..