I make for one bad tech pundit. I proclaimed I was content with my BlackBerry Curve and saw no need for the first iPhone. Three iPhones later, I said the same of the iPhone 4, lured by recent Android devices with impressive hardware specs. Of course, I got the iPhone 4 after cracking my 3GS. I inked my love of netbooks and ignored the first iPad. The XOOM piqued my interest in tablets with impressive hardware specs but the price and lack of apps kept me away. 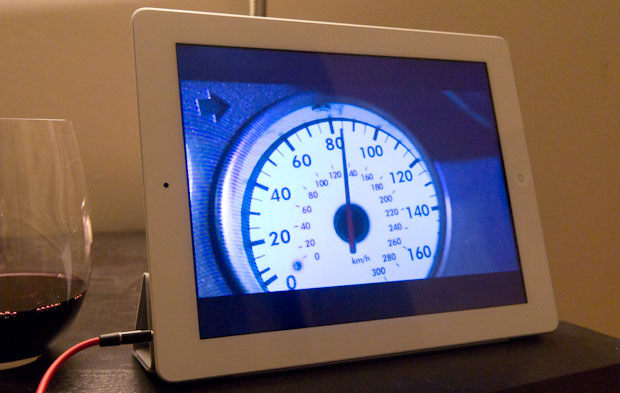 iPad 2 streaming a movie from Netflix. Malbec not included.

Well I picked up an iPad 2 last week (surprise surprise!) and have finally come to the conclusion that my years of gadget yearning should have taught me long ago. It is all about the apps and experience. Hardware matters only so much as it doesn't impede the experience. That's it.

This is not a post reviewing the iPad 2's hardware. Everyone else has already written about it left and right. From the genius of the smart cover and svelte frame to the low-quality cameras. Instead, I want to share how my first tablet 1 is changing how I do things.

After unboxing the iPad 2 I spent a good deal of time scouring through the App Store for news apps. I wanted the iPad to replace a good chunk of my desktop browsing, reading and general Internet consumption. At the very least, it should help with my morning Google Reader skimming and coffee routine. It has. 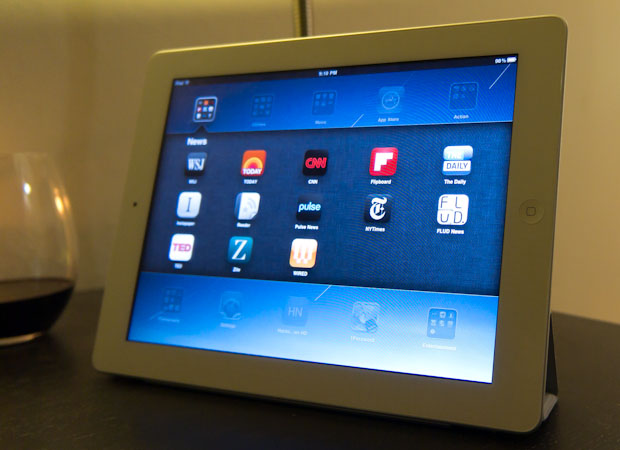 I started installing apps I have heard about thousands of times over. The Daily, Flipboard, Pulse and FLUD. Then I went on to personal favorites Instapaper and Reeder before installing various big name publication apps like NY Times, Wall Street Journal and CNN. Finally, I ventured to magazine apps such as Wired and Popular Science 3.

Steve Jobs was not lying, it is an absolute pleasure to browse the web on this thing. Scrolling by hand just feels natural. The hidden iOS 4.3 multitasking gestures (upgrade to 4.3, attach iPad to Xcode 4, click enable for development) make it a breeze to flip through apps. I can be chatting with Chad in Campfire via the great Sparks app, then four finger drag left to go back to Hacker News HD, and then once more to revisit Reeder, where I have perfected my power user controls — sidebar scrolling with left thumb and main article scrolling with right thumb or index finger. 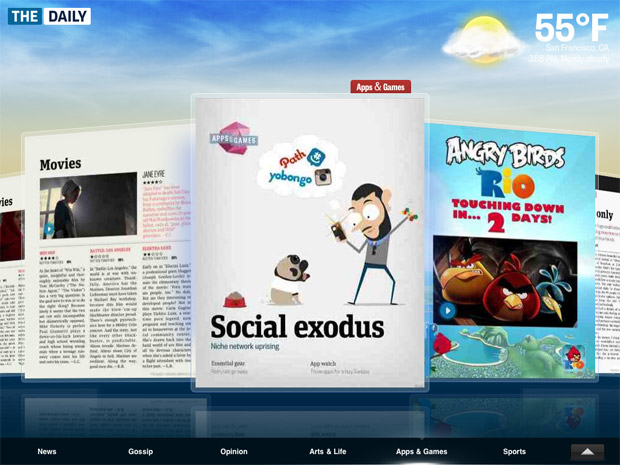 The real treasure for me has been using iPad apps that use tablet affordances to their advantage and engineer interactive news and magazine experiences. While I have only been a tablet user for all of 5 days, no app does this better than Wired. I am not just talking about embedded videos, but pieces of content that ask me to tap things to reveal details, infographics that change with my touch and different scrolling patterns; change article by going horizontally, continue reading the same article by scrolling vertically. This is not your "digital magazine" (ugh, Zinio) experience from years past that are basically just PDF readers. Some might consider this too much work for reading but I categorize it as a utopian experience. What about you? 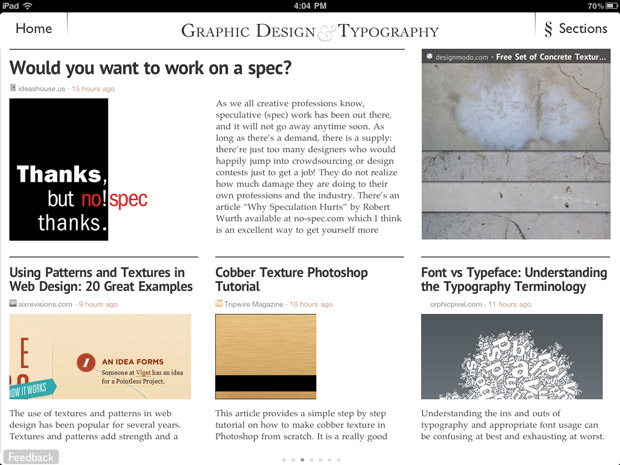 Zite - "the pandora for digital magazines"

I have my Kindle for no-frills book reading while the iPad 2 immerses me into a new world of interactive magazines and publications. With 10 hours of battery life, I'll be prepared for long flights and not have to resort to overpriced airport magazine purchases.

Other iPad apps I have come to enjoy include Terra (web browser with tabs - more convenient than Safari's tabbing style IMO), Yelp, Food Network's In The Kitchen, Epicurious, Photogene (better than Photoshop Express), PhotoSync, 1Password (a must for me), Pandora, Netflix and Aweditorium.

The iPad 2 wields some pretty powerful graphics, making it quite the console alternative for the casual gamer. I don't have any consoles myself and sold my gaming PC last year so the closest I get to gaming has been Tiny Wings or Angry Birds on my iPhone. After playing with some impressive games like Dead Space and Real Racing 2 HD, I'm speechless. The iPad is a serious piece of work. The graphics look fantastic for the display and most such games only cost 5-10.. a far cry from the 50+ price tag on console and PC games.

Here's some footage of me playing Infinity Blade (with one hand while recording).

Taking a step back, this all may sound like blatant fanboyism and new gadget lust. I approached the iPad 2 and tablets in general as some sort of limited capability, locked-down laptop lacking a true form of data input. After getting to know the full iPad experience, my views have flipped. High caliber iPad apps exist for most things I need to do and they make them all more of a joy than a task.

What I've described thus far is my usage of the iPad 2 as a consumption device rather than a creation device. How does it fare for emails and note taking? While typing on the display was funky at first, and still is to some degree, my typing speed is largely uninhibited. And if you really want to get work done, you can pair a bluetooth keyboard to it. I tried that out briefly but quickly went back to the on-screen keyboard.

In less than 5 days, the iPad 2 has become my primary media consumption device. I'm at my desk most of the day and undocking my 17-inch laptop to retreat to the couch is always a chore. Instead I just pick up the iPad and head to the couch or local coffee shop and tap away. Bliss.

Thoughts? If you have a tablet, how does it get used in your daily life?

1 Prior to the iPad 2 I have only ever played with my cofounder's iPad for about 1 hour over the last year.

2 Phrase coined by Steve Jobs when describing new features in iPhoto at MacWorld 2006.

3 Some of these require subscriptions, per issue purchases or at least account registrations. The Daily costs 1 for a week, Wired is 4 per issue, Popular Science is between 3-5 per issue or something like 15-20 per year.