Today IBM announced the launch of a beta test with select partners, clients and vendors for their upcoming BladeCenter S. First announced in late June, the BladeCenter S will be the first desktop blade server system in addition to enhancements such as a wizard-based setup. The beta test announcement confirms that IBM is on-track and moving along with development of the BladeCenter S. But why is this so great?

First off, what's a blade server?

A blade server is a small server built for high-density applications that relies on a blade enclosure to be utilized. Blades are much smaller than traditional rack-mount 1U servers and each blade enclosure can support many blades with power, cooling, networking and things like SAN storage, although blades may utilize their own disks. The end result is a more efficient, hot-swappable server setup with less power and space consumption. 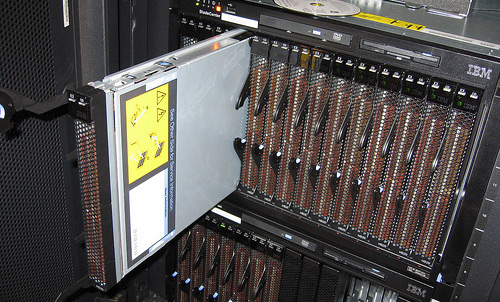 Blades are also easier to maintain with the ability to swap out faulty blades quickly in emergency situations.

Due to their higher efficiency than rack-mount servers, which each have their own power supplies and cooling units, blades often find themselves used in situations where power and real estate consumption is limited (such as in Carnegie Mellon's DARPA Tahoe and cluster computing applications). 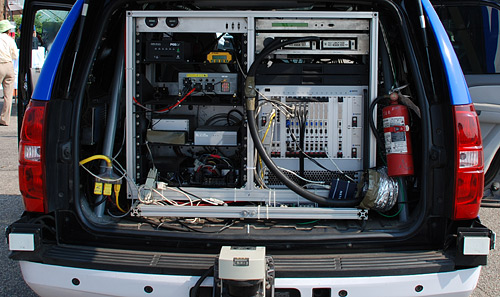 What the BladeCenter S does differently

Up until now, blade server enclosures have been typically mounted in a datacenter with floor to ceiling racks along with other blade enclosures and individual rack-mount servers. IBM BladeCenter S blades and enclosures don't need any special requirements and can simply be put on a table, plugged into a standard US 110V power outlet and work without any issue.

More importantly, IBM has incorporated software to limit the typical heavy reliance upon certified, professional IT administrators to configure the blades, allowing "clients to easily deploy blade systems following a wizard-based installation interface." Put this in the context of a small business or even a startup and you can see the gains - reduced setup and maintenance costs.

While IBM aims the BladeCenter S at small to medium-sized businesses, I find it even more fitting for startups. Granted I have essentially no business experience beyond what I read on the Intarwebs, technical needs with startups is all about being able to scale and handle going from unknown to 15k+ users while keeping the bill low until your VC/Angels come through with the money (or without funding if you prefer Getting Real). Blades are ideal for that situation; start with one blade on launch day, add two more when you start getting 100 new users per hour and so on. You can have the BladeCenter S enclosure and a T3 line in your office, making it easy to manage your hardware without having a dedicated IT guy waiting on you hand and foot. When its time to move to a managed datacenter or colo, BladeCenter S blades are compatible with all IBM BladeCenter blades so you can just move them out, while retaining the BladeCenter S enclosure to run as a local development/intranet rig.

In conclusion, I couldn't think of anything else to write about. However, school started today and I'm taking quite a few computer science classes: CS1050 - Discrete Math, CS3750 - User Interface Design, CS4001 - Computing & Society (probably the hardest but the most interesting - the textbook talks about things like intellectual property, internet law, encryption, computer crime, etc), CS4660 - Educational Technology, in addition to wrapping up my web dev work for Georgia Tech Solar Decathlon, being a pseudo blog consultant for the admissions office and participating on the Registrar's Advisory Board.