When family, friends and acquaintances find out I am a computer enthusiast, they usually assume that I am also a big gamer. The opposite is true as I have haven't played any games of my own in years - such is the curse of the Mac user. I don't own a Wii, XBox 360 or PS3, let alone a decent TV. It's just me and my MacBook Pro. It's not that I don't enjoy games, it's just that I don't own the right hardware to play games. That and when I did play games I couldn't help but think my time could be better spent doing something productive, but I digress..

Back in the day I was an avid player of Counter-Strike, Half-Life, Medal of Honor: Allied Assault, Call of Duty, Battlefield 1942, Gran Turismo and other such games. I had a Shuttle SFF PC loaded with an ATi Radeon X800Pro (hot stuff back then) and a spiffy 17-inch 12ms Samsung LCD. I used to attend competitive LAN parties, mod my computers, and overclock to the point of hardware failure, although I did earn a spot the Futuremark 3DMark03 Hall of Fame for a while.

Over the last few years that I've been a spectator to the gaming scene, I have seen a lot of games that tickled my fancy. Last night I rekindled my old gaming desire as I watched my gaming-enthusiast roommate install and play Crysis. Crysis is arguably the most advanced PC game out right now and is related to the game Far Cry from the same developer years prior. Crysis has a remarkable physics and special effects engine with a powerful lighting system and smarter enemy AI. It also helps that the tropical island-focused graphics are stunning. 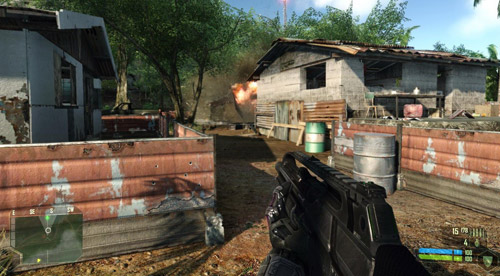 Graphics blur when you run through the jungle and the world is no longer static. There are natural hazards like earthquakes and tornados to watch out for in addition to those pesky aliens and pernicious North Koreans. As with all cutting-edge PC games though, if your computer hardware isn't recent you'll be playing with all the stunning effects turned down.

When I'm not on my computer, I'm usually strapped to a Sparco racing seat, driving in my car. I'm a true car nut and only the pure attention to detail in the latest Need for Speed game can keep me engaged.

The same goes for the latest in the popular Xbox racing series Project Gotham Racing. Tons of great cars with accurate capabilities and engine sounds. I've played the demo at a friend's house; everything about the game was surreal.

How can you not play the latest game in the Super Mario line, especially when it's based in space? Super Mario Galaxy boasts perfect or near perfect reviews on every gaming website, making a must have regardless of whether you're 5 or 25. Now if only I could find a Nintendo Wii for sale.

What games do you play, if any, or want to play? What consoles do you vouch for, or do you only stick with PC gaming? If I had to choose out of any console and a PC, I would probably pick the Wii. While it doesn't have intense racing/FPS titles, there's a different kind of fun factor involved and there's no risk of having a recalled or Red Ring of Death Xbox 360.