After reading a quick meme post on Kevin Lim's blog, I thought I would take a break from coding to join in on the fun and briefly show you what I take to classes everyday. Compared to Kevin, I keep things light (albeit not too light with the MBP) with primarily just my laptop and a notebook. 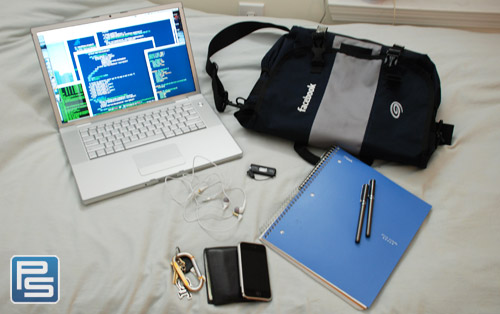 I actually prefer taking notes on paper. When it comes time to study for a test I would much rather flip through physical pages rather than tabs in Safari. I've been a fan of Uniball Deluxe Micro pens for quite some time so I always keep a few in the bag. Speaking of which, I use a Timbuk2 laptop messenger bag. One complaint I have with the Timbuk2 is that there really isn't much room left with a laptop and a single notebook. I brought a textbook to class today and the Timbuk2 was almost overflowing.

The last of the luggables includes a 4GB Sandisk Cruzer Micro USB stick and Sony in-ear earbuds. The in-ear earbuds are crucial for when I have some downtime between classes and find a nice place in the College of Computing to hide and consume precious 100Mbit bandwidth.

What do you take to class/work everyday?

As for all those TextMate windows open on the MBP, I've been hacking away at an expansion of sorts for this site. In other news, my roommate won Gigabyte's overclocking contest this past week. He dragged me across town to hunt down an Intel Core 2 Extreme QX9650 - a 1200, 3 GHz quad-core processor that he cooled with a self-built cascade cooling system, pushing the chip to 5GHz at -72 Celsius under load. Quite a waste of my parking spot in the garage.