Update 12-18-2009: Check out the official Skribit launch details here and on TechCrunch. I haven't really talked about Skribit in any depth yet, so this shall be my Skribit 101 post. Skribit is a web application sprouting from my idea along with many talented co-founders at Startup Weekend Atlanta. First off, I'll tell you what it isn't. Skribit is not some blog commenting system as others have believed it to be.

Instead, Skribit provides bloggers and readers with a unique form of interaction. Bloggers put our widget module on their blog and readers may suggest (anonymously or through an account) article topics through it. Readers can also vote for these topics. However, the widget does not just show the top 5 post suggestions. There is an algorithm behind it that displays suggestions that are hoppin' based on recency, number of votes and a few other factors.

Furthermore, the Skribit homepage will become a portal for showcasing the popular suggestions across all genres of blogs. I envision it being the place to go for "tomorrow's news". At the moment, we are focused on nailing the blogger-reader interaction aspect and will expand from there. Many people have asked me how we plan to make money and to that my reply is that we have a business plan but it won't come into play just yet.

You expect me to put a widget on my blog?

Some of you may find it quite ironic that I am behind a startup primarily dealing with a widget after I wrote that I am not a fan of blog widgets. Here's my stance: widgets are worthless unless they provide real value. In this case, the value is the gained reader interaction. Comments are great for getting feedback on a particular topic or post, but Skribit aims to facilitate reader involvement over the entire blog and even direct where the blog's content is headed. In return, blog authors will love Skribit for giving them ideas on what to write about. My Leopard post was related to a Skribit suggestion from a person asking me if Spaces was the best feature in Leopard. And it looks like I'll be writing about iPhone 2.0 soon as 88 people have voted for that Skribit suggestion.

As for the general negative aspect of widgets, that they are slow to load and hinder the entire website's performance, Skribit uses iframes at the moment, which do not mess up page loads should the widget fail to load for any reason. Down the line, I can see platform-specific plugins that communicate with Skribit every X minutes and store results in a local XML file (like TLA does it).

Any questions? For those wondering what my specific role in Skribit is, I see myself as idea guy + front-end development including minor Rails work and lots of CSS/HTML tweaking. Skribit seems to be a great way for me to jump into Ruby on Rails development which I've never touched before. Oh and yes, widgets will be fully customizable in the near future. I know that not everyone has a green blog.

As a sidenote, Skribit would not be possible without Basecamp and Google Apps. Both proved incredibly useful. 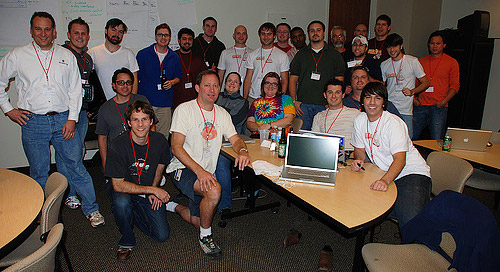 Team Skribit on launch night. I'm in the front in white.

Skribit is currently in private beta for the Skribit team but we plan on having a public beta very soon (weeks). For those wondering why most startups have all these beta releases - in addition to general application testing and stability, we're doing it so we don't fry our servers should this thing takeoff. Skribit has the potential to go viral as it is a blogger-centric tool. If bloggers like something, they'll blog about it and the cycle continues. Also, since this is a widget service every page load of our users is a page load for our servers (plug: Skribit's servers are (dv) boxes provided by Media Temple). For example, 10,000 users multiplied by 1,000 page views per day (random numbers I made up) would mean 10 million pages to be served by our server each day. 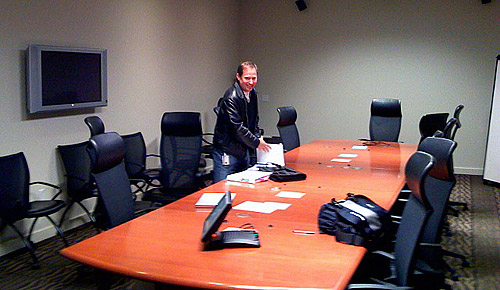 The Skribit team has a lot of development ahead so don't form your thoughts about Skribit just yet. One thing's for sure though - I am devoted to this project and want to see it become something amazing. That and there's no motivation as powerful as trying to prove Michael Arrington wrong after he stated "I donâ€™t expect much from Skribit."

I was interviewed by Rev2.org regarding what exactly Skribit is, so that's worth a read if you're interested. As long as I'm linking up recent interviews, here's one on ChrisMarshall.ws and another on Away.gr

On a personal note, my grandfather passed away on Thanksgiving and I will be flying to his funeral, so I don't think I'll have time to update here for a few days.

"What is Skribit?" by @Stammy