VMware, the creator of native x86 virtualization in the late '90s, has released their first consumer-directed product for Mac users. VMware Fusion allows OS X users to run virtual machines with support for over 60 Operating Systems. You might be thinking, "well Parallels Desktop does this too, what of it?". I learned of Fusion's remarkable features and advantages while participating in their conference call this morning.

Fusion was built from the ground up in OS X's native programming environment, Cocoa, and as such Fusion benefits from speed increases and lower memory overhead. Fusion puts less strain on your computer than any other virtualization product at this point. The use of Cocoa in development gives Fusion a more native Mac application feel with customizable toolbars.

VMware Fusion supports running different VMs at the same time. Granted that you have a decent amount of RAM in your system, you can run Windows Vista and Ubuntu side-by-side within OS X. However it should be noted that while there is substantial Windows Vista support, Aero graphics is not included in that. 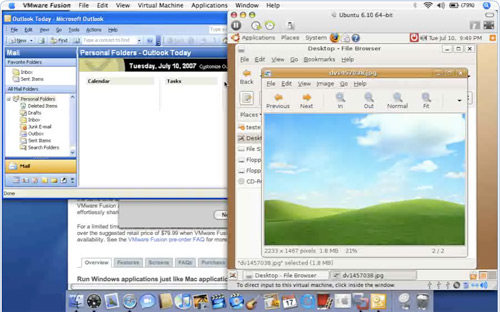 In addition to running multiple VMs simultaneously, you can provision multiple virtual processors within a VM as well as run 64-bit OSs, assuming you have a 64-bit Intel Core 2 Duo or Xeon processor. Essentially, Fusion seems to be the most complete platform for Mac users when compared to Parallels Desktop.

Drag-and-drop between a VM and OS X works flawlessly, although you cannot drag-and-drop files directly from one VM to another. However, there are also shared folders that come in handy in this situation.

During the conference call VMware made sure to tell us about Fusion's seamless, automated installation procedures. Rather than having to go through every Windows XP dialog during installation, such as deciding how you would like to format your drive, Fusion takes care of all the nitty-gritty details for you. After installation, VMware Fusion can also install necessary drivers for Windows. As an example, the iSight camera in an Apple MacBook Pro works fine.

Transferring and managing your VMs is a trivial process with each VM contained in a single file, should you want to move it to another Fusion-bearing Mac, et cetera.

Unity is essentially VMware Fusion's equivalent of Parallels Coherence - a feature that lets you run Windows apps as if they were Mac apps. That is, you don't have to have the full Windows desktop present at all times. However, Fusion's implementation in Unity is more realized with the Windows apps working fine in conjunction with Expose and the dock, without needing to have the Windows task bar present. At the moment, Unity only works with Windows and not Linux or anything else. 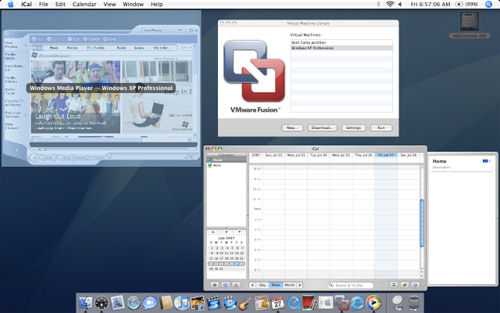 VMware Fusion retails for 79 starting today (not including 20 MIR), finally giving users a choice instead of just defaulting to Parallels. But is it worth it? I would choose Fusion over Parallels Desktop just for Fusion's speed enhancements. Working with Cocoa was a smart move that will definitely be noticed with users not overloaded with RAM like I am. In a screencast, Fusion was shown running on a MacBook Pro with 2GB of RAM while simultaneously running a Windows XP VM and a 64-bit Ubuntu VM without any apparent slowdowns.

On the other hand, if you have a Mac Pro with 16GB of RAM, Fusion can support that as well, allocating up to 8GB of physical RAM to each VM. I was thoroughly impressed with Fusion and I have been using Parallels Desktop for over a year now. If I get VMware Fusion running anytime soon, I will attempt to run a few comparison benchmarks between a Windows XP VM in Parallels Desktop and a Windows XP VM in Fusion to see if there are any discernible performance differences.