Dropbox is the recently-launched YCombinator-backed startup that aims to seamlessly sync files between multiple computers as well as act as a conduit for backing up files to the proverbial cloud. They have been the subject of some great reviews and truly deliver what they claim. That being said I don't plan on reviewing Dropbox, rather I am going to put out my concerns for why I won't be using Dropbox full-time just yet.

Let's say you have a PC and a Mac that you constantly share files between. Up until now you might have been emailing files to yourself, made use of file-sharing on a home network, toted around a USB memory stick or shuttled an external hard drive between them constantly (bonus points if you said use JungleDisk sync). Those are all burdensome tasks and aren't bulletproof for when each computer is not in the same building. 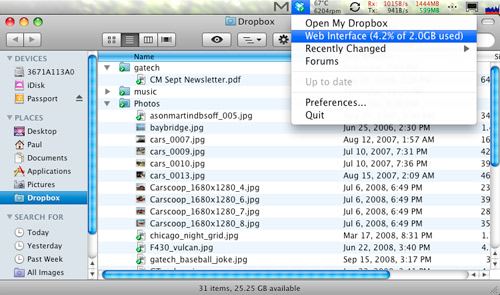 Dropbox approaches this problem and goes a step further with shell integration for a Dropbox repository (I say repository out of nature.. dropbox can handle file revisions), shared folders and the like. The OS integration is what is phenomenal about Dropbox, and no OS was left behind: OS X, Linux and Windows are all supported. It's much easier to work with than having to open up an FTP application or Amazon S3 client and manually sync or move files. The TortoiseSVN or SCplugin-like UI is a fine touch as well.

In addition to all of that, there is a web interface where you can access your files as well. 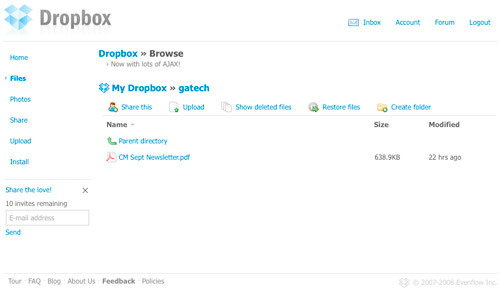 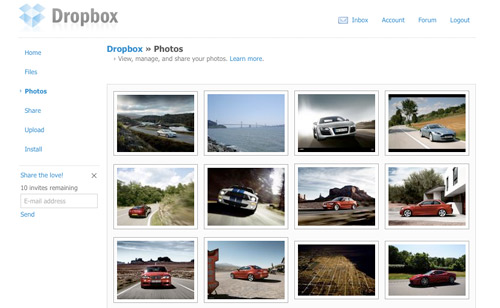 Dropbox currently comes with 2GB of free storage, which is in turn stored on their Amazon S3 account which they further secure with their own AES-256 encryption in addition to using SSL before anything is ever sent out. Overall, I would absolutely, 100% recommend Dropbox to the regular user that wants to easily sync files between computers while just as easily be able to share them with others. I particularly like being able to right-click a file in the public folder and get a public URL for it.

The seamless integration within the operating system is of paramount importance to the user that would otherwise be clueless to setting up their own S3 account and backing up manually. In the near future Dropbox will sell paid accounts for "richer sharing options and more storage" so you won't have to worry about 2GB not being enough.

I probably do not represent Dropbox's target audience and my concerns are almost on the order of devil's advocate but here's what I'd like to see in the future:

I'm not trying to knock Dropbox by listing out such feature ideas. Dropbox is the slickest file storage and synchronization solution I have seen, period. If I wasn't as paranoid with security, I would be very, very happy with it. But just think, what would the enterprise do?

Disclosure: I had stir fry with Drew, Arash and Aston earlier in the summer.