Skilled Apple TV tinkerers have been able to get Mac OS X, in its full and uninhibited form, running on an Apple TV. I think this is essentially the tipping point for Apple TV sales as the functionality went from great to infinite in less than a week from when I reported that the Apple TV could be modified to play just about any video file type.

A complete replacement to the Mac OS X kernel has been built which allows the full version of Mac OS X to be run on an Apple TV. Semthex wrote a processor emulation for the kernel, to sidestep the hardware restrictions that previously disallowed Mac OS X from running on the Apple TV. 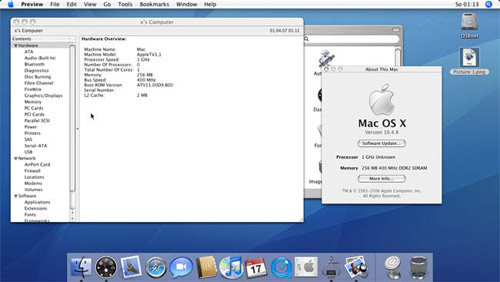 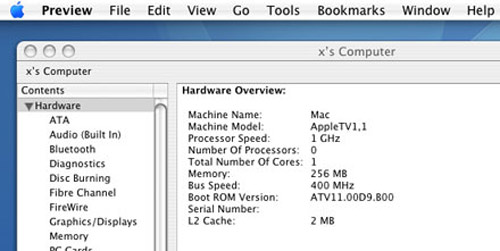 While the 1Ghz Intel Pentium M Dothan-core processor is great for decoding video on the fly and managing the Apple TV interface, I think it will lose steam in OS X.. especially with only 256MB of DDR RAM. However, you get a capable media device turned computer for 299. It's now possible to have a local file server, web server for tinkering with PHP/RoR, torrent box and just about anything you can think of, short of gaming and Photoshop.

However, the most probable use for this new hack would be browsing the web on your HDTV, something that A-list bloggers like Scoble (or was it Rubel?) have been hoping for on their twitter streams. With the ability to utilize the Apple TV's USB port for a keyboard and mouse discovered this week as well, this is a reality. Imagine watching Netflix streamed in your browser on your TV, via Apple TV. Or, as the author of AppleTVHacks.net suggested, you can utilize your Apple TV to use Joost - although I highly doubt it would run well with Joost having system requirements of 512MB (even more is recommended) of RAM.

There are still a few questions in the air though. In the OS X "mode" as I'm calling it, is it easy to switch back to the Apple TV GUI or is this a permanent one-or-the-other type of situation? Also, many of these Apple TV hacks are NOT for the faint of heart. Before attempting any of these Apple TV hacks, modifications or whatever you want to call them you can't have any second thoughts about voiding your warranty, messing with delicate electronics or poking around the filesystem.

Due to the complexity of performing such actions, companies like PowerMax are sprouting up with services aimed at providing enhanced Apple TV functionality (at the moment, they can install a larger hard drive) at a hefty cost.

Okay so now I'll throw the question at you again - are you going to get an Apple TV? For me, the ability to do anything with the Apple TV is satisfying but the largest TV in our off-campus pad is a breathtaking 20-inch CRT without component inputs. I'll stick with my 24-inch iMac thank you very much.