While I was content with my BlackBerry Curve mainly for my ability to type rapidly on the keypad, recent events including the ability to easily change ringtones through iTunes and Google providing free IMAP access influenced me to pick up an iPhone along with Leopard this weekend. I was going to wait until January to see if any GPS and 3G iPhone rumors came about but I'm glad I finally caved. Here are my long-awaited thoughts on the iPhone. 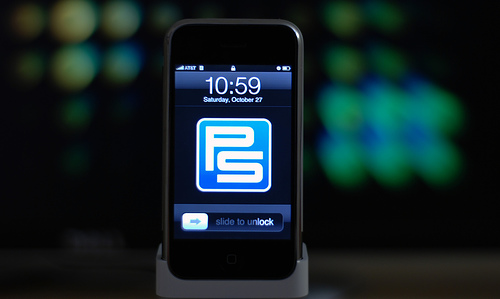 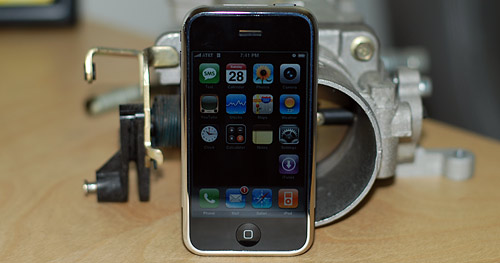 The iPhone posing with a Mustang throttle body.. why not? The iPhone's screen is much brighter in person, the flash makes it appear dim here.

The iPhone's screen is surreal. Vivid colors and black blacks all while being as bright as you need.

Wow, just wow. Pop the iPhone into the dock and fire up iTunes. I just had to go through a few pages, tell it that I was a current AT&T subscriber, select a plan and my iPhone was 100% operational in 10 minutes and my BlackBerry was disconnected. No SIM card funny business necessary. I did, however, have to manually enter in my contacts from my BlackBerry to OS X's Address Book, which got synced the next time the iPhone was connected.

In my eyes, Mail is the iPhone's killer app. Some people say it's Safari or the slick iPod features but for me it's all about Mail. Now I can whittle away at my inbox on the go, with ease. I had used the Gmail Hosted mobile app on the BlackBerry but it can't handle HTML and other basic email necessities. BlackBerry has a no frills email client which just does it's job, nothing else. Flicking the screen to go through emails on the iPhone is a blast and much faster than repeatedly fiddling with a scroll ball. 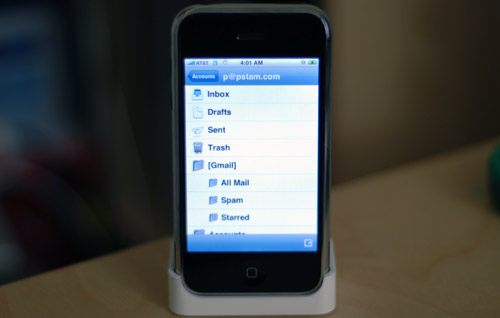 Unfortunately, it is not possible to write emails in the horizontal position, which creates a larger on-screen keyboard, but it's not a big deal. One small quirk is that when dealing with multiple email accounts you have to tap four times to switch between them (back > accounts > select other account > inbox). I could imagine a series of dots you tap to switch accounts, similar to virtual desktops in the task bar on Linux boxes or the way iTunes has dots over the new releases box.

Deleting emails in Mail on the iPhone is much better than going through a menu like on other mobile devices. There are two ways: 1) slide your finger horizontally across an email while in the email list layout and tap the delete button or 2) tap "Edit", then the red icon and the delete button for each email. 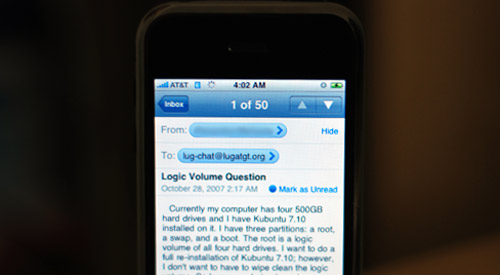 AT&T's EDGE network is pathetic when accessing regular websites, but it's not bad at all when visiting mobile-optimized sites. According to DSL Reports' iPhone speedtest, my iPhone's EDGE download speed in midtown Atlanta was 153kbps with an average latency of 500-600ms. Compare this to 384kbps and up to a megabit or more (with EVDO TIA-856 Rev 0/A/B and HSDPA) for 3G connections and you'll see why people don't think too highly of EDGE.

Naturally, I have been typing slower on the iPhone than with the tactile-feedback BlackBerry. However, I do expect this to change after I learn the exact placement and trigger points for each key. Currently, I often trigger a key next to the one I was aiming for and have slowed my typing down to improve my accuracy for now. Also, you need to somewhat lift your finger from key to key, instead of sliding it over like you might on a physical keypad; although, the iPhone has the ability to detect if your finger is hovering over a key to some extent. Of course I am just saying this to convince myself that I am happy with my purchase, so the real test will be if I still type slow in a few weeks.

I love the effort Apple put into the Alarm on the iPhone. Many people in college and more use their cellphone as an alarm clock or backup alarm, so it's quite important to be able to easily set alarms. On an older Pantech C300 phone, I had to go through hoops to get to the alarm and had memorized the keys to press: Menu-7-5-1 if I recall correctly. On the iPhone, it's just one tap away and you can set alarms to repeat on any day of the week you wish. 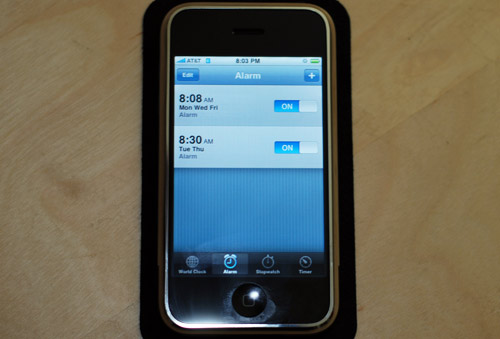 Overall, I am a happy camper. I didn't even mention the hacking potential for the iPhone that can add incredible functionality to the iPhone. I plan on modifying mine to add a terminal so I can SSH into my server on the go. The only thing I am concerned with now is keeping it safe and scratch free. I purchased an Incase Protective Cover but I am now finding out that it traps dust/dirt and scratches the chrome, so I've stopped using it until I can find something better. 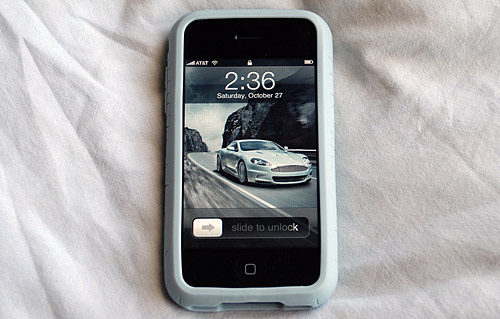 One of the only negative things I have to say about the iPhone is the way the camera works. I take a ton of mobile pictures from photo-worthy sightings on campus to spotting Lamborghini Spyder LP640's on the road. Since the "take picture" button is on the screen, it is hard to press when you're not looking at the screen (eg, you're too busy driving) or trying to get yourself in the frame. Also, sending a photo you just took to Flickr is an 8 tap process, assuming Flickr is already a contact. With the BlackBerry Curve, I had gotten it down to a natural reaction and was able to unlock the phone, hit the camera button, snap a picture, and upload it to Flickr all before the subject was out of sight. Mapping the camera to a physical button might have been against Apple's simplicity goal and the camera integration (no flash!) seemed like an afterthought on the iPhone.

I have skipped over dozens of iPhone features in this post, only mentioning the ones important to me but if you'd like to get my thoughts on a certain aspect of the iPhone feel free to ask me in the comments.