Up until now there had been only a few tools to help web developers assess the speed and optimization status of their websites. Primarily, there is the Net tool of the ever-popular Firebug add-on for Firefox. The Net tool can tell you what a website is loading, how long it takes, if it's cached, headers and similar items. Yesterday, Yahoo! released their own add-on to Firebug called YSlow.

YSlow rates your website or any website at all for that matter based on Yahoo!'s own rules for high performance websites. The rules aren't for the faint of heart and envelop 13 rules including commonly overlooked ones such as Expires headers, Content Delivery Networks, and ETags. This is where my criticism for YSlow comes into play. I think YSlow should have a setting for different levels or types of websites to test. Perhaps one level for blogs, one level for corporate websites, another level for mission critical e-commerce sites and similar.

For example, I don't think one can honestly dock points from a blog with less than 20k pageviews/month for not using a pricey CDN. Also, the weight of different rules seems to be off. The benefits of a CDN or ETags aren't on the same level as the benefits of say, gzipping all CSS, JS and XHTML. My point being that YSlow's grading algorithm is rigorous, with Yahoo!'s own YSlow download page earning a D/61 score. 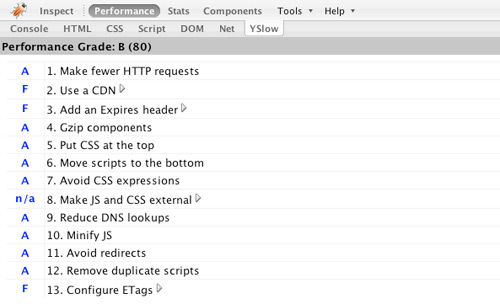 However, with YSlow being released by the Yahoo! Developer Network, it is quite possible they only intended YSlow to be utilized by upper-echelon developers for global corporations with extremely high-trafficked websites. Nonetheless, YSlow is very handy, seamlessly adding onto Firebug. 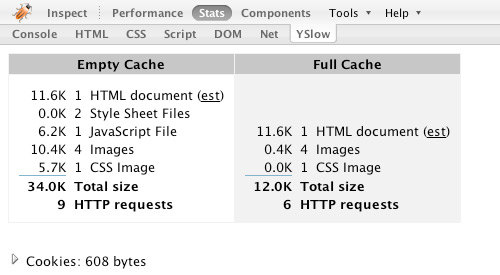 Clicking on any of the arrows or magnifying glass icons within YSlow displays more information about the corresponding high performance rule and how it applies to the current site, or displays the headers for a particular website component, respectively.

What are your thoughts on the Firebug YSlow add-on? As a sidenote, I think it's great that Yahoo! is working on a Firefox product and releasing their work to the community.