Not too long ago I mentioned how I moved to a new apartment but was very disappointed to learn that I now live in an AT&T dead zone. A bit of testing has proved that I do not live in an AT&T dead zone (5 bars on the sidewalk outside), but the building's stucco and concrete with rebar construction dampens reception considerably, to the point where I get no service closer to the middle of the building and just 1, maybe 2, bars next to the window. I did a bit of Google and Twitter querying and found a local Atlanta company called Wi-Ex that manufactures a set of cell phone signal boosters. 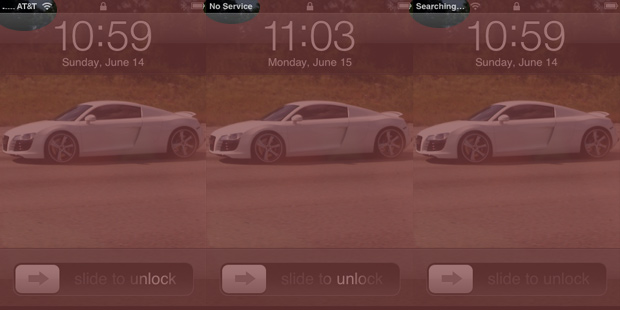 Before: This is what I typically see on my iPhone 3G.

After: 4-5 reception bars within ~6 feet of the zPersonal's boosting antenna.

After a bit of prodding around their product line-up, I decided on their 169 USD zBoost zPersonal YX300 cell phone signal booster (although it can be found for 59 USD on Amazon at the moment). Most of their other products rely on an antenna mounted outside your building or in your attic, which I can't do due to living in a leased property. 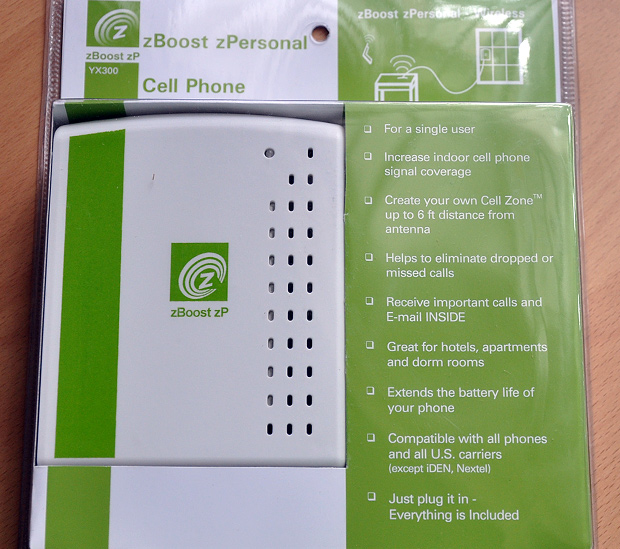 The premise behind cell phone signal boosters, the zPersonal included, is pretty simple. There are two antennas. One goes nearest the area of the room where there is some cell phone signal reception. That signal gets processed and amplified through the powered unit and gets pumped out the other end, which you place close to where you need reception. Both antennas are used for receiving and transmitting, with the one mounted where there is reception being the actual end point talking to cell phone towers. It's important to understand that such a device cannot just make a signal. It has to use at least a weak signal to boost.

This particular zPersonal YX300 is a dual-band unit that receives and amplifies the 800MHz and 1900MHz bands and is compatible with all U.S. carriers regardless of technologies (GSM, GPRS, CDMA, TDMA, AMPS, EDGE, EVDO, HSDPA, 1xRTT) except iDEN (ex: Boost Mobile, Nextel, and Sprint's Direct Connect) and 1700MHz AWS (T-Mobile US 3G). That means it works with my GSM iPhone 3G.

Depending on your room layout, setting up the zPersonal YX300 should be a painless process. The zPersonal is made for a single user at a personal workspace and as such has a small range of 6 feet (radius from the antenna). I chose to install it near my desk. The first step is finding a place on your window where you get the best signal and mounting the main unit there. Contrary to popular belief, the plugged in unit goes on the window while the external antenna goes near the workspace. 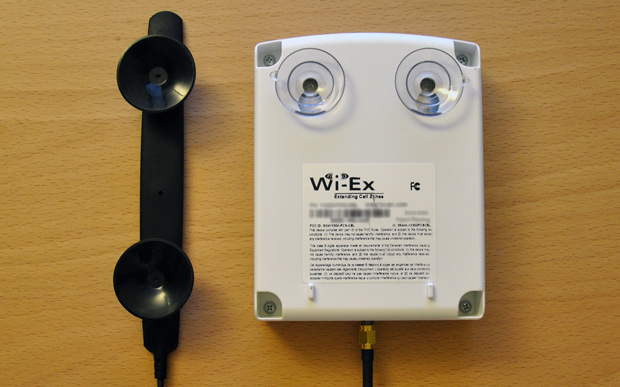 After I spent a while moving my phone across the window like a stud finder and found the optimal reception zone (2 bars), I mounted the YX300 base unit... only to have it fall down on its own minutes later. This happened a few times until I cleaned both surfaces and dampened the suction cups. I suggest the next version of the zBoost use one large suction cup like automotive GPS devices.

The last steps of the installation process involve placing the external antenna somewhere near your workspace and connecting the base unit to a power outlet. I chose to place the antenna on my desk.

Once installated and powered up, the YX300 should display a green light that means everything is okay and it's idle. When you're on a call the light will flash to indicate it is handling the call. If it turns solid green while you're on a call, you need to be closer to the antenna for it to continue processing the call. That being said, it works. There were a few times I experienced where my iPhone, when idle, will revert back to low signal but when I unlock it and start doing stuff it goes right back up to 5 bars.

When I first started using the zPersonal I had many frustrating experiences where the base unit would show the green light and I would get a good signal, but then 10 minutes later it would start flashing red. I would power cycle it and it would show a green light again, and then show the same flashing red light. After this happened a few times, I experimented with the location of both the antenna and base unit. I haven't had any issues since then. Location is everything with this cell phone signal booster.

As Wi-Ex states, the zBoost zPersonal is meant for workspaces and provides a "personal cell zone." I found this to be accurate, and sometimes a little bit of an underestimation. I get 3 bars in the kitchen about 15 feet away when I used to get 1 bar. The bedroom which is another 15 feet past the kitchen still gets "No Service" but I didn't expect the zPersonal to help me out there.

I did a quick search of the YX300's FCC ID (SO4YX300-PCS-CEL) and found an RF Exposure Certification Test Report: 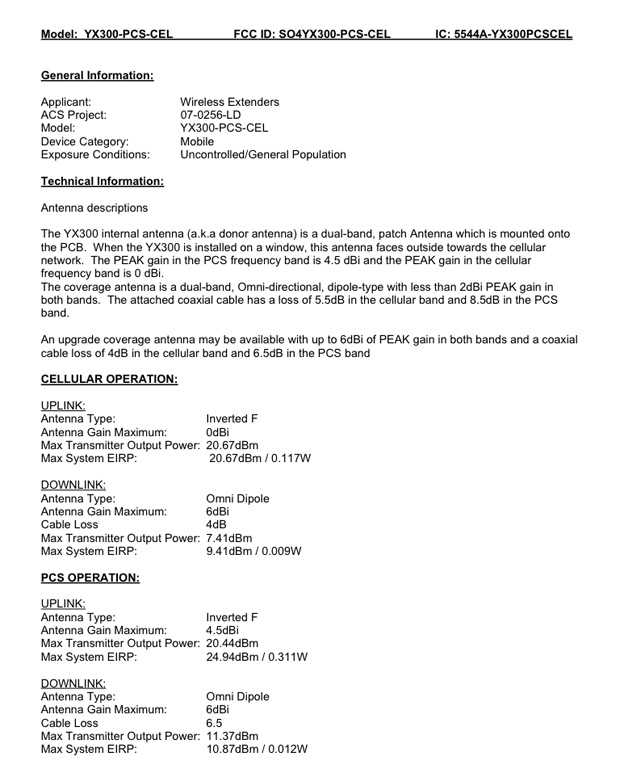 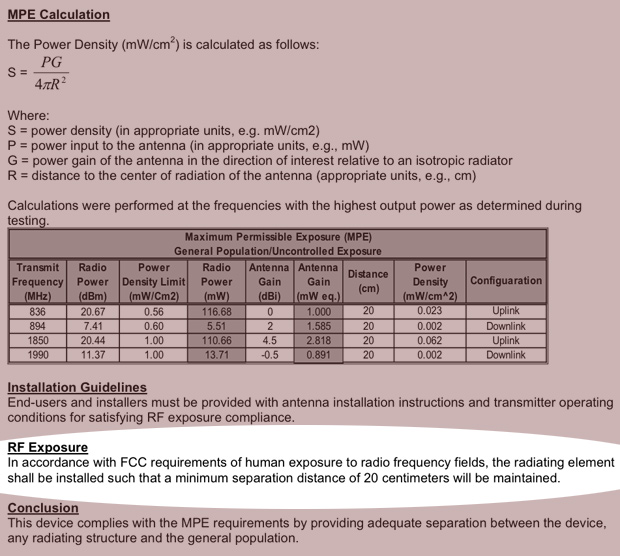 If I wanted to nitpick, I could say that the EPA power density equation is for isotropic antennas which technically can't exist for a number of reasons (good read) (and for which they use decibels relative to isotropic radiator), but I digress.

So you're probably thinking that this is no biggie because you work next to about 25 Wi-Fi networks. Take for example my Linksys WRT54G2 wireless router. It has a "typical" transmitted power output of 18dBm, compared to the peak of ~20dBm of the YX300; pretty similar numbers. The difference is that the YX300 zPersonal is meant to be next to your workspace and transmits more power, where as my router is several feet away. That being said, this is only something to be slightly concerned about if you're on the phone a lot. If not, the idle power transmission and various cell phone tower handshakes won't come near the YX300's peak output.

In short, don't put your head within ~8 inches of the YX300's antenna when you're on a phone call.

After a proper installation, which takes some tinkering, the Wi-Ex zBoost zPersonal YX300 successfully turned my 1-2 bar cell phone signal reception into a 5 bar, 6-foot reception zone around my desk. Call quality was as if I had a normal 5 bar signal. While having a device with wires hanging off my window and running a 10+ foot cable to another antenna can be rather unsightly, I will do anything for 5 bars.

At a regular price of 169 for the dual-band version of the YX300, this signal booster is not cheap. If you are suffering from poor reception inside your building and can find the YX300 for cheaper, I'd definitely recommend it. The YX300 gets 8.5 out of 10 Stammys.

How's your reception at home? Who is your carrier? Could you benefit from a cell phone signal booster like the zBoost zPersonal YX300?