Ben Guild, the 19 year old mastermind behind Mobile17, has just launched a news site dubbed Whitesoap. Interestingly enough, Whitesoap kind of goes against the whole Web 2.0 mantra in that it's not a social environment per se. News is automatically indexed and queued by Whitesoap. Users aren't required to have accounts, are unable to leave comments on stories or post news pieces of their own, yet they are able to suggest stories for the moderators to put on the homepage. 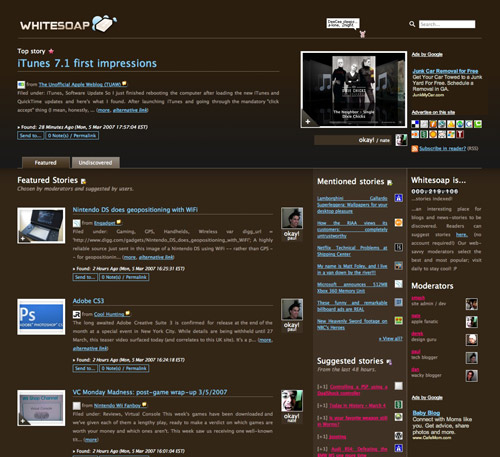 Whitesoap fully utilizes the expertise of a team of web-savvy moderators to filter out the frontpage worthy from the undiscovered.

Featured stories on the homepage look like the entry above. Users may click "Send to" to save the story to the service of their choice. There is also a "Notes" button to check if moderators have left any notes on that story. On the right, you will see a thumbnail picture of the moderator that approved the story. At times there will be the text "votes" and then a number. That means the story has been suggested by that many users.

The image on the left is a thumbnail of the first image within the story. If there is no picture available, moderators will try to attach a relevant image. Clicking on the image will load a full-size version of that image via lightbox. 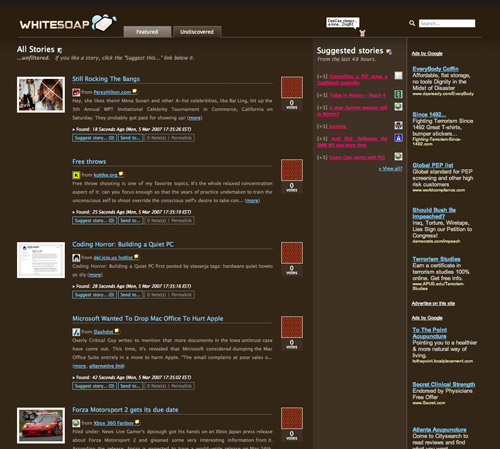 Users can suggest stories by visiting the unfiltered stories on the undiscovered page. Stories are added constantly and if you see one you like, just click on "Suggest story".

Whitesoap doesn't adhere to any genre specifically. Stories are indexed from various sites from gossip to tech and cars. As of this writing, Whitesoap has already indexed 200,000 stories. However, the content on the homepage will invariably be influenced by the interests of the moderators. That's why there are moderators from various parts of the interwebs. For now, there are moderators skilled in all things Apple, tech, design and um.. "wacky".

Whitesoap does have its advantages by not relying on user-submitted content, prone to "gaming", being marred by "the bury brigade" and all the other disadvantages of digg-like sites. Whitesoap can be thought of as a mix between TechMeme and Slashdot - automated yet moderated. Unfortunately, as Whitesoap grows, the need for more and more moderators will grow quickly to keep the flow of news coming.

As far as Whitesoap aesthetics and site features are concerned, there is definitely room for tweaking so if you have any suggestions please drop a comment for Ben & crew.

Disclosure: I am on the Whitesoap payroll and moderate there along with Dan, Derek, Nate and Ben "smash" Guild.