As a user of both WakeMate and Fitbit for the past few months, numerous people have asked me which they should buy. I don't think that's the right question. While both have a bit of feature overlap, they are entirely different beasts and I don't see them as competitors. I'll briefly go through each one and share my thoughts. 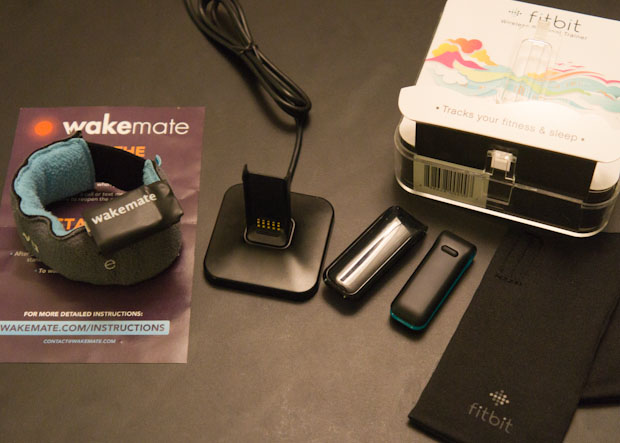 The 60 WakeMate is an interesting bit of kit. It's a wristband you wear to sleep and pair (via Bluetooth) with your iPhone, Android or BlackBerry device running the WakeMate app. It uses actigraphy to track your sleep and wake you up during a 20 minute window you specify; aiming to reduce your morning grogginess by waking you up when you are nearest to a light phase of sleep.

I preordered my WakeMate in November 2009 and finally received it 13 months later, due to various widely publicized manufacturing delays. But this post isn't about their past, it's about the product. I hesitated writing this post until the WakeMate folks had some time to work out the kinks. The product has a snug-fitting wristband (to be worn on your non-dominant hand) that started getting fuzzy and losing WakeMate letters after two months. The battery is good for about two nights.

The iPhone app is actually pretty slick. I really enjoy the simple interface for setting the alarm — two sliders for hour and minutes. No extra menus to save the alarm like the iPhone's native clock app. The problem I had was getting the app to pair with the phone and stay paired. Well technically it is not the actual Bluetooth connection but some sort of state the band must have to properly begin logging data. If WakeMate didn't think this was good, it would prompt me to power cycle the wristband. That would then require waiting 20 seconds for the app to realize it was back on again. At worst, this would happen two or three times in a night. All I know is that I got frustrated with it.

For example, I would set my alarm, flip over to Angry Birds for some pig punishment, then flip back to the app (app must be in foreground when you go to sleep) before locking the phone. Maybe 30 seconds later WakeMate would start buzzing telling me I needed to power cycle the wristband to get it working properly. Of course, I later realized this was not the proper way to do things since WakeMate was already be logging and later calculating that into the "time to fall asleep" metric. Moving on.

Does it work? I can't say I have ever felt better in the mornings using WakeMate to wake me up, but I really like the sleep metrics it gives me. These are just two screenshots. WakeMate also provides movement data, breakdown of how long you were in each phase of sleep per night and so on. 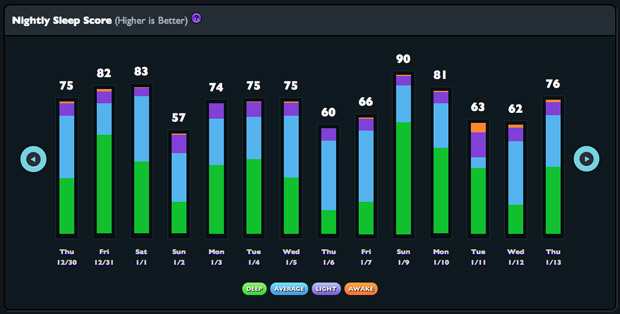 You can also tag your nights when setting the alarm. For example, if you are really stressed out at work you might want to tag it work and then later on compare your stressed out sleep with other logged nights. 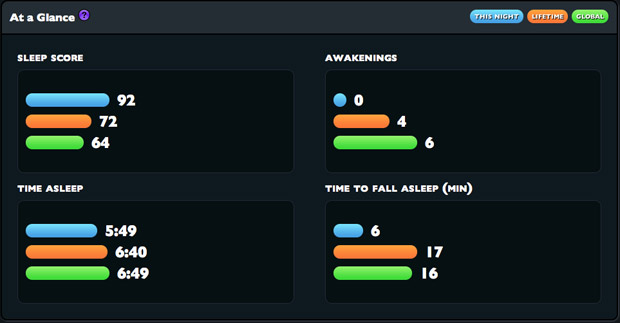 That being said, I never really learned anything about my sleep patterns from this data. It's nice to look at but there's no intelligence sprinkled on top. Every night WakeMate had logged still only said "your sleep quality was about average."

However, after the novelty of the sleep metrics wore off I found myself not using WakeMate anymore. It was too much of a hassle to ensure the wristband was charged, put it on, turn it on, open the app, wait for it to recognize the wristband, set the alarm, lock the screen.. then realize I wanted to check something in another app before going to sleep, then flipping back to WakeMate when I was done, only to have it complain that I needed to power cycle the wristband and reset the alarm. Arrgh!

The Fitbit on the other hand, is more about your daily activities than your nightly sleep health. At first glance, it's a glorified pedometer selling for 99. But you're not just buying the hardware, you're buying access to a comprehensive logging and tracking system, with additional analytics available for an extra 50 per year. Setup is pretty easy. Just plug in a USB charging station/dock, install some software and login for the first time to setup your profile and tell the system about your weight and height.

The Fitbit has a sexy VFD-esque display that reminds me of 90's VCRs.. I love it.

From then on you just clip the Fitbit onto your belt or anywhere else comfortable (it suggests women like wearing it on their bra) and go about your daily business. Throughout the day you can tap a button on the Fitbit to see how may steps you've taken so far, miles traveled and calories burned. You don't even need to use the website if that's all you want to know. 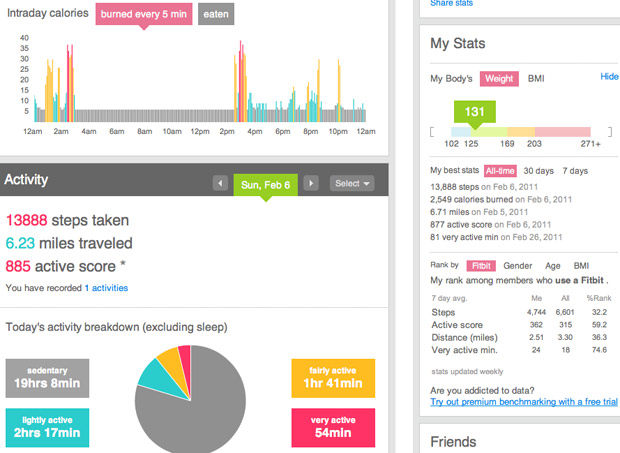 It can do much, much more if you put the effort into it. For example, you can have it track weight, body fat percentage, measurements (neck, bicep, forearm, chest, waist, hips, thigh, calf- geez!), what you've eaten each day, how much water you've had to drink, activities to log, sleep, your mood, allergies from day to day, your daily resting/normal/exertive heart rates, blood pressure and last but not least your blood glucose levels. Phew.

If I had to nitpick one thing though, it's that Fitbit breaks up days strictly by, well, days. I'd rather have my days split up by my sedentary hours (AKA when I sleep). I'll be out past midnight and want to check out my miles for the day to see that it's already reset for the day. I'll often have to manually add my totals for days together to be able to know that I walked 10.51 miles from 9am Saturday to 4am Sunday. That's nice to know!

Unfortunately for the Fitbit folks, I'm the type of user that doesn't want to do extra work. The most I'll do is clip it onto my belt each day and check out how many miles I've gone for the day and just that data keeps me content with the Fitbit. I have logged into the website maybe 5 times in the last two months.

Disclosure: I was provided a Fitbit by one of Fitbit's investors.

Thoughts? Do you own a WakeMate, Fitbit or any of their competitors?