I'm staying with a cousin in New York for a few days and have been able to experience Verizon's FiOS internet service for the first time. FiOS is the first commercial offering of FTTH (Fiber To The Home), although availability is still very limited. Verizon has several different packages ranging from 5mbps down/2mbps up all the way to an incredible 30/15. Compare that to your traditional ~5mbps/384kbps cable line and you'll see why I'm bouncing off the walls here. 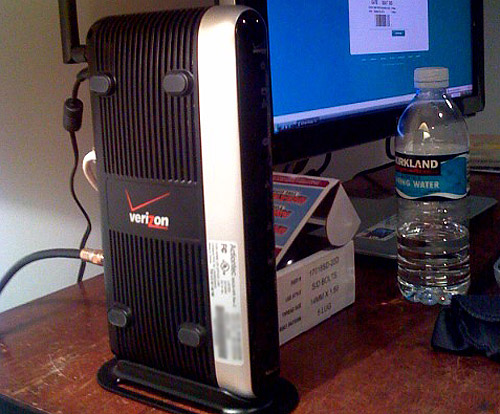 Verizon FiOS modem/router. As for the coax line coming from the back, that is post-ONT.

While cable lines have yet to be used to their full potential, as referenced by this post highlighting developments with DOCSIS 3.0, FiOS's fiber optic line is here and now to the select few. The reason FiOS is only for the select few is that, unlike ubiquitous coaxial cable lines, fiber lines must be manually installed at each residence (not cheap).

The particular package I've been using is rated for 15mbps down/2mbps up. A bandwidth test from speedtest.net backed up these claims, although a few days prior to running bandwidth tests to take screenshots, I had seen speeds of 16 megabits down. I also tested the connection by uploading a 423MB file to my S3 account and it was carried out at a steady 570KB/s to my delight.

On the downside, Verizon's DNS servers are fairly slow. Fortunately, I'm an OpenDNS user so I didn't have to deal with that. CNET gets into details regarding FiOS's slow DNS:

Verizon's Fios network and its DSL (digital subscriber line) service actually had the worst response times of any broadband provider measured. According to VeriTest data, the Verizon Fios service had an average DNS response time of about 180 milliseconds.

For those interested in getting FiOS and lucky enough to have FiOS availability, installation isn't exactly a breeze. In addition to the individual fiber optic line needed in your residence, you'll need to have an optical network terminal (ONT), battery backup, power brick and large modem/router combo installed. Neither of those are small devices. However, for more than triple the speeds you're getting now, I don't think anything as trivial as that would stop you. Don't let those great bandwidth speeds get to your head though, rumor has it that Verizon can block certain (80, 25) ports at their discretion so you can't use all that bandwidth to, say, run a server.

Verdict: When is FiOS coming to my neighborhood?