I know what you're thinking - another lounge chair review? Not too long ago I purchased a Sumo Omni and declared it to be the ultimate blogger's chair for its ability to conform to variety of comfortable computer-friendly positions. Not much has changed with Sumo as I feel the same way about their largest offering, the 6ft by 4ft SumoSac. 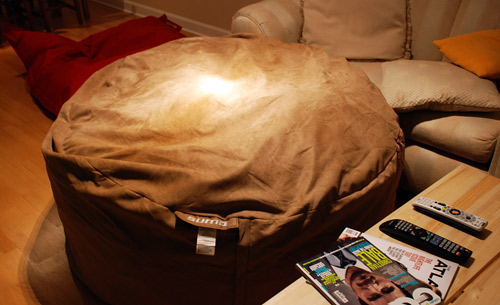 For full disclosure, Sumo contacted me after my Omni review (I purchased that one myself) and asked if I would like to take the SumoSac for a spin. As my living room was still relatively bare, I could not decline the offer. However, before I was even able to get the SumoSac into my apartment I had quite a frustrating shipping experience. Sumo was supposed to have shipped the Sac vacuumed or packed in such a way that I would not see this when going to pick it up: 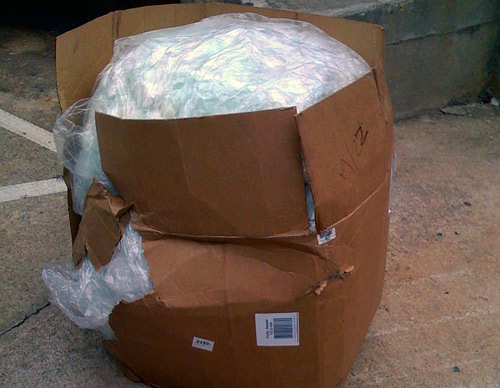 As you can see, they did a poor job packaging the SumoSac and it had expanded and burst the box open during transit. By the time I had transported it to my residence, it had expanded to three times that size and made it unruly enough that I had to use the freight elevator. 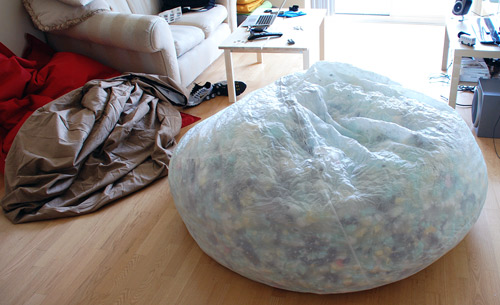 Compared to the Omni, the Sac is easy to work with since you don't need to prop it against anything to create a supportive position. This also means that you will be absorbed inside the Sac and not want to move unless nature calls. 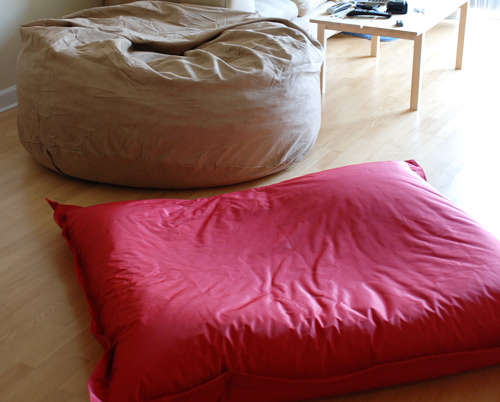 As far as first impressions were concerned, I actually thought it was going to be bigger. While it appears to be not much smaller than my couch, the Sac is still a one person lounger, two max if you're up for cuddling.

Now for the best part of the SumoSac: it is large enough for you to rest your laptop on its own surface and even form a raised area for it. This beats toasting your legs or moving your laptop whenever you get up.

Unlike bean bag chairs and related loungers though, the Sac is filled with "shredded furniture grade urethane foam" so it hopefully won't lose its volume over time. The only downside is that after you sit on it and get up there's an impression left, so if you want to create a different position you'll have to kick it around to reset it back to an unformed shape.

At 399 USD, the largest SumoSac is expensive and definitely more along the lines of a luxury item aimed at the young crowd. I'm not sure how well that works out. Not putting price into consideration, the SumoSac is comfortable enough to have earned a seat in front of my TV. But for that much money they couldn't engineer a way to put a cup holder in it? Tsk tsk. The SumoSac receives 6 out of 10 Stammys.