I'm no stranger to large, fluffy and unusual beanbag-esque furniture. During freshman year of college, some hallmates had a massive Lovesac that one guy actually used as a bed somehow. A few years later I picked up a SumoSac, which I rated at 6 out of 10 Stammys as I questioned the value of a 399 beanbag (the puppy disagreed). But I had to get rid of that when I moved to San Francisco. I think I found a worthy replacement now — the 6 foot Lounger by a company called Comfy Sacks. Essentially, it is identical to the last sacs/loungers I have experienced but comes in at a more reasonable 276. 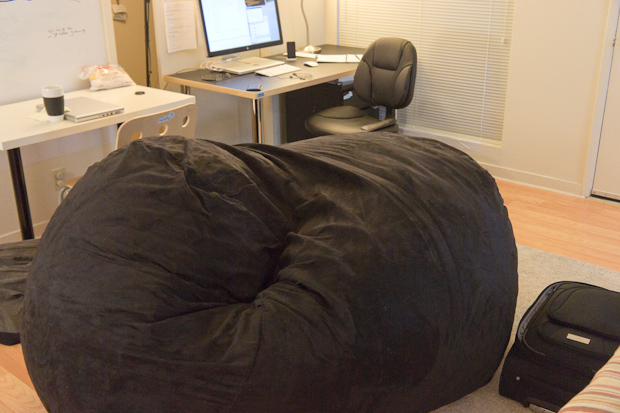 I live in a small studio that doubles as Notifo's San Francisco headquarters. I didn't really have room for a couch that could only serve one purpose and not be readily moved around, so I decided to check out the Comfy Sacks Lounger. One of their main marketing points is that more and more tech companies have their loungers in their headquarters, including Apple, Amazon, Zappos and Zazzle. After living with a lounger around for the last few months, I can say it's a great fit for the hectic startup lifestyle.

My co-founder and I have each taken our fair share of power naps on it while waiting in between early morning conference calls with the East Coast. More frequently it has been used as our discussion chair of sorts. We take turns pacing around, nervously playing out different scenarios or discussing product direction while the other plops on the lounger and ponders these ideas. And of course there are the times when stress and frustation set in and we jump on it to see how high we can launch objects placed on the edge (sorry Android figurine). Ah, good ol' startup life!

Unlike a couch, the lounger can actually be shipped in a medium-sized box. How can they do this? The polyurethane foam pieces used as cushioning are highly compressed. This thing is one solid, heavy block upon arrival. That explains the protective nylon bands ensuring the box stays compressed. The SumoSac I used to own arrived in the same compressed fashion although their box was weaker and it arrived like this. 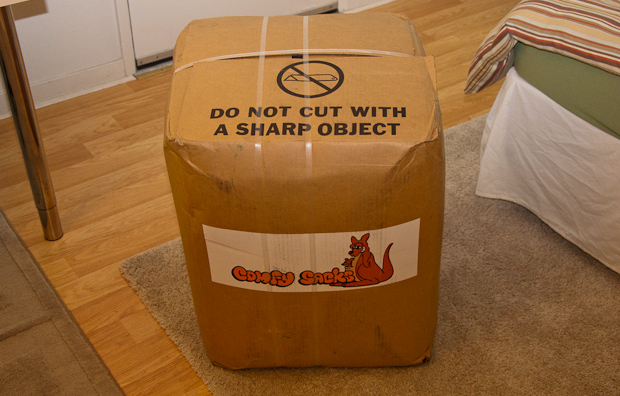 Despite the warning I opened this with my box-cutting weapon of choice — a Smith & Wesson Extreme Ops knife. 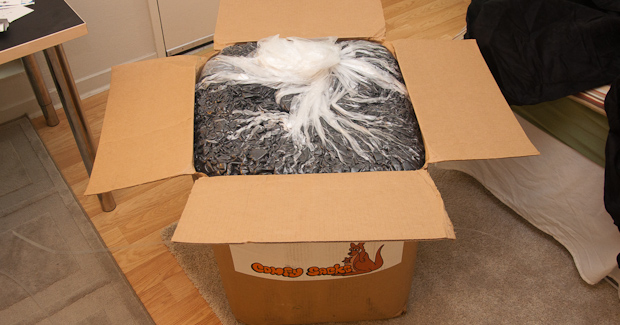 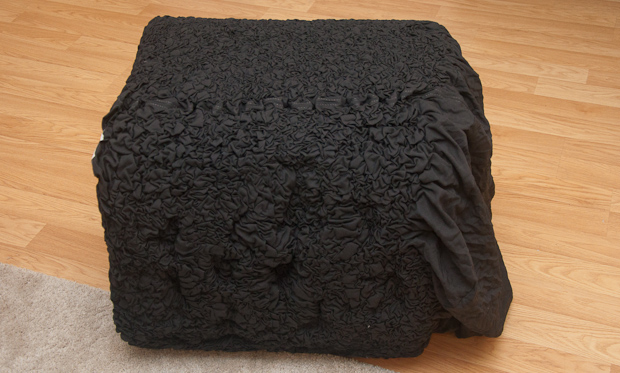 Now that the compressed polyurethane uncomfy block is unleashed, it was time to let it expand. It wasn't going to do it on its own very quickly so I helped it out with 30 minutes of forcing chunks apart, rolling it around and sitting on it a bunch. After that workout, it looked like this: 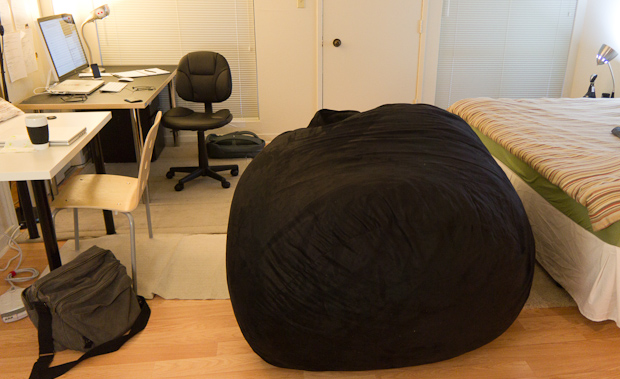 Coming in at 49 pounds, the Comfy Sacks lounger is definitely a behemoth of a beanbag. Once fully expanded and in an uncompressed form it boasts 6 ft x 3.5 ft x 3.5 ft dimensions. I'm not sure if the pictures convey it well enough but it's big and it's not even the largest one (there's a 7.5ft 75lb lounger). There are a few color and fabric options for the cover but I opted for the familiar micro suede. Micro suede is pseudo liquid resistant so you have some time to clean up the spilled beer before it gets absorbed into the fabric. Of course, the cover is also washable but taking it off and putting it back on is the biggest pain in the arse so I avoid it.

In the interest of a fair and balanced review, I must point out that there are many, many competitors in the bean bag/sac/lounger space. I already mentioned a few that I have personally experienced in the beginning of this post. Others that I have not tinkered with include Slacker Sack, Sacks of Love and Ultimate Sack. If you have any experience with these sacks, I'd love to hear your feedback below.

Giant bean bags and loungers are fun to have around and relax on but they are by no means a replacement for the tried and true couch. For example, you can't exactly sit upright on it and eat a meal. It is very difficult to get comfortable on this lounger. You have to roll it around to "reset" the polyurethane shreds and climb on it just right to get in your desired position or you'll end up pushing the foam in the wrong places and you'll have to try again. Pro tip: prop it against a wall and make a sort of triangle seat, then plop down with your laptop. Still a tad cumbersome though.

Sitting down to watch a movie is a 5 minute process, especially with the lounger being heavy and unwieldy. However, when you find that sweet spot it's great! It's large enough for a couple but two friends can't share the lounger without being awkwardly close to each other.

Is this worth 276 USD (including shipping)? For personal use, probably not. For company use for employees/hackers/founders to relax on while their code is compiling? Absolutely! Ask your local startup founder if their HQ has a giant bean bag yet. For the latter use case, the Comfy Sacks Lounger gets 7.5 out of 10 Stammys.

Disclosure: I was provided this lounger for the purpose of this review.

Thoughts? Would you consider something like this or is the price too high for novelty/alternative furniture? Would you like to have one at your workplace? Anything I left out? Feel free to ask below.