Today I will be looking at a set of iPod accessories from the so-called experts in iPod connectivity, the German company Sendstation. They specialize in small and affordable products that are all about convenience and functionality as we will see shortly. There are the PocketDocks, which as the name leads you to believe, are small, portable adapters you can use to connect your iPod to any computer via standard USB and Firewire cables that any geek should have lying around whether at home or work. Then we have my favorite of the bunch, earBuddy. Simply stated, it is a safe home for your treasured iPod earbuds.

There are several flavors of Sendstation's PocketDock. The ones that I have on hand for review are a combo USB and Firewire model, a combo USB and line out model and then a smaller Firewire only model. One thing to note is that while the adapter fits in all 3G and higher iPods, including the iPod Mini, Video and Nano, Firewire can only be used for charging on the newer iPods, such as the Nano. It seems as though Apple has been phasing out Firewire in the recent iPods in favor of a USB interface. 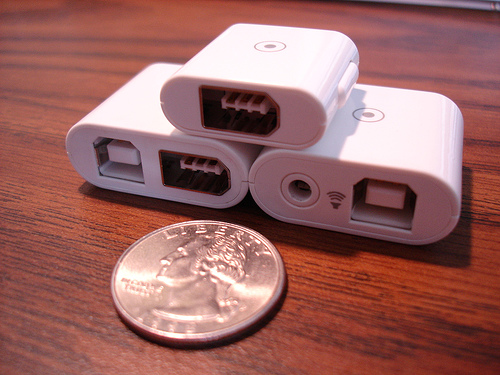 Have you noticed the trend that all my photos take place on the desk? :-P

As the name implies, PocketDocks are small, with the USB and Line Out model coming with its own keychain tote piece. The concept of the PocketDock is rather simple and doesn't take too much thinking to grok. The PocketDock line is made for mobile people; people that might want to sync up their music at work or charge it there, as well as easily connect their iPod to their stereo via line out.

Okay, all that is fine and dandy but how does this help you out? Apple sells their docks at an obscene price, somewhere around 40 for the standard model. This is just not acceptable if you want iPod connectivity at work and at home. All of the PocketDock models much cheaper. The current retail prices are as follows: USB and Line Out - 29.95, FW/USB Combo - 22.95, FW only - 18.95.

The PocketDocks, depending on model, connect to standard 3.5mm audio jacks for line out, standard 6 pin Firewire 400 cables and standard Type B USB cables. Sendstation stuck to standards as you can tell, which is a good thing. It means that if I have a PocketDock handy, I can easily find a USB or Firewire cable wherever I might be. External hard drives and iSights use the Firewire cable you could use and most printers use a Type A to Type B USB cable which is compatible with the PocketDock. Now you can have a massive USB drive (your iPod) with your PocketDock, no need to tote an unsightly cable. 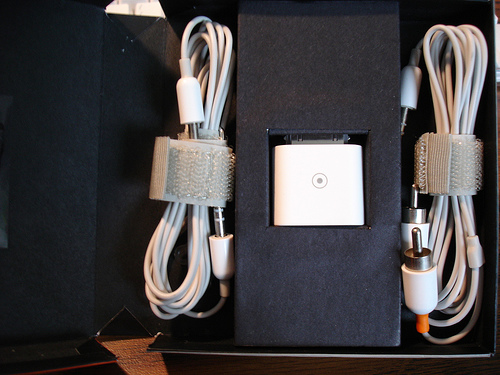 The Combo USB and Line Out model comes with some high quality audio cables, 3.5mm to 3.5mm male for hooking up your iPod to the line in on your computer and a 3.5mm male to RCA jack cable for using with your Hi-Fi audio equipment.

I use my iPod everyday for at least 2 hours - on the way to class, in between classes, on the way back from class, on the campus bus, while eating in the student center; just about everywhere. However, I have this nasty little habit of wrapping the earbuds around my iPod and shoving it away in my coat or messenger bag when I'm not using it. That has the bad outcome of ECTS, or Extreme Cord Tangling Syndrome. The cables easily become frayed and form a tangled cord jungle, requiring at least 45 seconds to untangle. As if this wasn't bad enough, it makes it much easier to loose those comfy black foam earbud coverings. After having gone through multiple iPods and 5 sets of iPod earbuds, I finally found out about earBuddy. 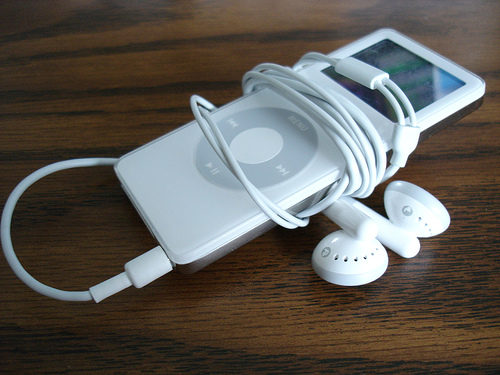 Before earBuddy: Notice early signs of ECTS and loss of black foamy things. 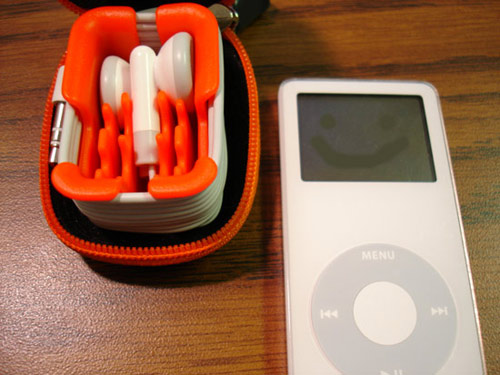 There's not much else to say about the earBuddy. It promises to do one thing, and it does it well. The outside of the case is made of very taught ballistic nylon, while the interior sports an sturdy ABS plastic reel for your earbuds. According the the earBuddy page, the earBuddy can withstand up to 200 pounds of force. I would actually believe that. I do not condone this, but I jumped on it several times, earbuds inside, with no outcome. If I learned anything from taking Physics twice, it's that jumping on something will result in more force than your body weight due to gravity, so I easily asserted over 200 pounds of force (technically it's not force but I don't want to get into that). I was impressed with the both the build quality and the integrity of the materials used, all at a reasonable price of 14.95. The earBuddy also comes in an all black version, if that's your thing. 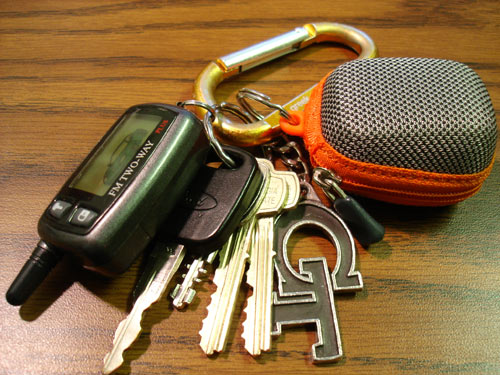 The earBuddy is small enough to earn a spot on your keychain or attached to your backpack zipper. It's also a great geek conversation piece, if you want to attract that type of crowd. I'm a little biased though, I go to a school where people regularly wear USB drive lanyards and wear Bluetooth cell phone headsets during class.