Remember when Apple first unleashed the MacBook Pros, the first Intel Macs, back in January of 2006? I do, and the one feature of the new MBPs that made me go "aww, that's cool" had to be the MagSafe system. No more tripping on cords and dragging your gear down with you. MagSafe easily detached in such cases. Until now, we have yet to see any other hardware tote such a safety feature. 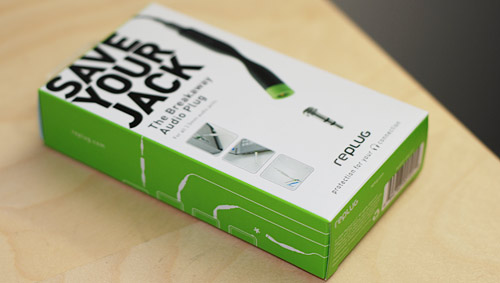 Enter replug. While it may not use suave magnets to get the job done, replug serves the same purpose but for your headphone jack, or any 3.5mm minijack for that matter. Replug is a simple adapter you put in between your computer or other audio device and headphones. Everything else stays the same. It's just that when you, your friends or your labradoodle get caught up in your cabling, your jack will survive. Well, that's the idea anyway.

I love everything about the replug - the simple concept, great execution, marketing and design. I would have liked for the actual adapter to be a little bit smaller but I also think my iPhone is too thick.

Now for the my issue with the replug. The problem lies with way the two parts of the replug connect. Instead of a magnet, which I understand would have been remarkably difficult to incorporate in such a small package, the replug uses firm silicone to keep the jack in place and connected to the contacts. I found the silicone to be hard enough that yanking on the cord to release the plug involved more effort than I would have liked, especially compared to a MagSafe connector. Once the jack was disconnected from the replug, I had the task of reattaching it. It proved to be quite a challenge. Forcing a little piece of metal into a firm silicone fitting took quite a few tries and wore out my fingers quickly.

However, I imagine that over time the green silicone holding the jack to the replug will become slightly softer and fix these issues. For a retail price of 18, I would be willing to take a chance on the replug. Regardless of how hard it may be to disconnect the replug, it honestly can't be harder than your laptop taking the full blow of someone tripping over your cable. My first iPod, a second generation 10GB iPod, met its untimely death when it fell jack-first onto concrete and cracked the circuit board. Replug probably could have helped. 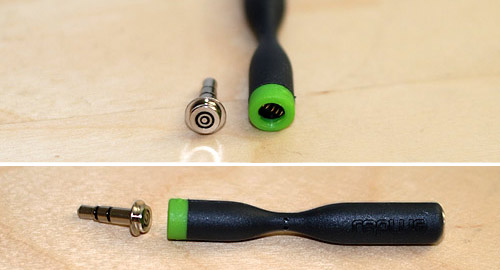 Replug availability is marked as November 1st but I can't seem to find any retailers selling it yet. It also comes in white for all you Apple fanatics. As for feedback, I'd love to see a smaller version that can fit into the iPhone's recessed audio jack.

Would you use such a device? At 18, it's a pretty cheap insurance plan.