I've had my MacBook Air for 15 days now. It has been serving as my primary computer and I have used it to do everything I usually do with my MacBook Pro. I'll cover how it has stacked up to the MBP in this review in addition to how the MacBook Air's smaller size has changed the way I do things. 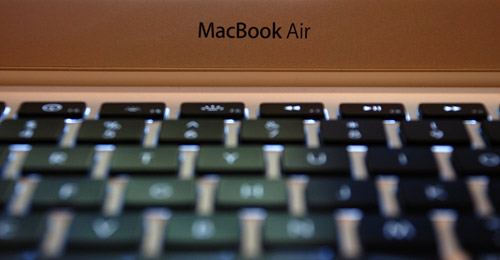 As a reminder, I picked up the lower model MacBook Air with the 1.6GHz dual-core processor and the 80GB 1.8-inch 4200RPM hard drive. The MacBook Air has finally allowed me to use it how laptops should be used - on the go. Several years ago I had a similarly small Dell Inspiron 300M 3 pound notebook. It didn't have an optical drive either and I took it everywhere. I didn't have to think about it whether I really wanted to lug it with me to class. It was so small and light that bringing it everywhere wasn't even something to think about. I'm finally back to that with the MacBook Air.

The Air is great for traveling. Look at the size of the charger compared to other MacBooks. From left to right: MacBook Air, MacBook, MacBook Pro (new), MacBook Pro (old).

I've begun leaving my school notebooks at home and started taking notes solely on the Air. Some classrooms have "half" desks with a limited workspace area where a paper notebook only barely fits. The Air feels right at home on that platform. So what else does the Air make easier? As I just learned over my spring break, it makes traveling a bit easier. Where better to take the Air than an airport?

Charging the Air at the busiest airport in the U.S. - Hartsfield-Jackson Atlanta Airport. 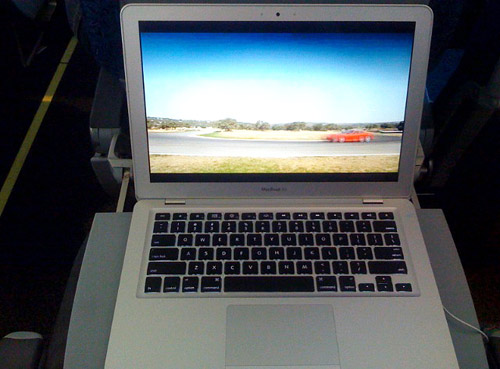 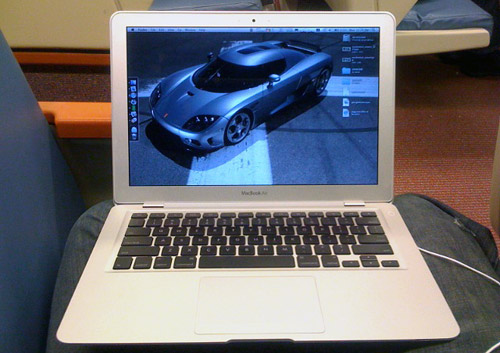 Or a wi-fi hangout 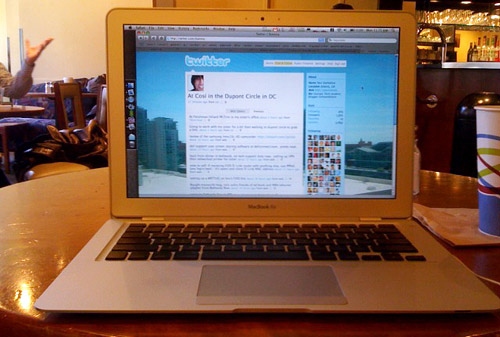 Dealing with the "limitations"

From my last post I received numerous questions about how I will cope with the obvious limitations of the MacBook Air: no optical drive, no ethernet, slower processor, slower hard drive, a single USB port and 2GB of RAM. As for the optical drive, I seriously never used it before so why would I suddenly feel limited by not having it now? If I absolutely need to use an optical drive there is Apple's Remote Disc that I can use to borrow another computer's optical drive or I could just get the superdrive add-on. But for most of the cases where people would need an optical drive, I just connect to my NAS server (Part 1, Part 2, Part 3), where I have my data - backups of application installers, movies and the like.

As for transferring massive amounts of data over Wi-Fi, well that is sucky so I had no problem dropping 30 for the USB Ethernet adapter.

Apple USB Ethernet dongle in front of a Cisco switch.

Unfortunately, going through USB it tends to use a bit of CPU power to process network traffic. For example, when transferring a file from my NAS over ethernet to the Air, CPU usage noticeably increases as seen in the Menu Meters graph. This is probably because the USB Ethernet adapter might not have a dedicated chip and most of the work gets done with software.

In regards to speed, it's not that slow. I have been able to do everything in my daily work on the Air. This includes using multiple spaces, constantly streaming iTunes radio music, using many tabs in Safari, casual Photoshop use, taking notes and recording lectures in Word 2008, watching episodes of Top Gear and doing web development with Firefox.

The hard drive isn't particularly rapid. It's a tiny 1.8-inch 4200RPM disk - the same size used in iPods. I'm just not too sure I trust my data on such a small drive, prone to failing. I remember when I had my 2nd generation 5GB iPod and Apple warned people against running an OS off of the hard drive as it would be too stressful on the 1.8-inch drive... and now Apple put that same drive in a laptop. Granted they probably did a lot of testing but it still makes me have second thoughts.

Regardless, that's just more incentive to backup regularly. After initial bootup, the MacBook Air doesn't feel slow. Applications take a bit longer to load but after that there is no real speed issue. From a fresh boot, Photoshop CS3 takes 20 seconds to load completely.

Having "only" 2GB of RAM hasn't been much of an issue either. On average with having Safari, iTunes, Mail and Photoshop open, I consume around a gig of RAM. After having the Air running for a few days and opening/closing various apps, the amount of free RAM is closer to 500 megs - still adequate. Whereas I used to always consume 3GB of RAM in my MacBook Pro, I'm just a bit more careful about not having 10 or more applications open simultaneously. It hasn't negatively affected my workflow though.

As for having one USB port, that's not an issue on the go. I don't need to plug anything in other than a pair of headphones. While I'm at my desk I'm usually connected to my external monitor and I utilize it's built-in USB hub.

In addition to the fancy trackpad featuring iPhone-like gestures (my favorite is the three finger slide to go forward or backward in Safari), the Air has another neat feature: A2DP Bluetooth (stereo). This means you can get a fancy pair of stereo bluetooth headphones and use them completely without wires.

And while not exactly a feature I thought I'd point out that the Air has a single speaker, unlike other MacBooks. It's located under the right side of the keyboard and is decently loud at best.

Like older PowerBooks, the keyboard on the Air ever so slightly comes in contact with the screen. At certain angles you can see imprints of the keys on the screen. It's not much of an issue, just a slight annoyance. Similarly, the trackpad button touches against the top of the screen when closed, leaving scratch/rub marks against both the screen bezel and the trackpad.

Those are the only aesthetic issues. Other than that the Air has absolutely magnificent build quality. The case is strong and sturdy. If you thought the MacBook Pro was pretty solid, you need to try out an Air.

The biggest problem with the Air that I have noticed as well as many other users on the MacRumors forums is core shutdown. As a safety feature, when the MacBook Air gets too hot one of the two cores will shutdown. On paper, this sounds good. I wouldn't mind sacrificing performance to save my laptop if it was for some reason extremely hot and on the verge of killing itself. My car has a similar feature where it will shutdown 4 of the 8 cylinders if it overheats. Fortunately I've never experienced that in my car.. but I have with the Air. The crazy thing is, my Air has never been "extremely" hot and usually remains within the 60-70 degrees Celsius range with load.

Many users report this issue when watching video. A core will shutdown and then frames will start dropping from the loss of performance. I have had one of the cores shutdown a handful of times in the last two weeks. It has happened more often when my external monitor was connected and that seems logical as the X3100 Intel graphics chip gets put under more stress and gets hotter. While the processor might be in an okay temperature range, the overall system isn't, thus causing a core shutdown. For example, while watching a non-HD TV show on the external monitor, a core shutdown 30 minutes into the episode. Fortunately, when using just the Air's screen, this does not come up much at all. I watched several shows back to back in fullscreen on a flight with the Air and suffered no such problems.

Another issue of core shutdown seems to be a software driver issue where the kernel_task process will begin using close to 70% of the CPU and cause a core to shutdown. Again this seems to occur more often when an external monitor is in use. During these core shutdown issues, the internal fan is set to the max (6200RPM) and the issues still occur.

That being said, it is not really possible to play HD content on the Air reliably to an external screen. Specifically, I have only tested playing to an external display set to 1920x1200 resolution. However, on the Air's internal screen, 720p content will play fine and use 50-70% of the CPU. Larger 1080p video will play but tends to drop frames quite regularly.

All of the ports are on the slanted bottom of the Air, making it hard to connect things without tilting the Air and seeing what you're plugging into. Also, I haven't run into this problem myself but I can imagine that chunky USB memory sticks won't fit into the USB port - there isn't much clearance.

Also, the Air tends to wobble if it's not on a 100% sturdy surface. Some Airs don't have this issue but many people have reported it.

The iSight in the Air doesn't seem to have the same quality as other MacBooks. Pictures seem a bit "fuzzy" and soft and seem to lack detail at times. Perhaps it is a consequence of a thinner sensor or lens setup used in the Air.

None at all. The Air has enough power to do my work tasks and small enough to bring everywhere. Down the line I can see myself eying Mtron's 128GB 1.8-inch SSD capable of 100MB+/sec read/write throughput. Hopefully it comes in a PATA/ZIF flavor as the Air does not use SATA at the moment. Subtle rumors indicate a move to a 45nm chip and a SATA drive in the summer, but we'll have to wait and see.

If I had to pick out one thing about the Air and call it my favorite, it would be the sturdy construction. This thing is solid and feels like it was carved from a block of aluminum. Despite the bugs and issues, the Air gets a 9/10.

Thoughts? Is the Air for you? If you read all the way to here, leave a comment and claim your Stammy points.