I was recently in the market for an affordable, HD-capable pocket video camera. I knew Pure Digital's Flip line of pocket camcorders like the Mino HD and Ultra HD were very popular in this space and as such I was just about ready to buy one. However, I decided to look around first and that's when I discovered the 180 Kodak Zi8 HD pocket video camera. After having the Zi8 on hand for a few weeks, I believe it to be the best high-definition pocket video camera near the ~200 price point on the market now. I'll attempt to explain why in this review but if you're looking for a quick answer, it's because the Zi8 has an external microphone input, SDHC support and some interesting things I'll get into soon. 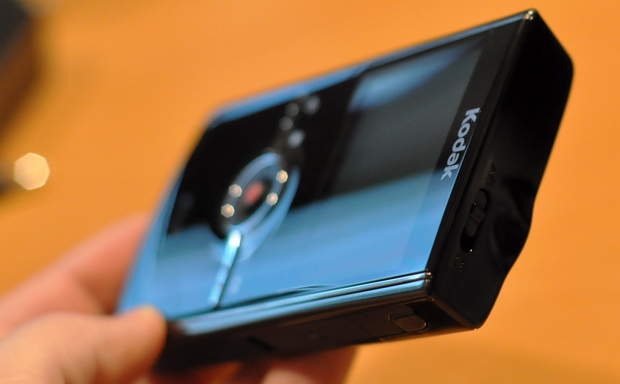 While the 180 Kodak Zi8 is cheaper than Flip's 2nd Generation offerings (230 MSRP for the 8GB Mino HD), the Zi8 requires that you provide your own an SDHC memory card. That is of course unless you think the measely 20MB of onboard storage is enough for your HD clips, which are typically 100 MB per 2ish minutes of video at the lowest HD setting (720p @ 30fps). Fair enough; SDHC storage is cheap and now with Class 10 cards, very fast. I purchased a 32GB Class 10 SDHC card (Patriot LX) to go with my Zi8 for about 100. 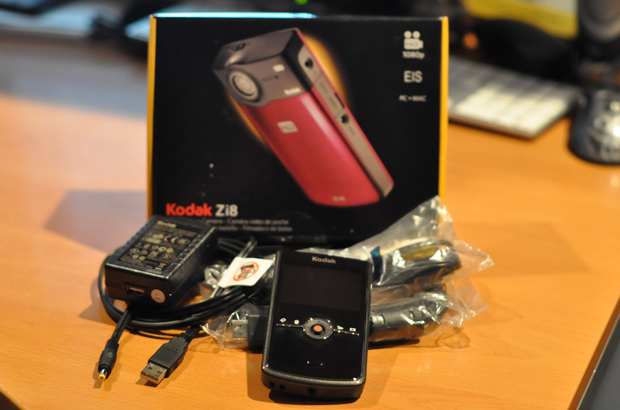 The unboxed Zi8 with the usual assortment of cables (A/V, HDMI, power).

On the upside the Zi8 unboxing yields more goodies than with the Flip cameras. You get a wall outlet charger, which would cost you some 20 with the Flip, as well as A/V and HDMI cables to connect the Zi8 to a TV for displaying your latest clips.

Getting to Know the Kodak Zi8

At 4.5-inches tall, 0.9-inches thick and 2.4-inches wide, the Zi8's form factor is not unlike that of any other smartphone that might occupy your pocket on a daily basis. Also similar to a smartphone, you can charge the Zi8 over USB, a process that will take around 4 hours for a full charge or use the included wall charger to charge the Zi8 in just 2 hours. 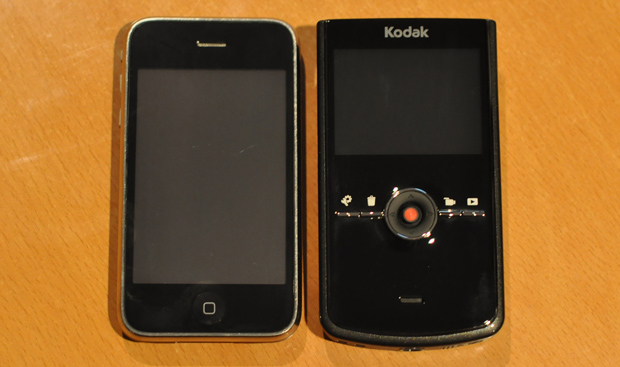 You can't tell in this picture but the Zi8 is substantially thicker than the iPhone 3GS.

The Zi8 sports a vibrant 2.5-inch LCD display boasting 230,000 pixels that rivals the 2-inch displays found on Flip's current products. Unfortunately, it is not possible to turn off the display to save battery while recording. That being said, I got just 1 hour and 37 minutes of battery life when recording 720p @ 60fps. Kodak states an official battery life of 90 minutes when recording 720p @ 30fps, so my numbers seem accurate. However, shooting with EIS video stabilization enabled (pretty much all the time unless you're using a tripod) battery life will look more like 75 minutes.

There are two solutions for those that require more battery life while on the go: 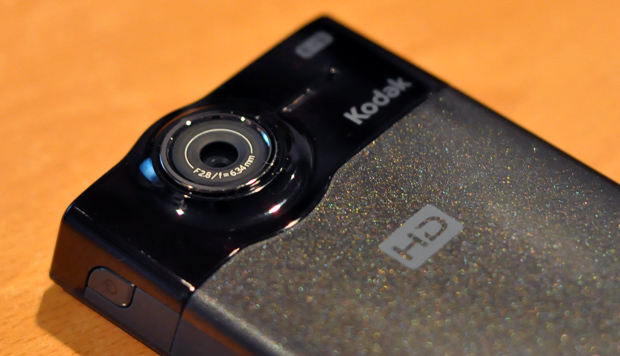 Like many other pocket video cameras at this price point, the Zi8 uses a small fixed focus lens rated at f/2.8 (compare to the better f/2.4 for the Flip cams). Fixed focus is good for these types of pocket cameras as it is fast and doesn't have to spend time focusing on the subject you want it to focus on, arguably at the expense of some quality in different conditions. Unfortunately the way it is setup, it's already "zoomed in" a bit from the start - 46mm for 720p videos and 61mm for 1080p videos. It just means you will have to be a bit further back from your subject(s). Flip video cameras have a similar issue which is why both the Zi8 and Flip cameras have an active community of people that modify their camera with external lenses. I plan on purchasing a 0.67X wide angle+macro, 2X telescopic and a fisheye lens to attach to the exterior of my Zi8.

On top of the Zi8 (visible in the very first picture in this post) there is a focus switch that lets you go between regular landscape mode and macro mode. Macro mode is a huge plus for me as I often record close-ups of gadgets and electronics at just a few inches away. The only downside being that it takes some effort to switch between the two and a mechanical clicking sound will end up in your video; less so if you are using an external microphone.

There is no optical zoom with the Zi8 but the 4X digital zoom works sufficiently but anything past 2X zoom and the video quality drops significantly. The zoom is twitchy and not smooth so if you're trying to make a pleasant video you'll want to zoom in first then begin recording. The Flip cameras only have 2X digital zoom, so the Zi8 gets some more points. Regardless, it's best just avoid all digital zoom in any way, shape or form. Everytime you use digital zoom, a photographer somewhere in the world starts crying. 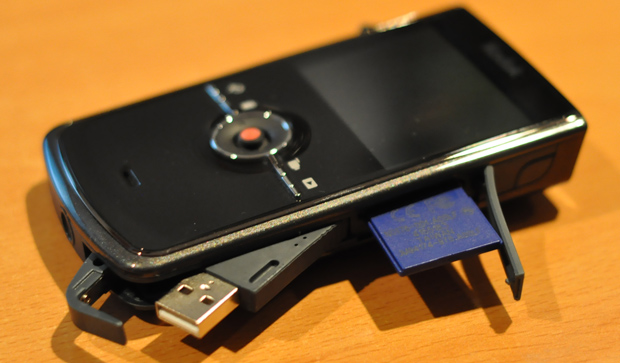 While I'm on the subject of battery life, it should be noted that a 32GB SDHC card will give you just over 5 hours of recording time with 720p @ 30 fps. I don't know where Kodak came up with their "record up to 10 hours of HD video" statement, as 32GB is the largest SDHC card supported by the Zi8.

Now onto the subject of the Zi8's Electronic Image Stabilization. EIS on the Zi8 is purely digital and not to be confused with optical image stabilization found on some more expensive cameras (for example Nikon VR or Canon IS). Kodak is the first player in the affordable pocket video recorder industry to release a camera with any type of image stabilization. This is a big deal for a camera that is likely going to be handheld (YouTubers) and not used with a tripod. Unfortunately, their Zi8 EIS doesn't get stellar marks from me. First off, it should be noted that digital image stabilization just can't turn a shaky handy while walking into a perfectly steady shot. That's not the job of EIS. Instead it is supposed to turn a reasonably steady handheld clip into something with less perceived shakes. In my testing, EIS does not help much regardless of shooting style. Of course, that's better than nothing. Kodak gets an E for Effort on this one. 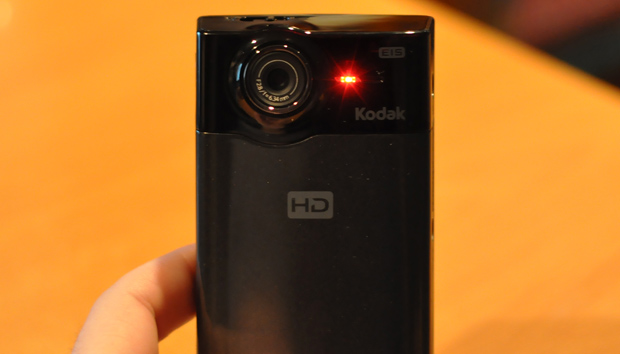 Unlike the Flip, you can't turn off the Zi8's recording LED... no sneaky recording for you (pssst - try a small strip of black electrical tape)

The Zi8 also comes with face detection that shows little brackets around each face it recognizes while recording. Then it adjusts settings (not focus as the lens is fixed focus) to ensure the face is sufficiently illuminated.

The Zi8's built-in mono microphone is adequate for picking up peoples' voices from just a few feet away but any further than that and it struggles. This wouldn't be an issue if it was possible to easily adjust microphone gain on the fly and see an on-screen measurement like in the settings. Fortunately, the Zi8 comes equipped with an external microphone input — great for people demanding a bit more in the audio department.

I tested the external audio input with a ~50 Sony ECM-DS70P stereo mic and was quite pleased with the overall result. However, I found I had to lower the mic gain, then increase the volume in post-production to produce a less noisy final product. I would have to test with other microphones to be sure but it seems like the Zi8 has a noisy external microphone input as increasing the gain substantially increased the noise, where as this microphone is usually quiet.

I'll be the first to say the user interface is not quite the best but it is far from being difficult to use. There's a single settings menu with just a handful of things you can change, so it's not like you can get lost in menus. The trouble comes more from the button feel. There are four buttons for settings, deleting videos, switching to recording mode or playback mode, in addition to a joystick that controls things like playback, recording, zoom and volume. The joystick was the first thing to annoy me on the Zi8. It's not easy to control and you end up selecting menu items you didn't mean to. Likewise, those four buttons could stand to be larger and easier to press. 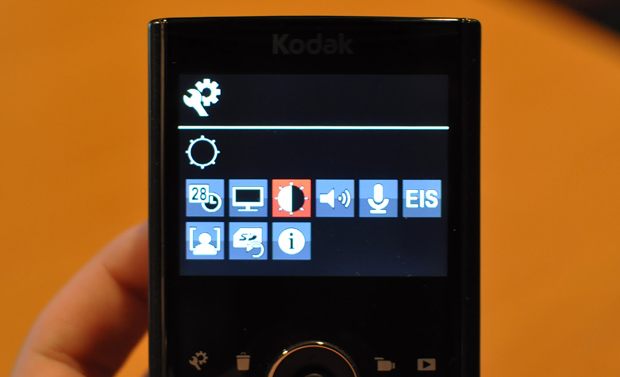 While the Zi8 can take 5.3 megapixel photos, something that its competitors don't, it takes generally washed out, blurry photos that barely rival the camera on the iPhone. 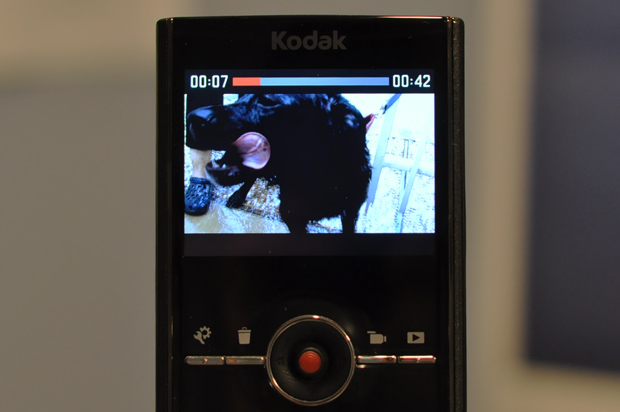 Connecting the Zi8 to your computer can either be done by popping out the flexible USB attachment or taking out the SDHC card and putting it in a card reader. I prefer using my SDHC card reader as the Zi8's internal USB connector is too short and bulky to fit next to or in between my used USB ports. I imagine traveling with the Zi8 itself without any cables or card readers will make me realize the handiness of the internal USB connector.

There are three HD recording modes with the Zi8: 1080p @ 30 fps, 720p @ 60 fps and 720p @ 30 fps. I found that recording at 30 fps 720p made the most sense as all of my content would end up on YouTube where it would get converted to 30 fps anyway, so I could save on storage space by recording in 30 fps. As for why I don't bother with 1080p on the Zi8, it's same argument — most of my stuff ends up on the web so shooting in 1080p is overkill and leads to longer iMovie / Final Cut importing and exporting times. It also seems that several of my clips recorded at 1080p have less smooth playback (even on my Core i7 HTPC) leading me to believe the frame rate was closer to ~20-25 fps than the stated 30. Also, recording at 1080p is like recording at the 35mm equivalent focal length of 61mm so you'll have to stand back further than you would normally. 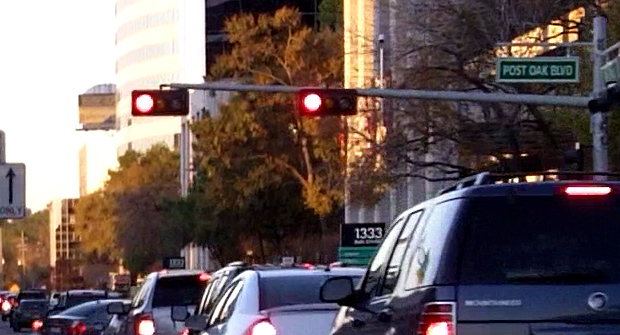 Now for the big question, do the videos look good? Yes. The Zi8 does not like low light situations and produces considerable grain in those conditions, but everywhere else I was pleased with the video quality. However, there's one slightly annoying issue I noticed: the Zi8 takes its sweet little time adjusting to extreme changes in lighting conditions. For example, moving from indoors to sunny outdoors or vice versa will overwhelm the Zi8 and it will take a few seconds for automatic white balance, exposure and ISO to fully adjust to the new lighting conditions.

I pointed out some of those situations with this footage video below.

Files saved by the Zi8 utilize H.264 encoding and are .MOVs. 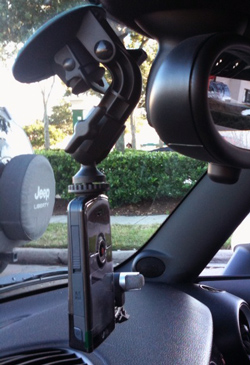 I purchased the Zi8 with the intent of primarily recording driving and occasionally autocross and track day videos. I ended up going with a strong and cheap (14 when I bought it) suction cup mount to test out. I ended up being very pleased with this setup. The Zi8 also supports an IR remote control sold separately by Kodak so if I feel the need to mount the camera to the back window/seats I can remotely trigger recording with that control, which appears to be sold out everywhere and/or discontinued.

The microphone used is the ECM-DS70P I mentioned earlier and I am quite happy with it aside from that Zi8 mic gain issue. 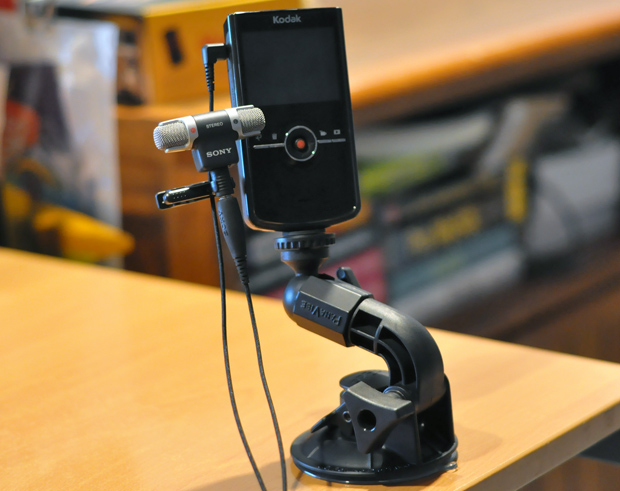 Overall the 180 USD Kodak Zi8 is a fantastic pocket video camera for the price. Low light performance has always been a challenge for these types of cameras and the Zi8 is no exception; expect some grain in less than optimal lighting conditions. In the end, the Zi8 is a winner due to its superior expansion features like removable SDHC flash storage and support for external microphones, as well as 1080p and 720p @ 60 fps recording modes.

Thoughts? What do you currently use for your portable video recording needs?