I've never been a fan of bluetooth earpieces. I always thought it was kind of weird to see people walking along and seemingly talking to themselves, or emitting a bright blue pulse from a LED on their earpiece. After hearing about the Aliph Jawbone 2 bluetooth earpiece all too much, I decided to see what all the fuss was about. If you live in California, chances are you will need to pick up a hands-free earpiece sooner or later to comply with the newest driving regulation so keep reading.

First off, why is the Jawbone so popular anyway and why isn't this the first time you've heard of it? Aliph's original Jawbone was marketed as a stylish earpiece with remarkable call quality due to signal processing developed for DARPA that reduced background noise.

It's called the Jawbone because each earpiece has a "Voice Activity Sensor" that rests on your cheek and detects if you are talking so it can filter out background noise accordingly. Now with the Jawbone 2, Aliph has taken two years of customer feedback and improved call quality and made it half the size. As you might imagine, the Jawbone 2 is at the high-end of the cell phone accessories scale and retails for 129 USD.

There's not much in the Jawbone 2 box other than a charger, the earpiece itself and a few earbuds and loops to accommodate different users. The packaging is almost like the new iPods in their small plastic cases. After taking the earpiece out, Aliph recommends charging it for 50 minutes. The charger is travel-sized and the cable can be disconnected and plugged into a USB port for an alternative method of charging. The end of the cable that attaches to the Jawbone 2 is magnetic a la MagSafe so there's no fidgeting with a latch as is often the case with other bluetooth earpieces.

Getting the Jawbone 2 to fit properly on my ear was a bit challenging. I tried various earbuds and flexed the earhook several times to get it to stay put but it never felt comfortable. I would prefer some sort of in-ear earbud attachment, although I have a feeling that Aliph designed the Jawbone like this so that some external sounds are audible for safety purposes. It would be better if the earhooks provided were more flexible. They are the type that require a lot of force and even still tend to go back to their original shape. 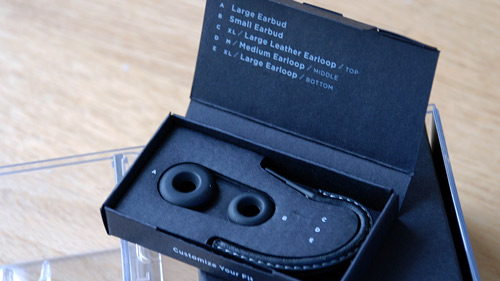 If the earbud alone fits you perfectly you can take off the earhook altogether and just wear the Jawbone 2 by itself.

Setting up the Jawbone 2 with my iPhone 3G was a trival process that involved turning on bluetooth, holding down the two buttons on the Jawbone 2 to enable discoverable mode and pairing it with the iPhone. The iPhone recognized it and when making calls gives the option of what audio source/output to use.

There are two concealed buttons on the Jawbone 2. One takes care of basic necessities like picking up calls and hanging up on calls as well as turning the Jawbone on and off while the other controls volume and "Noise Assassin." However, each button is multi-function and gives the user considerable control with minimal interaction - ideally. For me pushing the buttons on the earpiece often moved the earpiece, making me waste time putting it back in that perfect spot.

For example, tapping the rear button three times redials the last call while tapping it during a call will go through volume presets on your phone (unfortunately there is no direct control over volume on the Jawbone).

When it comes to call quality, the Jawbone 2 is no slouch. On my end I could hear people clearly with little static. Volume is adequate but it begins to crackle on the highest setting. On the other end of the call, people told me they could hear me well (good for my echo-y wood floored apartment) but they often asked if I was on speaker phone - 8 out of 13 people to be exact. I found myself speaking up and repeating myself occasionally but this seems to be a trend across most earpieces. Interpret that however you like.

For using the Jawbone 2 for a week, I only had one situation where the Jawbone 2 got disconnected from the iPhone for whatever reason while a call was still active.

I was able to safely wander 15 feet away from my phone with the Jawbone 2 before static was introduced. At about 30 feet the Jawbone 2 lost a connection with the phone. That seems to be right on par for bluetooth and is more than adequate for normal use.

I wouldn't say the Jawbone 2 has changed my life but it is by and far a capable bluetooth earpiece. I keep it in my car now for picking up calls when driving but other than that I still use my phone normally. I don't enjoy spending a minute or two each time I put on the earpiece to get it to fit properly. It never really felt at home in my ear. The Aliph Jawbone 2 receives 7.5 out of 10 Stammys. It would receive a 9 out of 10 with easier to use buttons and a more comfortable fit.

Do you use a bluetooth headset with your mobile phone?