Anyone working in the tech industry or simply involved with technology is likely to spend more hours in front of a computer than is healthy for them. This is where the importance of a quality chair comes into play. Living in dorms for my first 2 years in college, I have finally come to appreciate using a regular chair now that I have my own place.

I remember those late nights working on school projects where I would quite literally be hunched over my desk in an uncomfortable wooden chair for more than 10 hours at a time.

I recently began looking into professional quality chairs for the business environment and couldn't ignore the offerings from Herman Miller. (FYI, Herman Miller has a close competitor, Steelcase.) I've had several encounters with high-end Herman Miller chairs, but I really began to take notice when my hotel room in Sunnyvale, CA last summer had a Herman Miller Aeron.

The Aeron is by far Herman Miller's best known chair as it has been out for over a decade. As such, I decided to take a look at the more recent Celle chair, released in 2005.

The Celle chair gets its name from the cellular suspension, made up of cells and loops, that makes up the bulk of the chair and provides ergonomic, responsive support regardless of your body type. Unlike padded chairs, the Celle's unique cellular suspension allows individual cells to flex as necessary, conforming to your shape, weight and movement. While the entire chair back is made of this cellular suspension, different parts of it allow for varying amounts of flex.

While it may look like hard plastic, it is actually quite flexible.

The Celle chair can be configured with different types of upholstery or left with the cellular suspension backing, which lets air flow through easier.

The Celle excels when it comes to adjustability. If you don't like something about the chair's setup, you can change it. You can adjust seat height, seat depth, lumbar height, lumbar depth, forward tilt, tilt tension, tilt limiting, arm angle, arm height and arm width. 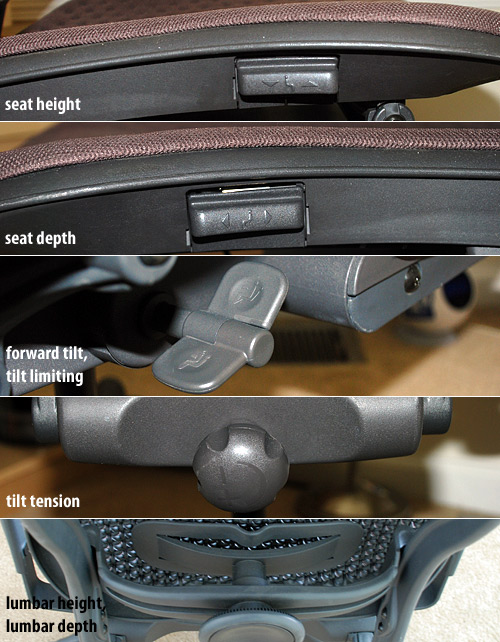 I have never owned a chair that let me alter seat depth and I thoroughly enjoy the Celle for that feature alone.

After using the Celle for about a week, I have become aware of its sturdy construction especially coming from using dorm chairs for years. While most of the chair is some form of plastic, there is a strong underlying metal framework.

My first impression of the chair was that it was hard (the actual seat). It's now a week later and I have realized a few things. First off, this is a high-end, professional business chair. It's not exactly marketed towards college kids lounging to watch movies on their computer. As such, the firmer feel goes in hand with the work-oriented demographic. To back that claim up, this article mentions how the left brain is associated with learning and is stimulated while you sit upright on a firm surface.

The seat bottom is large enough for me to sit Indian style. The seat depth/height can be adjusted enough to accommodate 95 percent of North American people according to Herman Miller. 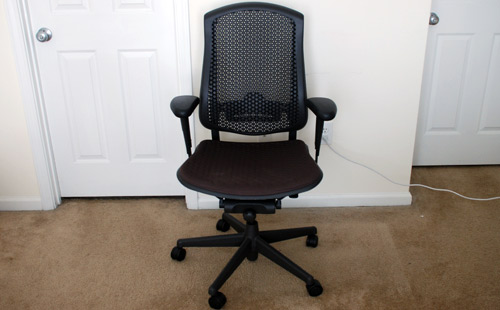 I was concerned with the height of the arm rests as if they were too tall, I wouldn't be able to bring the chair close to my relatively low desk. Fortunately, the arm rests are also easily adjusted.

If you're not used to these types of work chairs, it will definitely be a different experience. I have grown to favor the Celle over overly-padded, support-lacking chairs.

The 450 - 630 (depending on options) Herman Miller Celle chair is a high-quality chair ideal for the new age of startups, freelance developers and telecommuters that work from home and practically live in front of their computer. The Celle naturally adapts to your sitting style and body type with a unique cellular suspension while allowing for seemingly endless adjustability. However, some people might not be used to the firmer feel with this work-oriented chair.

The only complaint I have about the Celle is that it is not possible to lock it in a reclined position. While I don't blame them as it's not exactly a great posture position, I sometimes recline and type with my keyboard in my lap. However, the tilt tension can be set low enough to where this is almost not an issue for me.

Would I recommend this chair? If you've got the money and spend 8 hours per day or more in front of your computer, I would thoroughly consider trying the Celle. Another aspect to the Celle is that it's a Herman Miller. Herman Millers are the BMW of chairs and carry pretty high street cred among the geekier crowds. You can be proud to sit in one of these. Speaking of which, what desk chair do you use?