Bloggers, techies, professional journalists and college students all seem to share one thing in common. They love staying in-the-know. Roommates talking about the new Nintendo Wii? No problem, RSS aggregators can help you out by allowing you to subscribe to many video game sites, per this scenario, and get informed so you won't have to ride in the back seat. There are many RSS readers or aggregators out there, but which one do I use you ask? I use FeedLounge, a project started by contributing WordPress developer Alex King.

FeedLounge is not an application; it's an online web service which you subscribe to. Since it is online, I can have access to my feeds from any computer, whether it be in my room on my desktop computer, my laptop while lounging in the student center or the library computers. I know what you're saying. Bloglines, NewsGator, NewsAlloy, Rojo and other services offer the same thing for free. Not quite. FeedLounge provides each user with a great and productive experience in many ways.

After trying the demo a few months ago, I was instantly attracted to the slick, AJAX-ified interface. No need to refresh the page to see new items, they just appear. FeedLounge keeps track of your history, so if you know you read something interesting yesterday but forgot what it was, you can quickly click the history icon to find that particular post. FeedLounge was built upon the principle that its users will be tracking many feeds at the same time, therefore it must be easy for them to find what they need. Users can also sort posts by tags, which can easily be added manually to each post. When you subscribe to feeds, you are given the option of tagging them, which groups feeds with the same tags. You can also change the color of each tag which is rather helpful for people tracking over a hundred feeds split into many tags.

Despite using AJAX, which has gained a bad reputation among slow interfaces such as Yahoo Mail Beta, FeedLounge is rather snappy. The first time you load it on a computer it will take a few seconds to download and cache the necessary files, but after that it is immensely responsive. On my internet connection, clicking a feed displays a list of posts in under a second and clicking a post to display the article is equally impressive. However, your experience may vary.

To accomodate for everyone's viewing preferences and varying display resolutions, FeedLounge comes equipped with three viewing modes that are accessible with layout icons along the top of the page. In addition, users can manually adjust the width and height of each portion of the page, similar to a real application like NetNewsWire. Each layout is equally intuitive and productive. Users can see everything in one screen. 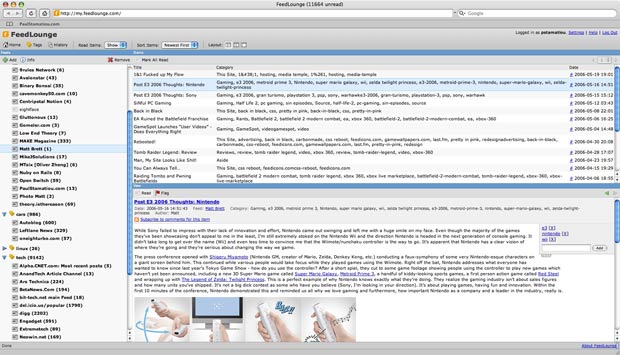 Navigation can be facilitated through the use of the keyboard for tagging, flagging, opening feed tags, changing layouts and scrolling through feeds.

FeedLounge comes loaded with everything you would expect a pay service to come with; feed auto-discovery so you only need to supply the site's URL and FeedLounge finds out the rest, cross-browser support so FeedLounge looks and works great regardless of your browser, and feed validation. Feeds that require 401 authentication can also be used, no problem. However, there are some features you might not have expected. Users can not only import and export their feed list with OPML, but also flag posts similar to how emails can be starred in Gmail. If you have a del.icio.us account you can set FeedLounge up to automotically tag posts on your del.icio.us account that you have tagged from within FeedLounge.

However, I must say that the coolest feature is Tag/Search Feeds. Found on the third tab in the add a feed window (which is powered by Lightbox-like JavaScript effects), this feature lets you subscribe to dynamic feeds created based upon tags or search queries you provide. FeedLounge currently provides this feature for del.icio.us, Flickr, Technorati, eBay, DayPop, Feedster, Google Blog Search, IceRocket and Yahoo News.

Unlike most online feed aggregators, FeedLounge has an API allowing developers to link into the powerful service. FeedLounge also hosts a lively forum where users can ask questions, get answers and even request features. In fact, there is a voting page that allows FeedLounge to see what features people most want to see in the near future. The top item on this list is currently a feed/post search, with a mobile interface and displaying favicons for each feed coming in second and third. The large community has fostered the creation of user-submitted styles, Greasemonkey scripts and widgets.

As I hinted to earlier, FeedLounge is not a free service. Monthly subscriptions go at a reasonable 5 USD per month or 49.95 USD per year. At this moment payment is only accepted via PayPal, which might deter some users right there. Going through their blog, you can see how far they have come. However, there are a few things that I think would bring FeedLounge more users.

For a pay service, one would expect the utmost reliability yet there are currently three separate posts on the FeedLounge blog homepage talking about unscheduled downtime. In addition, feeds are not updated too quickly. On average, each feed is updated somewhere between an hour to a day. Subscribing to a fast-paced blog feed can easily show the weakness in this. A digg feed will routinely be several posts out of date. Yet, this might soon be fixed as it is on the voting page discussed earlier. Until FeedLounge gets all of these things worked out and displays favicons, which Bloglines already does, I think a 3/month fee would be more reasonable.

FeedLounge provides an excellent, easy-to-use RSS-aggregating web service backed by an active community. Despite a few drawbacks, the cost of the service can easily be justified by techies and news hounds alike. Hopefully the future of FeedLounge brings more servers and more employees to make everything on the voting page happen and get it all online with speedier servers. I switched from NetNewsWire to FeedLounge and haven't looked back since. There's nothing like grokking in a few of my favorite feeds in the midst of class.