It's not often that an SD memory card comes out and creates a ton of fanfare. When that SD card has integrated Wi-Fi abilities to immediately upload your photos, then you start to understand why all the buzz is justified. I am of course referring to Eye-Fi's long awaited wireless SD card. Amazingly, they were able to pack in 802.11 circuitry along with 2GB of flash memory in the familiar 24mm — 32mm SD form factor.

Surprisingly everything is inside the SD card, including the Wi-Fi antenna. If you factor in that the SD card will be somewhat buried inside a camera during use and the use of a strictly internal antenna, you can see why I was initially skeptical of wireless performance.

The Eye-Fi is like any other SD card, except that there is some setup to do first. Once that is all done, the point of the Eye-Fi is to upload your photos while your camera is on and connected your wireless network to one of the many supported photo sharing services and/or your computer. It appears as though Eye-Fi is aiming to make repetitive card readings and fiddling with a USB cable things of the past. 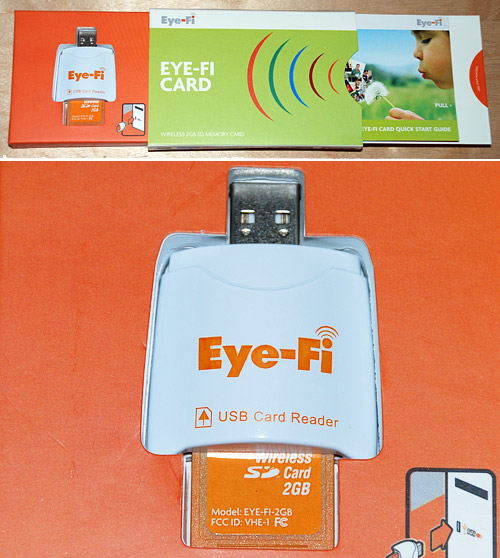 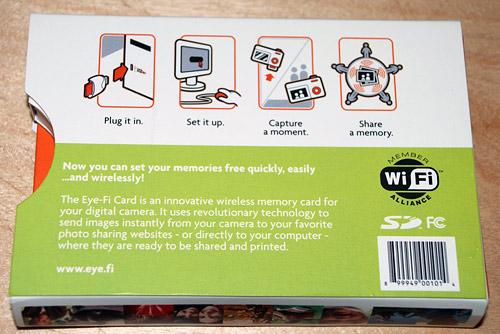 Setting up the Eye-Fi is fairly simple but involves installing local software on your Mac/PC (no Linux support) which receives settings from an Eye.fi account you must create. The first step is plugging the Eye-Fi with its included SD card reader into your computer. From there, you find the appropriate installer for your OS then install and run it. 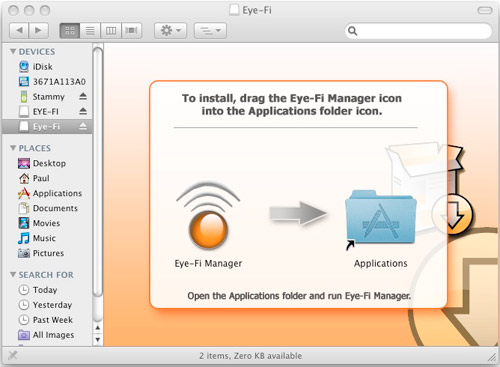 Running the Eye-Fi Manager fires up the Eye.fi website where you create an account. This account manages all of your Eye-Fi settings from whether to upload to your computer and any web services. 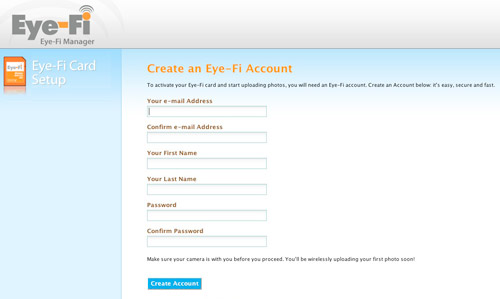 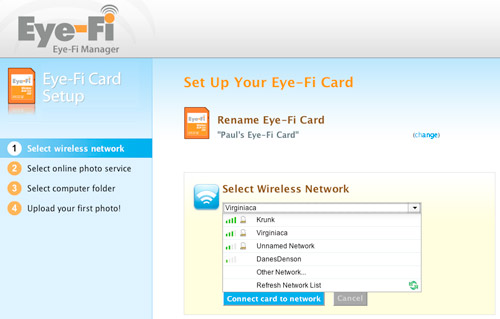 The Eye-Fi automatically detects wireless networks and if you give it permission through your OS (at least OS X did this), automatically fills in your WEP/WPA encryption key. Edit: The Eye-Fi can be configured to know several networks and connect to them when in range. Unfortunately, if you want to add another network, you'll have to change the settings manually on Eye.fi and place the card in the card reader - there is no way of doing this on the fly.

Don't worry about being in range of the network when taking pictures; Eye-Fi will upload pictures per your settings when you are back in range. Also, the Eye-Fi card cannot connect to networks that have login websites such as a T-mobile Starbucks hotspots and the like. 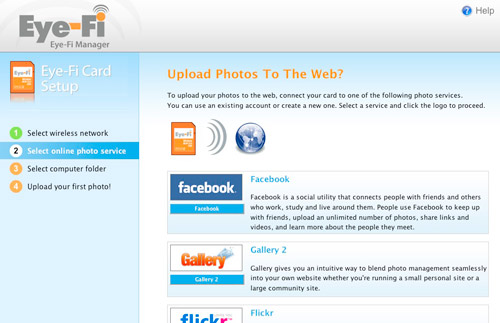 In this next step, you tell Eye-Fi which photo sharing services you will be using if any. Many are supported: Fotki, Sharpcast, Flickr, Picasa Web Albums, Webshots, dotPhoto, Photobucket, Facebook, SmugMug, Vox, Walmart, Snapfish, Shutterfly, Phanfare, Kodak Gallery, TypePad and Gallery 2. 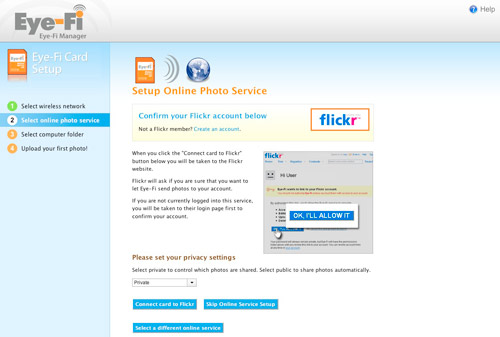 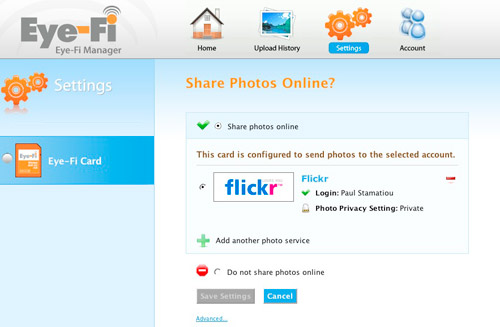 Setting Flickr photo upload preferences. I set them as private so I can see which ones I want to keep.

Setting up Eye-Fi to upload photos directly to a folder on my computer. 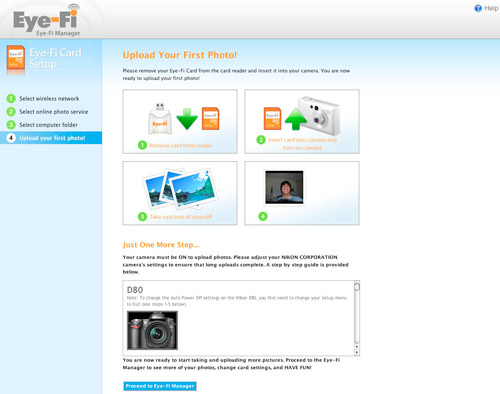 Depending on what camera you have, you might have to go through your camera's menu and change the Auto Power Off setting. The default on my Nikon D80 was 6 seconds and Eye-Fi instructed me to up that to 30 minutes to power the SD card while not actively saving photos on it. After you take pictures and are within range of your wireless network, you need to keep your camera on and Eye-Fi will automatically begin uploading photos.

Transferring an image from the Eye-Fi card to my computer.

Taking the average size of a 10MP image from a Nikon D80 set to JPEG normal, which is about 2MB, and dividing that by the ~15 seconds it takes to transfer each image I can calculate that the approximate transfer rate is 135KB/s. As this was from wireless access point 2 floors below me, I can imagine a throughput speed of up to 250KB/s being attainable. If you have an Eye-Fi card, I would be interested in hearing how fast images transfer for you.

While the Eye-Fi has noticeable drawbacks, I still love it and I'll tell you why. Ninety percent of what I use my camera for is indoor product shots for reviews. Prior to the Eye-Fi, I would constantly take the SD card out and stick it in a reader to see if the last shot I took was crisp enough to publish. Pictures might look great on the little display LCD on the camera, but they look completely different on a computer display. As such, I've found utopia in the Eye-Fi. Snap a pic, wait a few seconds and see if the image turned out okay - all without removing any cards or hooking up any cables.

However, therein lies another problem. What if I know an image I just took was bad? If I don't delete it immediately, it will be uploaded to my computer/photo sharing services automatically. There is no filtering or review system of sorts pre-Eye-Fi-upload. Also, professional and hobbyist photographers won't like the Eye-Fi as it doesn't support the RAW image format.

On the other hand, imagine this ideal use case: John is a 21 year old college student and has an Eye-Fi card in a tiny point-and-shoot camera that he takes with him to parties, fraternity functions and so on. At the end of the night, all John has to do is turn on his camera when he gets home and a short while later all of his pictures will be on Facebook. No fidgeting with any confusing photo uploading software or websites.

For 99 I would definitely recommend the Eye-Fi. At that price you get 2GB and wireless functionality - that's a steal. I'm going to set this up on my mom's camera so she can put family pictures on her neglected Flickr account. The Eye-Fi receives 9 out of 10 Stammys.

My friend Amit Gupta over at Photojojo currently has a bunch of Eye-Fi's in stock and he was kind enough to provide me with this review sample just when the Eye-Fi launched. I ended up liking the Eye-Fi so much that I bought it from him.

Do you think the Eye-Fi would fit in with your camera use?