When I wrote that I couldn't live without my Vudu box, I already had a Linux HTPC hooked up to my TV and still thought Vudu rocked. Why was that? There was no easy interface for me to work with all of the media files I had on the HTPC. Using a keyboard and mouse to navigate through Nautilus and manually play videos through VLC player isn't exactly the best living room experience. Enter Boxee.

I've had a Boxee account since June but only started using it in the last two weeks that I've had it installed on my HTPC. In the last several months, Boxee has received 4M in funding so they're definitely going somewhere. But let me backtrack a bit - what is Boxee? As you can probably already guess, it's a media center front-end of sorts for your computer. They describe it as the "open (based on XBMC), connected, social media center for mac os x and linux."

While I have yet to fully settle into a true Boxee setup with a wireless remote control (perhaps just a simple Apple remote if I can get a USB IR receiver and write a driver for it), I'll still be using my same HD setup to test out Boxee. The Linux HTPC currently runs Ubuntu 8.10, an experimental Nvidia driver for the motherboard's integrated graphics and has the same Intel Core 2 Duo 2.53GHz processor and 2GB of RAM. 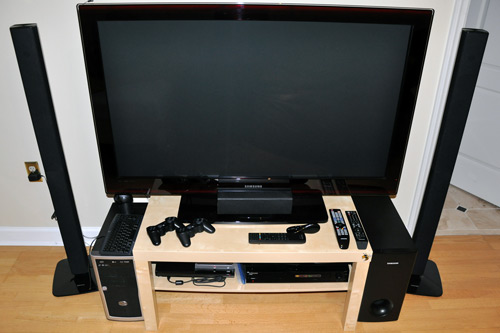 In the background, the HTPC runs a hellanzb daemon that is configured with my giganews newsgroups (aff link) account, making it a near-perfect media box.

Installation was a breeze and you folks are smart, so I'll just skip talking about that part. There are a few issues here and there depending on your hardware and software setup and for that a bit of poking around the Boxee forum should help out.

After installation, I just added a few folders as media sources (supports Samba network and UPnP shares too) and Boxee had no trouble listing my content, even downloading album/media artwork when it automatically recognized some of it. I'm not certain if Boxee looks at metadata/ID3 tags only or if it also tries to infer titles based on filenames, but it only recognized a few TV shows and movies out of a terabyte of my media. That's not a big deal though, playback is fine, you just can't tap into Boxee's special sauce - sharing things like recent plays with friends, rating media and viewing media information such as movie summaries.

In addition to Boxee helping your friends make media recommendations for you, many users flock to Boxee for it's native support for many online video streaming services (unfortunately Hulu was recently pulled). However, that's not why I'm using Boxee. I'm using it to painlessly manage the stockpile of media I already have on my HTPC. That being said, this post comes from my usage of Boxee and as such I won't be mentioning much of Boxee's Internet video streaming, built-in BitTorrent client, Python plugin system and other such features.

But I digress.. Firing up Boxee for the first time is quite an experience. Slick as hell comes to mind.

I navigate Boxee with a keyboard but I only need to use the arrow keys and enter/escape buttons so if you have a wireless remote control, mapping keys should be a pain-free process.

Pro Tip: Setup another Boxee account as your "guest" so your Boxee friends don't call you out on watching a Beyonce music video when your guests use your Boxee machine. I learned the hard way. 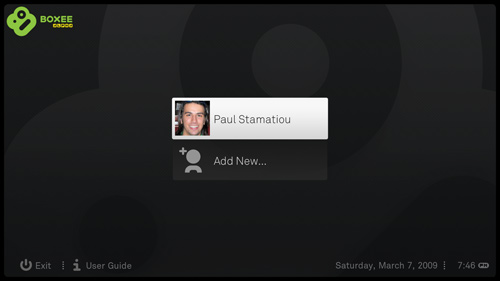 The Boxee home screen is your typical dashboard showing off recent activity within your Boxee network. 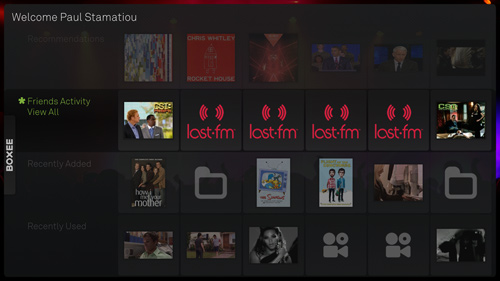 Most of Boxee's navigation is done with a few left and right sidebars. The left sidebar splits up media types and settings while the right sidebar (not shown) lets you change up view options when inside a directory. 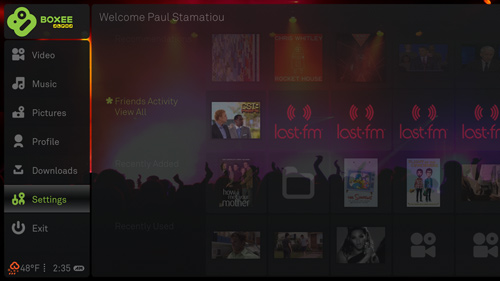 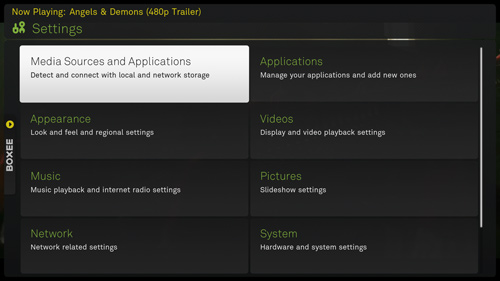 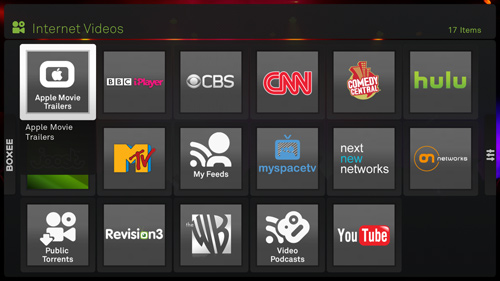 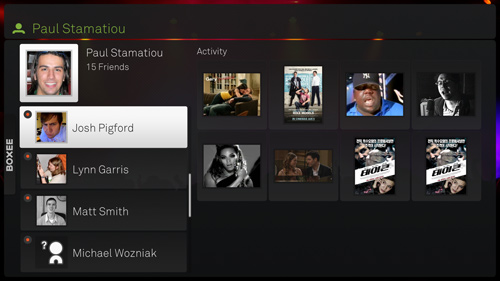 Friends on Boxee and their recent activity

A typical in-directory list view for Boxee. With long directories, scrolling down quickly brings up the current letter you're on (like the iPhone), however I would have liked a way to just start typing the name of the file/folder I'm looking for and have it auto-scroll there. 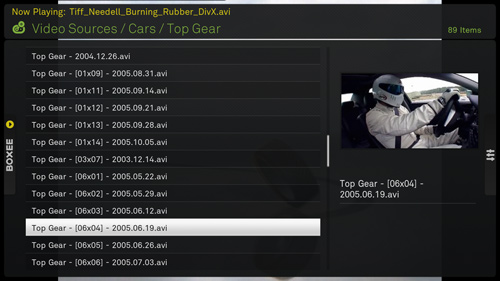 Content that is recognized by Boxee will have several additional actions aside from just playback functions. In this case, it let me read more about the trailer I was watching, rate it as well as recommend it to friends. 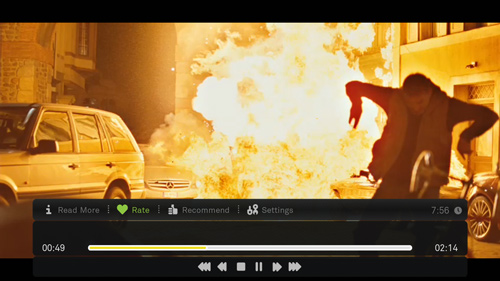 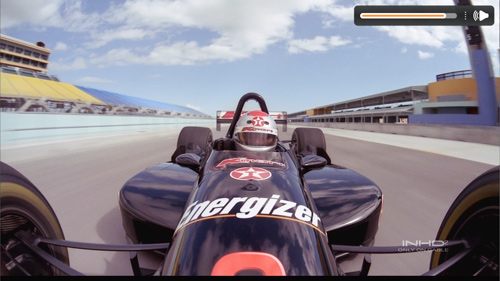 Boxee's "core" video player advanced playback features will allay any worries media freaks might have. You have access to scaling the video as you like, cropping black bars, adjusting brightness and so on. 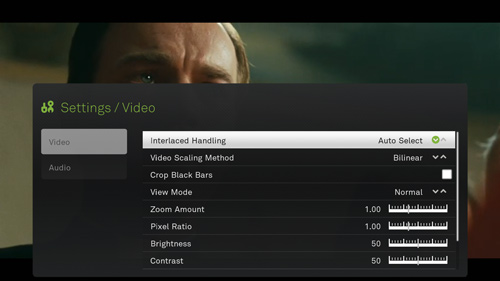 And don't you just hate it when the the sound is off by ever so much? No problem, Boxee lets you fine-tune the audio offset (as well as with subtitles too). 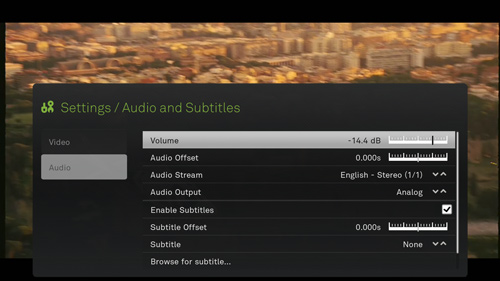 I should start this section by saying Boxee is alpha software. Depending on your setup, you could have quite a quandary on your hands. I have run into various issues with sound dropping out (usually sudo alsa force-reload and then restarting Boxee fixes it), Boxee and Ubuntu hard crashing, as well as just complete Boxee sluggishness when navigating the menu and trying to play media (for some reason small MPG files do not like being played back with Boxee).

But once you do get it working and assuming you have at least respectable hardware (unfortunately video hardware acceleration is not yet supported), Boxee flies. Boxee's video player can pretty much tackle any type of non-DRM-protected media you can throw at it:

As briefly mentioned above, the biggest complaint I have is the occasional sluggishness I get when loading videos. After a while they play just fine though. I also experience this sluggishness when attempting to fast-forward through a movie. Tapping the right arrow key a few times doesn't always work. However, from my experience scrolling/seeking through large video files is a resource-intensive task so I can't place too much blame on Boxee for that. I'll update this post if/when I upgrade my HTPC to a quad-core Intel Core i7 setup and see how that changes things.

I give Boxee 8 out of 10. This is still an alpha product; I can't imagine what the final version will be like. If you have an Apple TV you can get Boxee running on it as well, just don't expect HD content to work.

What do you use for your media playback? Do you have a dedicated HTPC?