BlackBerry's latest smartphone offering, the sleek Curve, fits right in between the Pearl and the QWERTY keyboard sporting 8800. The Curve is aimed at a slightly different demographic than your traditional BlackBerry user, a business professional. As such, RIM shaved off some weight as well as a few "strictly business" features such as GPS from the 8800, then tacked on media features and came up with the Curve. The BlackBerry Curve is smaller than most smartphones, while besting them in value and performance. Let's see what else it has. 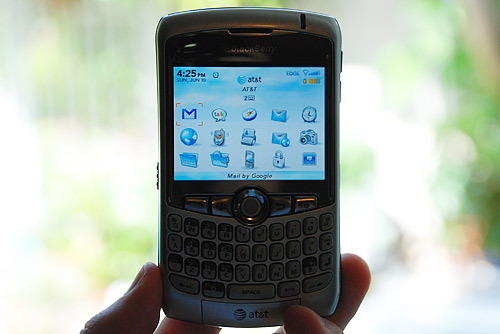 The BlackBerry Curve is only offered by AT&T at the moment.

My first impression of the Curve was that it is spectacular - great design with a top-notch paint job that can be likened to a metallic and clear coat finish on cars. Subtle chrome accents finish off the lightweight package. Sizing up at 4.2 x 2.4 x 0.6 inches and weighing only 3.9 ounces, the Curve is the smallest and lightest BlackBerry boasting a full QWERTY keyboard.

I began by finding all smartphones I could get my hands on and compare the Curve to them. The Curve is only a tad thicker than the Motorola Q and the Samsung Blackjack. However, the Curve is shorter than both of those phones. As you might expect, the Curve is much smaller and lighter than any current Treo, although the upcoming Treo 800 might give the Curve a run for its money if the rumored pictures are in fact real. Regardless, the Curve gains top marks in this category at the moment.

First off, there are countless BlackBerry-compatible applications. Off the top of my head, I have grown to love Google Maps for mobile, Google Talk for mobile, JiveTalk (instant messaging) and Google Mail for mobile (to access my Google Mail for your domain). Also, the Curve has support for a new BlackBerry feature, spell-check.

The interface is composed of numerous icons as your desktop of sorts. You may also opt to change the theme so that your calendar appointments and such are displayed on the home screen, similar to the default layout on Windows Mobile devices. Each icon can positioned to your liking or moved within folders. Overall, the interface just makes sense.

Menus and options are brought up by pressing the options button between the scroll ball and the green call button. While I found this handy, I wished that longer menus had some sort of hot keys to quickly select a menu item. For example, the browser's menu is relatively lengthy with the bookmarks option close to the bottom of the menu. Wouldn't it be great if you could just open the menu and then hit "B" to open the bookmarks? It's just a minor usability annoyance.

Combined with the Curve's easy-to-use scroll ball, navigation is better than I've experienced on any other smartphone. I thought about whether the jog/scroll wheel found on other smartphones would be better than the Curve's scroll wheel, but it's not. As you would expect, the scroll ball scrolls in any direction so it's just more functional. However, over time I am worried that the scroll ball would get dirty (a la Mighty Mouse's dirt-prone scroll ball) and be a pain to work with. The Curve isn't old enough for people to have experienced that problem yet I suppose. 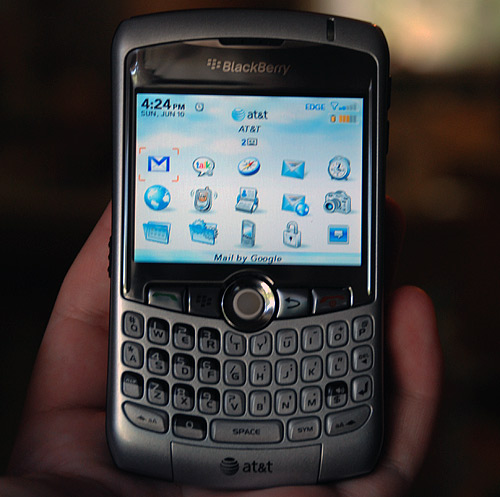 The Curve has a QVGA resolution 2.5-inch LCD display that excels at displaying vivid colors.

The highlight of the Curve is its full QWERTY keyboard. Unlike the 8800's keyboard which has no spaces between the contoured buttons, the Curve's keyboard has a more favorable (more favorable for me) spaced out keyboard. It is slightly smaller than the 8800's keyboard. It took me a few minutes to figure out turning on caps lock and all of that, but I love it. I can type fast enough on it that when I'm talking to people in Jivetalk/Google Talk, they don't realize that I'm on a BlackBerry.

The Curve is more of a "fun" phone than a business device. RIM included a Media application that reminds me of Apple Front Row, but that's not a bad thing. As I have made clear in numerous posts, I'm not the type of person that would use media features on a phone but the Curve's media application is better than the media application afterthoughts littering most phones. In addition, there is a full-size 3.5mm headphone jack so there's none of that proprietary headphone adapter dongle nonsense.

Coming from a low volume Pantech C300, I found that the BlackBerry Curve's call volume was good but I definitely wouldn't mind if the speaker could go louder. Users that value call volume should take advantage of the Curve's Bluetooth 2.0 capabilities and invest in a Bluetooth earpiece. During a call, call volume can be adjusted on the fly with two buttons along the side of the phone. Also on the sides of the phone are 2 customizable buttons. I have mine set to open the Google Mail app and the other to fire up the camera.

The Curve's camera is 2 megapixels and placed on the back of the phone with a shiny mirror-like surface and LED flash. Image quality left some to be desired with generally fuzzy pictures and washed out, off-key colors for an overall contrast-lacking image. I would consider the image quality to be around a 6 or 7 out of 10. Also, the camera cannot be used to record video clips. 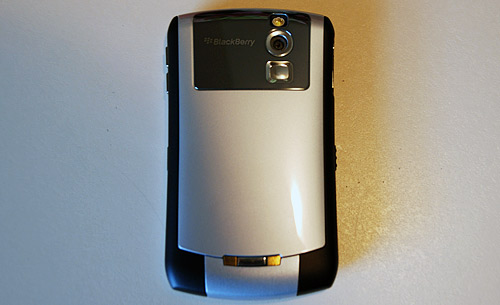 There is no support for 3G or Wi-Fi networks with the Curve, only AT&T's 2.5G EDGE network. However, I haven't been let down by the speeds. My website fully loads in the browser in about 6 seconds. You don't get the feeling that it's slow when talking on instant messenger, but when using the Google Mail for mobile application refreshing the inbox takes about 5 seconds.

If you're all about media features, the Curve supports a microSD card under the battery. Other added functionality relies on the Curve's Bluetooth capabilities, such as a Bluetooth earpiece or Bluetooth GPS receiver.

The attractive Curve retails for 199 USD with a 2 year contract but rather than be tied down to a contract you may opt to purchase it outright at 449 USD. The Curve's strong point, aside from the phenomenal form factor and design, is the software. It's backed by proven BlackBerry services such as BlackBerry Enterprise Server (for corporate email behind a firewall) and BlackBerry Internet Service (for individual access to ISP and corporate email). If you have an email account, the Curve will be able to use it. It's not running some one-off proprietary software, so developers are motivated to develop applications for it.

(On a side note, the Google Maps for mobile application is amazing. I was able to search for a restaurant just by name, find out their hours, see if they accepted my credit card and get step by step directions after checking to see if there was any traffic in the area.)

The Curve's battery lasted around 3 days on a full charge with my typical use; checking email every hour or two and making a few calls. Just make sure you don't stay logged into Jivetalk/Google Talk as that will suck battery life. Despite a few shortcomings I am happy with this phone, really happy. I haven't experienced any OS or application crashes. I would definitely recommend it to anyone looking for a device to check email, etc., with ease.

The only considerable downside to the otherwise excellent BlackBerry Curve involves its SAR radiation level. It ranks in with a rating of 1.51 watts per kilogram, placing it on the top 10 highest radiation emitting cell phones list. For the safety of your future children, I would recommend not keeping the Curve in your pocket if you catch my drift.