The saga continues as I go to all lengths to find 5 bars of cell phone reception at home. It first started when I moved into my new apartment. I didn't think to check my cell reception when first touring the property so I was in shock after I moved in and noticed I had No Service. In the meantime, I signed up with Vonage for a VoIP line, but I hated having two phone numbers. I experimented with the Wi-Ex zBoost cell signal booster and that worked, but there were drawbacks. It only provided a 6 foot radius of signal, the booster would need occasional reboots and had an unsightly cable and device stuck to my window at all times. Arrrgh! 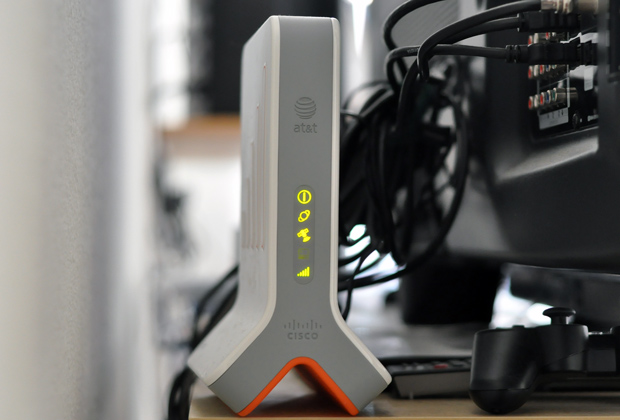 The 3G MicroCell hidden behind my HDTV

Needless to say, when I first heard reports that AT&T was tinkering with femtocells back in January I was ecstatic. I called several high-level people at AT&T to find more about the femtocell and see if I could get in on the beta testing. That didn't get me anywhere, so I waited my turn. A few weeks ago I received a flyer in the mail. AT&T's femtocell offering, marketed as the 3G MicroCell, was at an AT&T store near me. At the time of this writing, the AT&T 3G MicroCell is only offered in limited test markets and is only available in North Carolina and parts of Georgia.

Let me backtrack a bit and describe what a femtocell is and why it makes me happy. In layman's terms, a femtocell is a small cellular base station designed for home use. A femtocell extends indoor cellular network coverage by connecting to a broadband Internet connection and sending voice/data information through that connection. Give the femtocell power and ethernet, and you receive 5 bars in return; or at least that's the idea.

While femtocells are not technically VoIP devices, they are similar. Both use your Internet connection to transfer voice (and for the femtocell, data too), neither connects to a real cell tower, and both require that you register your physical address for emergency call (911, etc) purposes. Femtocells do utilize cellular service (not towers though) to connect to the phone, so they can't be considered full VoIP devices. You might be able to get away with calling them Cell-to-VoIP devices. As you have surmised by now, femtocells are not repeaters or boosters like the Wi-Ex zBoost I reviewed.

I don't use many minutes on my plan (450 minute plan.. with thousands of roll-over minutes), so I just paid the 150 for the device. The in-store purchasing experience took a little longer than usual. They make you log into the AT&T website (be sure to know your login information) and register the device, as well as fill out and sign a form with your physical address, for E911 purposes. Once you have logged into the website and clicked the "Manage AT&T 3G MicroCell" link, you get a page like this: 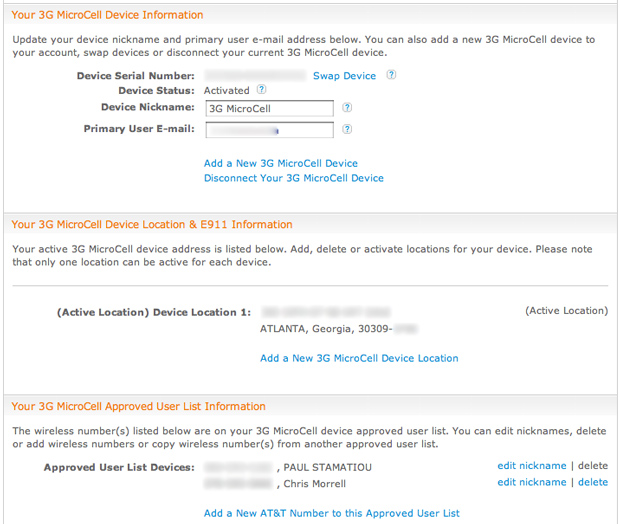 The important bit is near the bottom, where you can authorize up to 10 phones/devices to connect to your MicroCell. However, it can only support up to four simultaneous voice/data sessions. I added a friend's iPhone to the list, as he frequently visits. Surprisingly, he is able to connect to the MicroCell in most of his apartment. He lives 2 floors down and across a courtyard and gets 3 bars of MicroCell service — impressive!

Unboxing the MicroCell is a rather trivial event. Much like a Wi-Fi access point, you get the device, an ethernet cable and power adapter. However, unlike your Wi-Fi access point, the MicroCell has a stupid setup process. After giving the MicroCell some power and ethernet, it will start blinking the 3G and GPS LEDs. Wait, what.. GPS? Yep. To limit the MicroCell from working outside of test markets (or out of the country too), it must get a GPS lock on your location. AT&T suggests this should take no longer than 90 minutes. It took me about 5 hours. 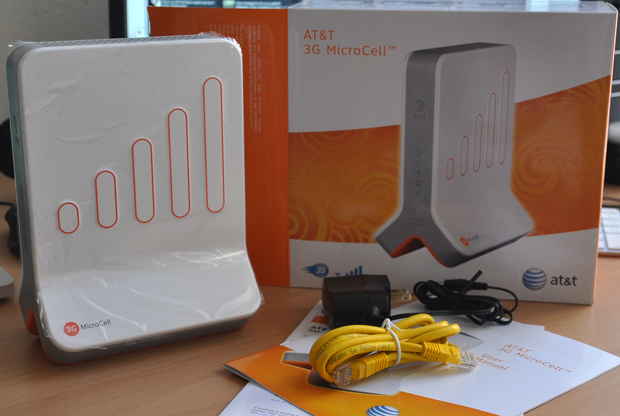 My apartment gets absolutely no signal of any kind, so why would I be able to get a solid GPS satellite lock? Ridiculous. I called AT&T, as they recommend, after the MicroCell had not begun working after 90 minutes. They took my information down (basic stuff like how I had it setup, how fast my Internet connection was and if I followed the directions) and told me a higher-level technician would call back. The aforementioned technician did call, but only many hours later after the MicroCell began working on its own. 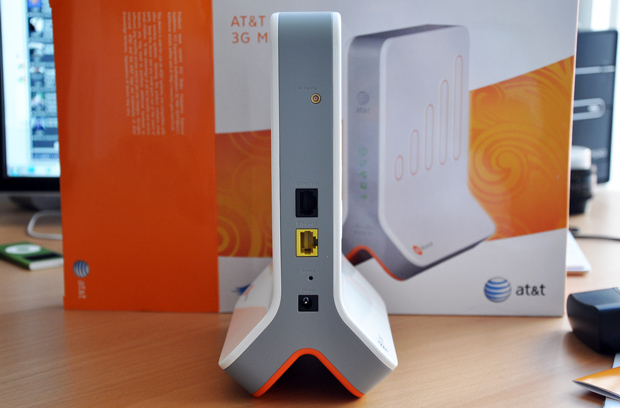 The business-end of the MicroCell

Others have reported the installation only taking 30 minutes to achieving GPS lock, so I am very likely an outlier with my horrible GPS signal situation. That being said, you might have noticed the tiny antenna jack on the rear of the MicroCell. That is for people in my situation with poor GPS reception to add an antenna to enhance GPS reception. Unfortunately, AT&T provides no information about where to find such an antenna, leaving all but the tech-savvy in the dust.

Aside from the troublesome setup, the AT&T 3G MicroCell is excellent. With a centrally-located MicroCell in my 723 square foot loft-style apartment with few walls, I received 5 bars in every room and no degradation of call quality while moving about. I have only tested the MicroCell with at most 2 devices connected, but in my experience call quality is as good as I have ever heard from an iPhone 3GS. The MicroCell does also improve 3G data speeds and I received 1.5Mbps download and 56kpbs upload speeds. Compare that to my typical 3G data speeds for good signal: ~930kbps down and ~50kbps up. Of course, this means little to me as my iPhone automatically connects to my Wi-Fi network at home.

Call quality depends, in part, on the speed of your Internet connection. As long as you have some form of broadband with decent latency (AT&T states minimum bandwidth of 1.5Mbps down and 256Kbps up), I do not believe you will have any issues with at least one phone on your MicroCell. You might, however, want to pause your downloads or any rigorous network activity while you are on a phone call.

In over a week of testing I have not experienced any degradation of call quality, even when I was soaking up tons of my bandwidth (I was downloading via newsgroups at about 11MB/sec). Although during rigorous network usage, a bandwidth test on my iPhone showed download speeds around 400kbps, from 1500kbps. For not as fortunate users that experience call degradation during heavy network usage, there is the option to setup the MicroCell in such a manner that cell traffic is given priority over all other traffic on the network (the MicroCell is connected in front of your router so it goes modem » MicroCell » router).

iPhone speed tests: Regular 3G, MicroCell 3G and Wi-Fi (you can see why I don't use 3G at home..)

Another factor for MicroCell call quality is device distance to the MicroCell and how many walls are in-between. AT&T optimistically states that the MicroCell "supports both voice and data up to 5000 square feet." However, I have a hard time believing this is actually achievable in homes that have these things called walls between rooms. If you live in a large multi-story home, you might be happy to hear that it appears you can have multiple MicroCells under the same account, assuming you are more than happy to give AT&T another 150.

Go to any iPhone or AT&T forums where people are talking about the MicroCell and you will no doubt find a loud minority of furious AT&T customers. Those users believe, as do I, that AT&T customers should not have to pay extra to receive better cellular coverage to make up for AT&T's sub-par network. However, my issue is not that AT&T has a bad network (I get 5 bars directly outside my apartment), it's just that my apartment complex's unfortunate construction is such that it blocks/reflects many signals. I gladly paid for the MicroCell out of my own wallet, which allowed me to dump my 26/month Vonage VoIP setup and not have to deal with having two phone numbers.

Out with the old Vonage VoIP setup...

AT&T has not gone on the record about a definitive national launch of the 3G MicroCell, rather they are slowly rolling out to new test markets. Seattle and San Antonio are coming next.

The AT&T 3G MicroCell gets 9.5 out of 10 Stammys. Setup was a huge pain, but I can forget about that for the great service and call quality it provides.

9.5 out of 10 Stammys. Funny graphic originally created by Tim Dorr as a joke.

Would you pay up for having 5 bars of AT&T service at home? What do you think about having to pay for cellular network coverage that you shouldn't have to pay extra for? Currently an AT&T customer?