I've been using the new MacBook Pro as my primary computer for the last two weeks now. Equipped with an already outdated Intel X25-M SSD (SanDisk is working on something "100 times" faster) I put in myself, this is easily the best computer I have owned to date - despite a few issues I have found.

Before I go any further, let me state that this won't be a definitive review of any sort. If you love technology like I do, you already know tons about this laptop. If not, here is some catch-up reading: TUAW's review, Apple Insider's review, ArsTechnica's review, Gizmodo's review, TAB's review.. and you get the idea.

There has been quite a bit of noise around Apple's decision to ditch FW400 in favor of FW800, and to move to DisplayPort (mini at that) instead of DVI. My thoughts: good decision Apple. They're trying to push the industry into the right direction by making bold moves to force users to adopt the latest tech. First off, FW800 is backwards compatible with FW400 - all you need is an adapter, if you really still use FW400 devices.

Second, DisplayPort is going to replace DVI anyway so why not start now?

All you have to do is push a flap and a nice battery/drive bay cover pops open. From there, only 1 screw secures the hard drive, with 4 torx screws used as pegs to keep the drive suspended in a rubber-padded drive cage of sorts. 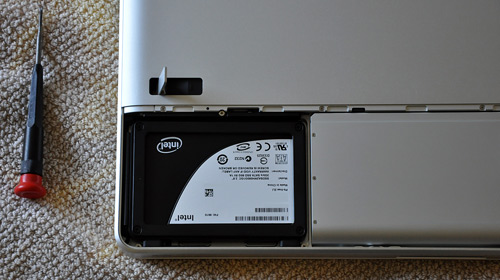 Note: This is not the drive that comes with the MBP.

The battery is just a pull tab away from swapping it out. Unlike the old MacBook Pro batteries, the new battery does not contain the battery level meter anymore. That is now incorporated into the left side of the laptop. While this is nice, I can imagine it is a slight drawback for people that travel with 2 or 3 batteries, as I did with my last MacBook Pro. Now users won't know how much charge each battery has until they put it in the laptop.

The 2.53GHz MacBook Pro I'm using has 512MB of RAM for the NVIDIA GeForce 9400M and 9600M GT GPUs onboard. Why does a laptop need two graphics chips? The 9600M GT is used for better performance with graphics-intensive applications and games (OS X Snow Leopard will actually be able to use GPUs to take the load off the CPU for some tasks) while the 9400M can be used for better battery life. Unfortunately you have to log out to switch between GPUs, which is not the case with using Hybrid SLI in Windows.

Unlike what The Apple Blog claims (below), I did not find the graphics performance to be even nearly that great.

Game performance is as you would expect — nothing short of exceptional. The popular games I tested were able to run with settings at their most detailed, at full resolution, with no noticeable problems.

Perhaps if you have only owned Apple laptops all your life, the graphics in the latest MacBook Pro would seem amazing, but in the grand scheme of things they are still mediocre. For example, while playing Call of Duty 4 I was able to play at 1440x900 but with no AF, no AA and the other settings set to medium. Even then that configuration got around 30FPS most of the time and a choppy ~15FPS when there was lots of action going on. You can definitely get a gaming session in, but you won't be gawking at the best graphics, that's for sure.

However, I was able to play Spore, a not so graphically-intense game, at full 1440x900 resolution with settings maxed - although I lowered some settings a bit to make it more "comfortable" to play. Gizmodo has a few test videos of Spore playing with all settings maxed.

I suppose the thing to take away from this is that yes, you can actually "game" on the MacBook Pro now.. to a degree.

The new trackpad is itself a button. If you use it as you would the previous trackpad, with your thumb doing the clicking at the bottom portion of the trackpad, you won't have much of an issue using it. After using the trackpad for a week I had no problems with it. 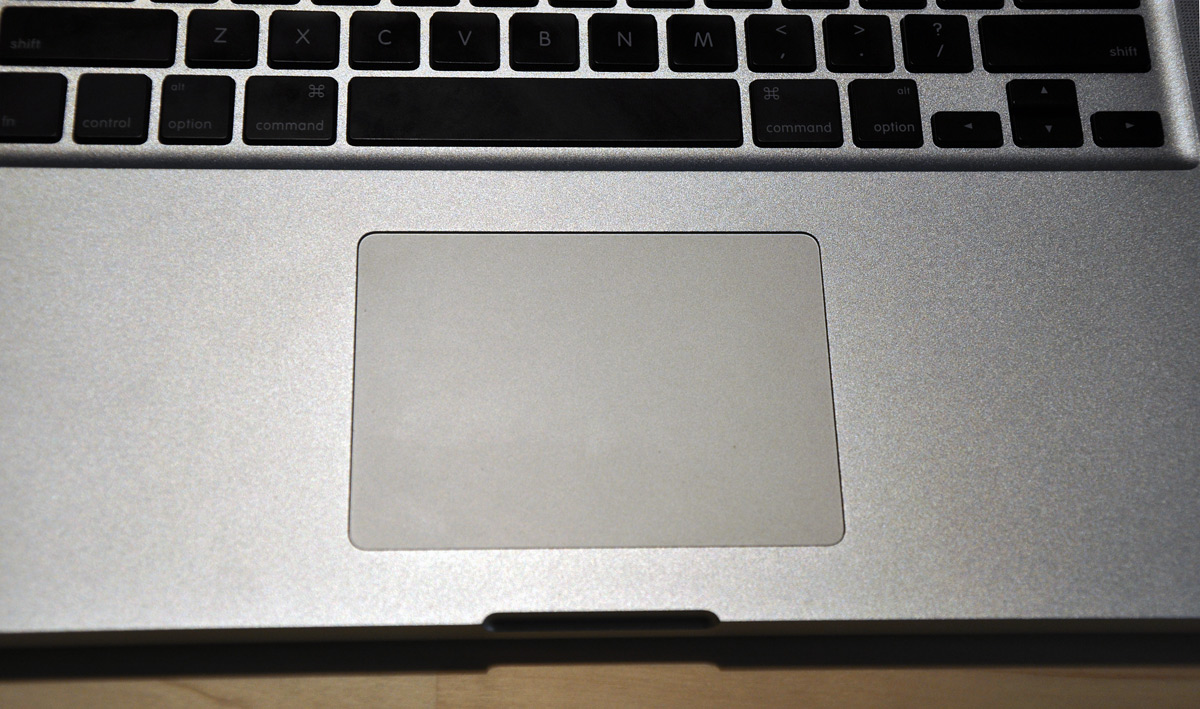 Enabling tap to click helped a lot during my transition period of getting used to the new trackpad, as it was fairly awkward having to push down the entire surface for every single click. The trackpad supports one finger right click as well, for either the bottom left or bottom right. 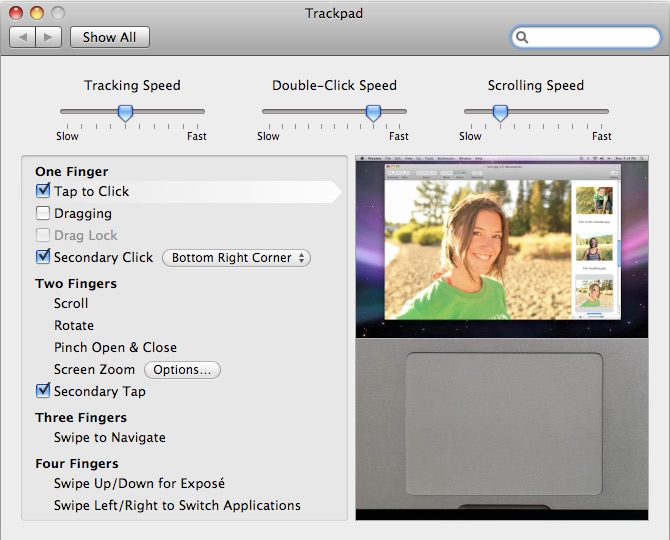 As for new finger gestures, there is four finger left/right swipe for switching applications and then up/down for Expose. I have tried adopting the four finger gestures into my workflow but using active screen corners for things like Expose seems easier to me.

You've read about it everywhere; the new MacBook Pro is pretty darn glossy and reflective. Even more so than the old MBP which simply had a glossy filter on top of the display. This time it is actually the iPhone-like glass display and bezel cover that is doing the reflecting. 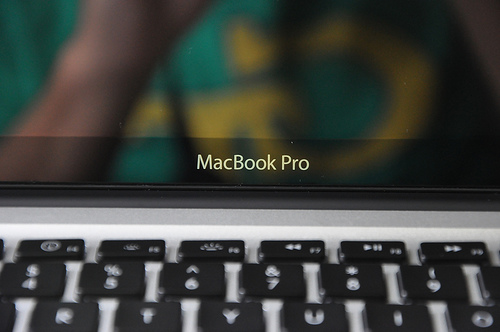 In the glare: me wearing a St. Patrick's day edition Georgia Tech t-shirt

How does it actually fare in the real world? In the typical class room, with overhead fluorescent lighting, the new MacBook Pro is fairly hard to use. I want to save battery power and keep the backlight low but with a ridiculous amount of glare I don't really have much of a choice but to max the backlight brightness. Even then there are times when I still can't see parts of the screen. 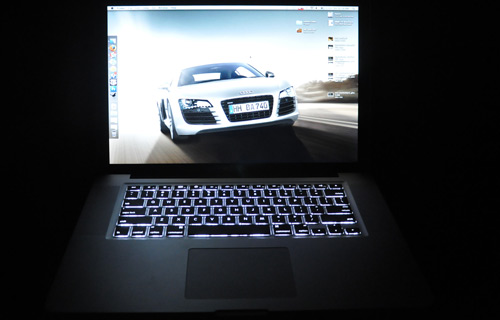 On the other hand, I often work in a batcave at home so I am not bothered by any glare whatsoever. That and to be honest, my MacBook Pro is connected to my 24-inch external display about 75 percent of the time. 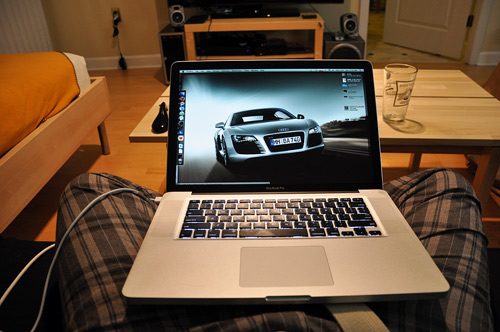 Pictured above: The MacBook Pro as I'm using it right now - no glare to be seen, as the light is in front of me. It really just depends on how your workspace lighting is setup, and if you can't control that, then you will have a big issue with the glare. Aside from the glare, the display definitely stands out in the crowd and is slick, very bright yet still dishes out vivid albeit not necessarily accurate colors.

My first battery test was with the graphics set to use the 9600M GT and backlight brightness set to 50 percent. I did basic Wi-Fi-enabled productivity tasks like taking notes in Google Docs and browsing the web. That test yielded 2 hours and 12 minutes.

With the more energy efficient 9400M GPU enabled I was able to get 4 hours and 24 minutes of battery life. That number touched just barely 5 hours after I had installed the Intel SSD. Anything over 4 hours of battery life is remarkable to me so I'm very happy with this for such as large laptop.

Note: My definition of a battery life test is until OS X provides me with the reserve power warning, not until the MBP goes to sleep by itself.

While I was unable to capture this in a picture, I have started noticing that the keys leave a mark on the screen - like the infamous problem the old Titanium PowerBooks had. While the keyboard is in fact recessed into the unibody frame, I can see that the keys stick out above the recess ever so slightly. I will have to wait a bit longer before applying further judgment. It might just be my MBP, or it might be how I stick the laptop in my messenger bag everyday along with another notebook.

Leave it to Apple to create a solid, high-performing product with one blatant Achilles' heel, the glossy display. Aside from several nitpicks mentioned within this article and the ridiculously glossy display, I have no problems with this notebook whatsoever. It has excellent battery life with the ability to play games as well, easy access to the hard drive, 4GB of DDR3 RAM as standard (with the ability to support 6GB now, and with Snow Leopard hopefully 8GB), a comfortable keyboard, spacious trackpad and amazingly sturdy construction.

Bottom Line: Can you live with a very glossy display? I can, but I'm not exactly smitten about it.

Any questions? Do you have a new MacBook/MacBook Pro? How do you like it?