I'm in the market for a VESA arm for my iMac. Being the massive 24-incher that it is and my desk being several inches taller than I'd like, looking straight on I'm gazing at the middle of the screen. For comparison, the Occupational Safety and Health Administration states that the top of your monitor should be at or below eye level. But then again, they have a picture of a small CRT on their site so I don't think they had larger displays in mind when they wrote that. 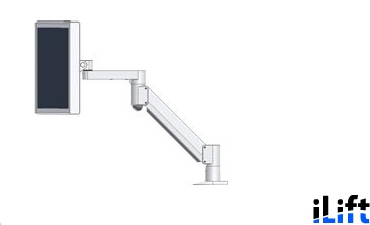 So far I've found the iLift, which can support the 25lb iMac, in addition to the Ergotron 200 series arm. Unfortunately, the Ergotron offering is in black and won't work well with my setup while the iLift comes in at 353 not including shipping. I ordered the requisite VESA mount adapter kit from Apple and worst comes to worst, Chris was pondering about welding me up some makeshift steel pole/C-clamp apparatus for my desk.

Has anyone had experience with VESA mounts and articulating arms? At this point, I'm just hoping that whatever solution I go for, my Ikea desk will be able to support the desk clamp - it's mostly hollow wood from the looks of it.

In the meantime, I will be writing a paper about "Information Diffusion in the Blogosphere" and how one blog will say one thing and later down the line another blog will absolutely misconstrue that information. I'll likely mention how many bloggers thought that Florence Devouard from Wikipedia stated that Wikipedia would shutdown in 3 months if they didn't receive more funding.