I recently decided to change the way I was taking care of my body. It should be no surprise that I am always on my computer – at least 12-15 hours per day. I am 5' 9" but used to weigh an undesirable 170-175 pounds. Most of this was brought on during my first years of college. I entered college as a skinny freshman with tons of energy that I soon channeled to my keyboard. Around January 2009, just after I had graduated from Georgia Tech, I began working full-time on Skribit from my apartment in Atlanta. My lifestyle had become one of pure startup routine. I was loving it; building what I wanted from home all day sounded like a dream come true. I used to run into "I haven't been outside in three days" situations regularly.

Before I proceed, I want to say that I have been meaning to write something like this post for a long time and many others on Twitter have been requesting the same of me. I finally got the motivation to write this post after reading Zed Shaw's great article, Common Programmer Health Problems, on Hacker News. It was the following excerpt that got me thinking about writing a post for programmers and startup folks that are looking for a way to learn some healthy eating habits while doing their necessary 12+ hours per day on the computer thing:

Finally, I've been the exact same weight, flexibility, and nearly the same strength my whole life, whether I worked out or not, which means that I probably can't tell you about how to lose weight. I'm most likely genetically predisposed to be this way.

Now you know where I'm coming from. I am not a doctor. Don't listen to anything I say below. I'm just telling my own little story.

I quickly picked up a coffee habit and relied on frozen food, eating out and take-out too much. I knew things had to change but I was too devoted to staying near my computer to do anything else. Nothing really changed until that summer when I decided to move to a cheaper apartment near a big park, hoping that the proximity would encourage me to go out for jogging more often. Going along with that notion I adopted a hyper black labrador/pitbull puppy to keep me company at home and drag me outside on walks several times per day. 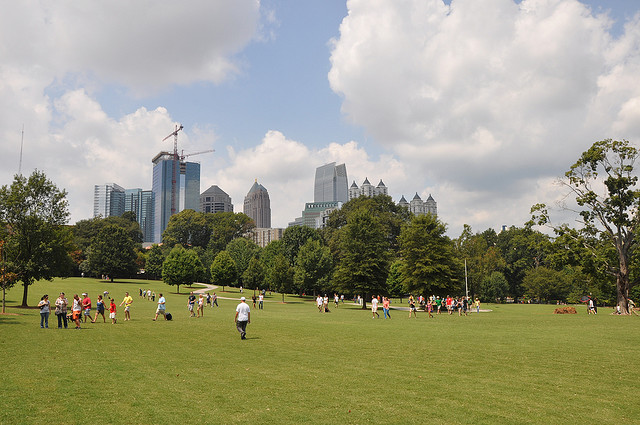 Then I started feeling really shitty. On the third day of having a 100+ deg F fever I went to the hospital for some tests. 3 hours and 3,000 later I found out my immune system was weak and I had caught mono somehow. No cure; just 2 months of perpetual fever, sleeping 18 hours a day and not eating much.

After that ordeal, I knew things had to change. I joined a kickball team (that I did for 3 seasons in a row) and started taking longer walks and jogs with my dog. That did not seem to help. It was time to radically change my lifestyle.

I have gone through "phases" before where I get involved with one particular sport or activity. For a while that was running. Heck, I even had my own Nike commercial:

But I never really saw results. Then in January 2010 I suddenly had the bright idea that maybe if I exercised and ate healthy I might see some positive results. Brilliant and utterly original idea right?

This time I was not going to mess around. I was serious and had all the motivation in the world. I began by going through my kitchen and throwing out everything unhealthy or snack food related. I evaluated my current caloric intake, roughly 2,150 calories per day with a 25.1 BMI, when I started. For the next three months I was strict with everything I ate. I began logging my meals including calories, fat and protein content in Excel.

For the first two weeks I started with 1,700 calorie days. Then I went down to 1,500 for two weeks. Then I was on a strict 1,200 calories per day diet for about two months, with notable exceptions being days I would workout. Purely restricting calories is only part of the equation, it actually depends more so on what you eat and what portion of those calories are fat, protein and carbohydrates. Limiting yourself to 1,200 calories per day is extreme. There are many diets based around this; Google for "1200 calorie diet" or something similar. Again, I'm not saying this is the way to do it. You can do the same thing by eating 1,700 healthy calories and spending a bit more time working out.

I'll begin by listing some of the things I cut out of my diet:

I began each morning with breakfast. I made an omelette with onions and green peppers or scrambled eggs every morning — mostly egg whites, with a bit of yolk for flavor — with a slice or two of flourless sprouted wheat bread (I look for Alvarado Street Bakery that I have found at Publix, Safeway and Trader Joe's), a banana and a bit of healthy fat from almonds and walnuts. Other times I would have brown rice instead of the bread, or make this oatmeal. However, I tried avoiding all complex carbs like brown rice past noon. Complex carbs provide energy for your entire day as it takes your body longer to digest and thus release the blood sugar at a slower rate, but if you eat them too late and go to sleep, your body will store it as fat.

Lunch and dinner usually involved 4-6 oz of low-sodium, low-fat chicken (Trader Joe's has some great precooked, vacuum-sealed chicken breasts if you want to go the precooked route, but they are a tad salty), broccoli, unsalted corn or brown rice and a side salad with olive oil and balsamic vinegar. Between meals I would munch on apples, celery, carrots, grapes or a cup of non-fat Greek yogurt with some granola, raspberries and blueberries. 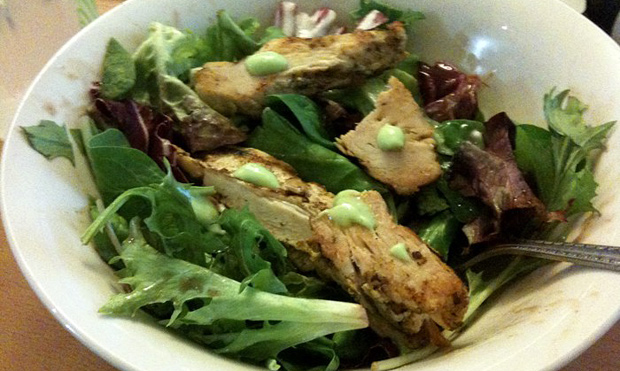 Balsamic marinated chicken with herbs from Trader Joes, salad and wasabi. I soon learned that I put way too much wasabi in that salad.

The first two weeks of being strict and counting calories were the hardest. I was always hungry, grumpy and tired. I pushed through and kept myself busy. Shortly after, I felt great despite the much lower caloric intake.

Then one day a week I would splurge and eat whatever I wanted. Yes, you read that correctly. Tim Ferris explains: 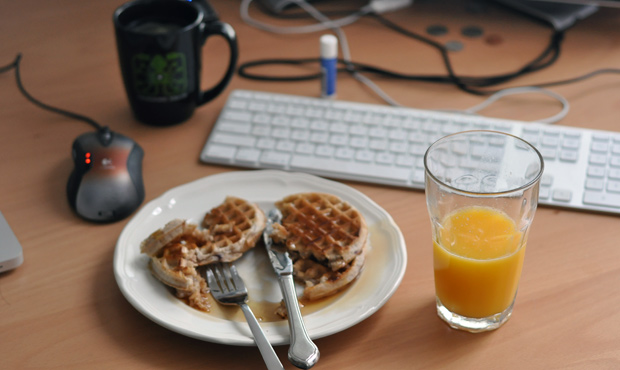 Sunday is usually my "let myself go" day and it usually starts with whole grain waffles and syrup (HFCS overload!) and orange juice (too much sugar).

You might have noticed one thing — these meals require cooking. The best thing you can do to help you take control of your health is learn to cook and stop eating out. I used to eat out a ton. Not only was it unhealthy but it added at least 200 to my monthly expenses. Instead, use that money and buy yourself a non-stick grill pan for cooking meats and an omelette pan. Get a smaller than standard 12-inch of the latter though, that makes it easier to cook single servings for yourself.

I made a point to learn how to cook at least one or two new things a month. I had no idea where to start so I turned to Twitter:

That led me to some great food sites:

With every meal and throughout the day, I drank water. Just water. Lots and lots of water. There was always a cup of cold water on my desk. I also took a few supplements alongside my regular daily multivitamin: flaxseed oil (ω−3), Vitamin C, and fiber with psyllium husks for digestive health, along with 5000 IU of Vitamin D3 in an oil-based capsule every other day (more info about Vitamin D). Vitamin D3 is quite possibly the most important of the bunch for programmers that stay indoors all day. Other eating habits I picked up along the way included eating slower and eating only enough to satisfy my hunger. That is to say that I usually ate half of whatever I ordered when I did eat out at restaurants.

The only time I wasn't drinking water was when I was drinking a whey protein shake along side a protein and complex carb heavy meal after a workout: 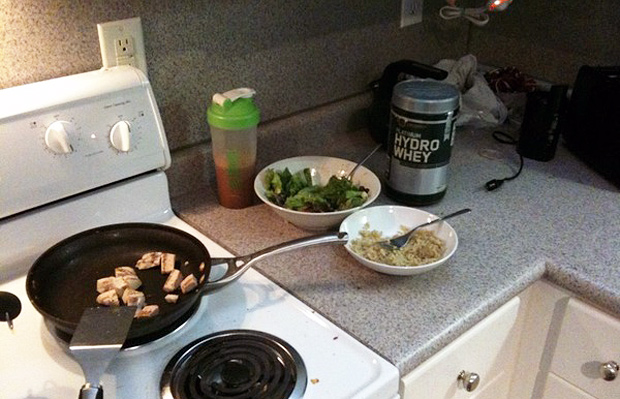 Which brings me to the next section — exercise. While I had been doing some minimal 1-2 mile/day walks in the park with my dog, I realized I would have to make a more serious workout commitment to start seeing any real results. It was around mid-January at the time and every gym near me was having some sort of New Year's Resolution deal. What would usually cost 350+ for the year would be under 150. Great!

With a gym membership in tow I began going every two to three days. For the first few weeks, I kept it simple with jogging on the treadmill or using an elliptical machine for at least 30 minutes. My motivation for going to the gym was rather stupid but it worked — I wanted to become the mayor on Foursquare. I never did get the mayorship.. the gym rat badge will have to suffice. 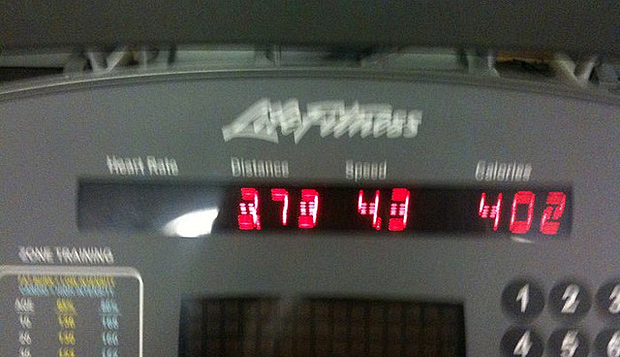 Then I began doing 30 minutes of elliptical or jogging and 30 minutes of a mixture of tricep dips, erg machine, shoulder press and some free weights. Again, I am not a doctor or trainer so I am not liable for what happens when you take my advice. That being said, while I did not have a trainer I would often workout late at night when there was no crowd (usually between 11pm and 1am) when the serious workout guys would go and they would often give me tips on proper form and technique.

This post may read like a brain dump as that is exactly what it is. Just showing my side of what I did to get a bit healthier. I'm not saying this is the way for startup folks to get in shape, it's just the route I chose while working on my last startup. If you're reading this and are interesting in doing something similar, start by just keeping a log of what you eat in a typical day. Use a site like NutritionData to look up calorie, fat and protein information if you're not sure.

In short: eat slower, eat healthier with good fats and low glycemic index carbs, eat proper portions and get outside of the damn house every day. Pro tip: do 15 pushups and 15 crunches as soon as you wake up. It'll get your heart rate going and wake you up like a cup of coffee.

As you can tell by the title of this post, my "startup diet" and exercise worked well for me. I lost about 35 pounds: 2-2.5 pounds per week for the first 3 months. Then I moved to San Francisco and didn't really workout for a few months but getting around the city by foot and walking at least 2 miles per day kept me in check. I'm now at 135 pounds with a BMI of 19.9 and 11.8% body fat. The next step for me is moving to a more protein oriented diet and building muscle, perhaps doing P90X that I have been meaning to try out. I no longer count calories but after doing it everyday for the first few months I have a good idea of the calories of most foods I eat. 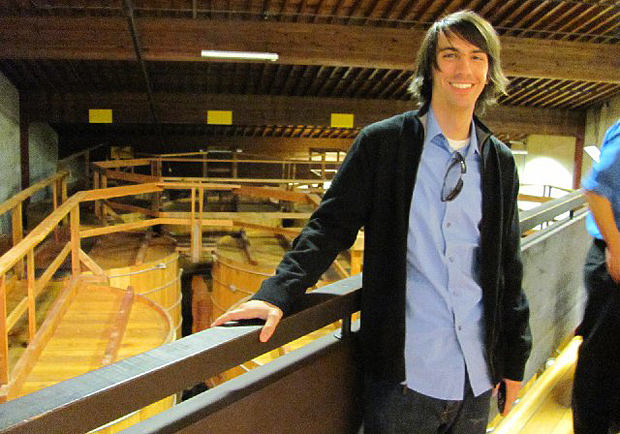 A healthier and happier @Stammy visiting a vineyard in Sonoma in April.

Thoughts? Do you fall into the category of unhealthy programmer/startup person? How many hours per day do you spend on the computer? Have any healthy eating tips? Let me know below!