Today was the day. I was about to set off on a 26 day journey on my own. After not having taken a vacation for year and a half I was more than ready to forget about work and do some gallivanting. New Zealand was always on my list and it seemed like the perfect destination for me to explore with a great mix of landscapes from beaches to glaciers along with bustling cities and charming towns.

I figured I would begin my journey in Auckland near the top of the North Island and drive all the way down, ferry across to the South Island then up to Christchurch. I picked out a few highlights but kept it open enough that I could wing the rest. As such, I only booked a hotel for the first night in Auckland and I would figure out where to stay the next night every night before I decided where to drive in the morning. It worked out beautifully.

Despite being almost a month-long trip, I tried to keep pack light for clothes and related items. Clothes would go in my rugged 34-liter GoRuck GR2 backpack and I planned on washing my clothes every few days in the hotel sink. However, I had another dedicated camera backpack with a bit of gear. I will eventually write a thorough post about what gear I traveled with soon.

SFO  ✈  AKL
And so the journey begins.

I had naively thought I could simply redeem the airline miles I had patiently been accruing. I had enough for first class flights, or so I thought. Unfortunately, United had something else in mind. I just could not find viable flights to New Zealand with award miles. The conversion rate for the miles was just abhorrent. I considered flying to Sydney with miles, then paying for a flight to Auckland but every itinerary seemed mediocre at best. I decided to book directly with Air New Zealand and just earn more Star Alliance miles.

I landed at 5:50am on a Monday morning in Auckland on the North Island of New Zealand. Upon landing I received a notification from my cellular provider Project Fi saying that my phone was operational and data would cost the same rate of $10 USD per GB. I purchased a backup Vodafone SIM at the airport but never needed to use it. 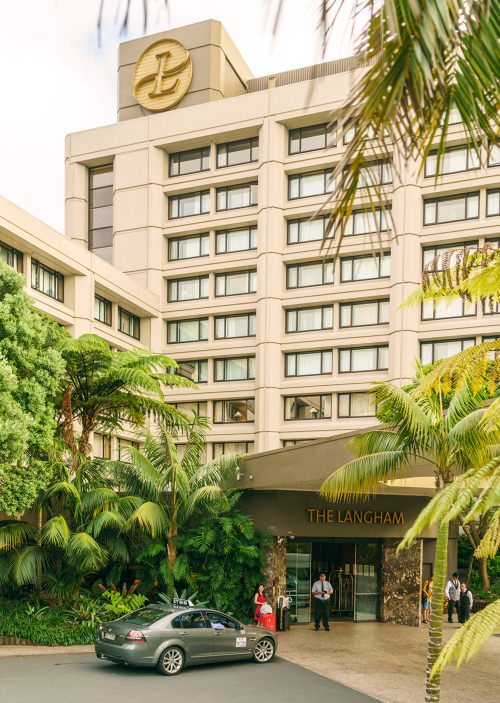 I picked up my rental car from the airport lot. Vehicles in New Zealand are right-hand drive (wheel on the right), making this my first time driving on the left side of the road. I had an 18km drive from the airport to get used to it. I consistently turned on the windshield wipers when I meant to use the turn signal on this drive (and a few drives after it).

But I arrived without issue and was ready to start my day in Auckland. It was too early to check into my room so I freshened up a bit and left my larger backpack with the front desk after a quick breakfast.

The hotel was a bit south of the City Centre, so I started roaming around with the goal of eventually making my way north towards the waterfront. I strolled through Myers Park before walking up Queen Street to see Auckland Town Hall and Aotea Square.

I veered off Queen St and passed the Auckland Art Gallery on my way to Albert Park. The sun was just starting to emerge, revealing some nice shots of the iconic Sky Tower—the tallest building in the Southern Hemisphere—in the distance.

I ventured around the Chancery shopping district near High St and Vulcan Lane before finding my way back to Queen St. It was around 11ish on a Monday so business folks in the CBD were out and about on their coffee and lunch breaks.

The Britomart Transport Centre is a large bus and railway station in the central business district of Auckland. It's adjacent to Takutai Square with a path between them lined by circular skylights intended to resemble Auckland's volcanic field (There are some 53 dormant volcanoes in and around Auckland).

I continued walking towards the water and strolled around the Queens Wharf. The sun was playing hide and seek for a while, eventually getting to 80°F / 26°C. Though it felt much hotter with the high humidity.

I came across my first i-SITE. I had heard about these everywhere while researching this trip. They're nice visitor information centers, but they are everywhere throughout New Zealand.

I made my way to the Wynward Quarter after passing the Wynward Crossing bridge and Viaduct Basin. The area is a recent and ongoing development to transform the previously industrial area into a prime waterfront restaurant and event district.

By now I had walked 6.1 miles in the sun and decided to catch some shade and enjoy a great burger with rosemary fries at Marvel restaurant. Afterwards I went to the hotel to pick up my car.

I felt I had seen a good chunk of the city and wanted to see the water for a bit. There were a few beaches on the western coast that seemed worth exploring: Karekare, Piha and Bethells Beach.

I ended up choosing Piha Beach and began the 45 minute drive there. The fun and twisty Piha Road passed through the Auckland Centennial Park. It reminded me of Hana Highway in Maui.

Given that I am an unabashed gearhead, I opted for a lovely V8 sedan for my rental. I definitely had fun on this drive. Nothing else mattered, I was just living in the moment.

I had one more objective to complete before calling it a day. I wanted to see the Auckland skyline and there was one perfect place to do that: Mount Eden Domain. It's Auckland's highest volcano with a massive crater.

I setup shop for about an hour to do this timelapse. I wanted to do a much longer timelapse but I parked in an area that was going to close at 8:30pm, I left my jacket in the car and it was getting cold and I really had to pee. Next time I'll be sure none of that happens..

I returned to the hotel by 9pm. I was going to head out to dinner but was so exhausted that I had a snack and just called it a night.

MORE FROM THE COLLECTION