Slightly larger than a PDA and weighing less than a pound, OQO's Model 01+ is the smallest Windows XP computer. OQO has been working on this device for several years now, but Tom's Hardware was finally able to get their hands on one. The OQO sports a 1GHz Transmeta Crusoe processor, a 1.8" Toshiba 30GB 4200rpm hard drive, a 5" 800x480 resolution screen, USB and Firewire ports, a micro-sized keyboard with a joystick for a pointing device and 512MB of DDR266 which is soldered onto the mainboard so that eliminates upgrades. The keyboard might scare many people away, especially those with larger fingers, but the OQO can be purchased with Windows XP Tablet PC Edition and users may control the OQO with a stylus. 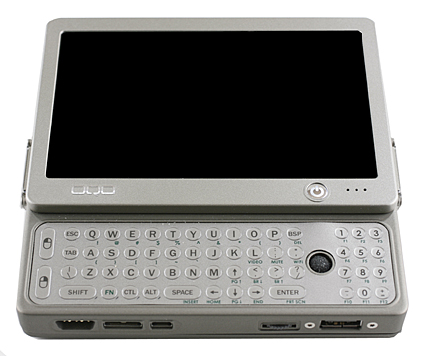 However, with those specifications you can't expect the OQO to be a fast computer and the benchmarks prove it. Tom's Hardware compared the OQO against similarly spec'd ultra-portable notebooks. The notebooks scored much better in every test.

The thing that interests me is not how well this device performs but how the OQO Model 01+ fairs when compared to Microsoft's new Origami or other manufacturers' UMPC (Ultra-Mobile Personal Computer) devices. At last week's Intel Developer Forum, Microsoft revealed its plans to revolutionize the PDA as we know it. They called it Origami and it is a portable device smaller than an ultra-portable notebook but larger than the OQO. If you haven't seen Microsoft's video for Origami,it well help answer a lot of questions.

ArsTechnica described how the Origami will run on a modified version of Windows XP Tablet PC Edition loaded with Windows Touch Pack, making it friendly for stylus-free, finger usage. The specification for Origami also calls for a 800x480 resolution screen but packs a punch with a 7" display, an Intel Celeron/Pentium M or Via C7 processor (really, anything will be better than the Crusoe in the OQO), upgradable memory and a 30GB or larger hard drive. However, the Origami has one huge advantage, its price tag. You see the OQO cost over 2000 as reviewed by Tom's Hardware and I can't imagine that a stripped version would be all that much cheaper. The Origami makes it's debut with a price range of 600-1000.

I don't think the OQO will have much of a market now that the Origami is gaining some hype. I could have seen the OQO selling like hotcakes 2 or 3 years ago when we first heard about it, but not anymore. The OQO is plagued by old technology - slow RAM and an ancient processor. Microsoft hit a high point with Origami, now I'm just waiting to see if Apple will ever act on that tablet rumor. Microsoft isn't the only one with a UMPC, they are just the first to make it popular. Expect to see some great UMPC devices emerge from companies like Samsung and Intel.