Update: I have written a follow-up post after having used Nike+. I was also in a Nike advertisement for Nike+.

Not quite, but it's close. Apple and Nike have joined forces to create an innovative offering. Nike+ is the unique combination of a sporty Nike shoe that has a spot for a wireless pedometer that can be tracked by your iPod Nano. Your Nano, once equipped with a receiver plugged into the base, keeps track of your running pace as well as a slew of workout stats. It also has the ability of telling you your pace through your earphones so you don't have to look down at the screen. The iPod add-on transforms your center button to a "power song" button. That's right. When you want to speed up your workout, press the power song button and it will begin playing a song you have previously selected.

It doesn't just stop there. Once you dock and sync up your Nano, Nike+ software loads your workout stats to their website (watch the video) where you will be able to track your workout progress. Nike has this whole campaign well-planned. They offer celebrity athlete testimonials and a portion of the site dedicated to letting you know what each person has as their power song. In the future you will be able to purchase their power songs through iTunes, in addition to other Nike-made workout mixes. 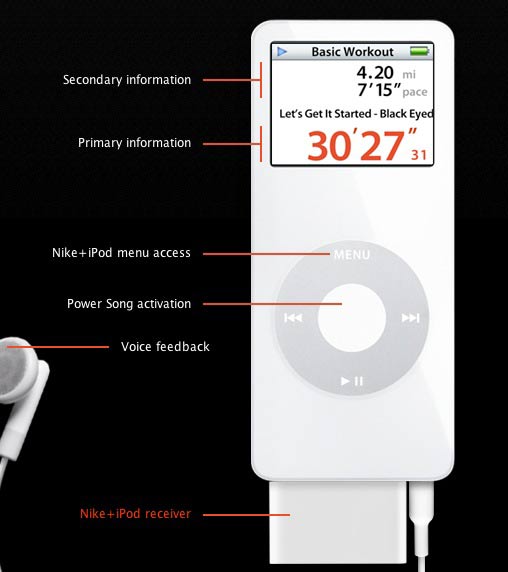 Community is another aspect of the Nike+ campaign. You can share your progress with up to 50 others and compete with them if you wish. Say I have a bet with my friend Marc Bhargava, currently in Boston attending Harvard, to see who can run 10 miles the fastest. If we both have Nike+, we can easily compete and see who wins - even when we are halfway across the US. However, there seems to be one drawback. There is currently only one Nike+ shoe and it's red and black. If you don't happen to care for red and black shoes, then it seems as though you will be passing this up. Although, the iPod component of the Nike+ experience is sold separately for 29, so you could stick the wireless pedometer in your sock if you really wanted to use it.

Prepare to empty your wallet when the Nike+ experience officially launches on July 13th, 2006. The shoe retails for 100 in addition to the 29 iPod add-on. You can pre-order now. Check out Apple's page for the Nike+ here.