Today's keynote speech by Steve Jobs at MacWorld in San Francisco brought us several things - the hyped-up iPhone and Apple TV. On the side, Apple silently released an upgraded Airport Extreme base station with 802.11n capability. If you have a 24-inch iMac and buy the Airport Extreme, you can enable 802.11n in your iMac with the bundled software. Other currently shipping Macs have 802.11n built-in. Unfortunately, there was no mention of any new iPod or Mac.

It's quite unusual that this keynote unveiled two completely new non-computer products. With Apple recognizing the surge in use of other gadgets, it's understandable why Apple changed its name from Apple Computer Incorporated to simply Apple, Incorporated. Moving on, the iPhone itself is quite an amazing engineering feat.

You've probably memorized the specs by now but they are quite outstanding: 3.5-inch touch-screen, 11.6mm thin (that's almost as thin as Type III PCMCIA), 2MP camera, proximity sensor, accelerometer, and ambient light sensors, Quad-band GSM/EDGE + WiFi (yes!!) + Bluetooth 2.0 and an awe-inspiring battery life of 16 hours for audio and 5 hours for actual phone use.

The software that runs on the iPhone is a version of OS X that can amazingly run "full desktop-class applications", somehow. There's a version of Safari that is the first fully usable HTML mobile browser. Other iPhone software highlights include: 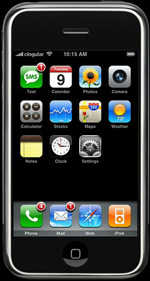 I am blown away by how capable the software is, Safari especially. Unfortunately, the iPhone is a little pricey at 599 for the 8GB model and 499 for the 4GB model. However, if you put that into context that's in the same price-range as a high-end Treo or Blackberry. The phone won't be shipping until June so you can start saving up now. Luckily for me I'm on Cingular so upgrading to the iPhone shouldn't be too hard to do.

I'm just wondering what the data plan will run for. The data plan on my old Motorola Q was horrendous and I ended up with 90/month bills when I wasn't even getting "unlimited" data. As long as the iPhone isn't crippled by Cingular, it will no doubt be an amazing seller.

Another thing that has me up in arms is that the iPhone is all screen. In a few months, it's going to get just as scratched as my iPod. I'll have to get my hands on the touch-screen to see what it feels like. I'm not a big fan of touch-screen devices as I prefer tactile feedback.

So, will I buy the iPhone? Ignoring the high price, my decision would be based on whether the EDGE connection can be utilized on my Mac and if the iPhone can utilize closed WEP or WPA WiFi networks that require authentication in a browser, like the one on campus at Georgia Tech.

In a nutshell, the Apple TV is Mac Mini modified for your home theater setup. A bit less powerful than a Mac Mini but just as capable, it boasts a 40GB hard drive with 802.11n connectivity which will work nicely with your new Airport Extreme. At 299, the set-top box is essentially the missing link between your computers (works with PCs too) and your widescreen TV. The Apple TV supports up to 720p and is appropriate considering the quality of videos and movies offered for download on iTunes. I love the bevy of connections on the back of it - ensuring capability from high-end plasma to college-kid CRT (assuming that CRT has component video connections).

However, unlike Macs which can be manipulated to play other forms of content like DivX, I don't think you'll be able to do that with Apple TV just yet. As far as putting in a larger, aftermarket hard drive, it will probably use a 2.5-inch laptop hard drive filled with the special software to run everything. It might be a little more involved than a simple drive swap and require cloning the drive and putting the image on the new drive. We'll be seeing a bunch of people attempt this in the next month or two I'm sure.

As for me, I won't be buying the Apple TV. There's a 20-inch Sony flat CRT in our living room at school.. and I'm writing this from my 24-inch iMac. On the other hand, Charles Stroup, owner of 123MacMini and 123MacBook, ordered 3 today.

Many people, including myself, were a bit disappointed with today's announcements. Don't get me wrong I am bouncing off the wall thinking about the iPhone, but it's just not a keynote without some actual computer announcement - Core 2 Duo Mac Minis, 8-core Mac Pros or revamp of their displays, or maybe a 12-inch solid-state MacBook? Yeah, that would have been nice. What are your thoughts?
Published 09 Jan 2007