Note: This post is now a bit outdated. I have updated my Stuff I Use page.

I have always been a fan of The Setup and have been maintaining my own Stuff I Use page for some years now so it only made sense that I would eventually write my own such article. This is how I work and what I use to do it. If you have any questions please leave a comment below or reach out to me on Twitter.

Who are you, and what do you do?

Hi, I'm Paul Stamatiou and I am designer and front-end developer in San Francisco. I enjoy photography, writing and running. I love clean and simple things, from products to workspaces. I am an experience designer focusing on growth at Twitter.

What hardware do you use?

My main machine is a mid-2012 15" MacBook Pro with 16GB of RAM, a 2.7GHz i7 and the matte 1680x1050 display. I was close to buying a Retina MacBook Pro but after a few friends had countless issues with their displays I decided to wait for the next version. I have a quad-core hackintosh in a lovely Lian Li PC-V700 case with an SSD for the OS and a few terabytes of storage for my DSLR RAWs. It doesn't get much use anymore except for storage. I'm a big fan of the now-discontinued Apple Wired Compact keyboard and the corded Logitech G500 mouse. My secondary machine is a 16GB iPad Mini.

At work I have a 27-inch Thunderbolt Display and at home I have the previous generation 27-inch Cinema display. They're beautiful displays but the glare can get intense during the afternoon sun. If I had to do it again, I'd opt for the matte Dell 27-inch. It's not LED-backlit but the Dell's CCFL is better at color reproduction than Apple WLED backlight; you can't find many RGB LED backlit displays these days.

On the way to work I use Apple EarPods with my iPhone 5 and at work I use Beyerdynamic DT 770 Pro circumaural headphones mated to a FiiO E10 USB DAC. While running I use Klipsch S4i earbuds with soft Comply Foam tips (anything else falls out while running). I use Audioengine A5 powered speakers at home when I don't feel like plugging in my Sennheiser HD 650's.

Throughout the workday I can be found scribbling meeting notes or small interface ideas in my Evernote-edition Moleskine with a Pigma Micron pen. When it comes to larger interface sketches, I take a stack of legal paper from the printer and some of the neutral gray Copic markers lying around the @design studio.

I shoot with a Canon 5D Mark III. It's the best camera I have ever owned: fast, tough and feature-packed. Sure it's big, heavy, very expensive and lacks GPS logging, but it can practically see in the dark. I only own a few, fast prime lenses: 24mm f/1.4L, 40mm f/2.8 pancake, 50mm f/1.4. I shoot landscapes, architecture and low-light scenes with the 24mm. Several of my friends are DJs, so I'm also often shooting in dark clubs where the f/1.4 shines. I have a Speedlite 580EX II flash as well but prefer shooting without it when possible.

During weekend writing, photo editing, designing or coding sessions, I am parked in my orange Herman Miller Embody chair. I loathe the Aeron but the Embody fits my body perfectly. My only nitpick is that it's a heavy chair and even with the larger wheels made for carpet it requires a lot of force to move.

I use Sublime Text 2 for any kind of development with the Soda Dark theme and Blackboard color scheme. iTerm2 serves as my Terminal replacement, with a must-have system-wide show/hide hotkey so I can summon it wherever I am. I use iStat Menus to keep an eye on CPU and network usage.

Sublime Text 2 is also where I do most of my article writing but I have recently been experimenting with iA Writer. After years of trying to become an Evernote user, I finally got hooked with their latest version. Most of my articles now begin as notes or outlines in Evernote. It also stores everything from random notes all the way to a list of places I want to visit. I often find myself using Evernote on my iPhone to write in ideas throughout the day. I also use the OS X/iOS Reminders app for quick reminders and to-dos that I'll access soon.

I spend most of my time in Photoshop CS6 and make heavy use of Layer Comps when designing UI flows or interactions. The "Layer Comps to Files" default script makes my life easier, as does Photoshop Secrets. I meticulously measure everything with xScope, a tool I've been using for almost 4 years. I not-so-secretly wish there was a way to link Layer Styles. I use a few Photoshop extensions from time to time: dmonzon Trevor Morris Scripts, CSS Hat and DevRocket. I also use a silly corner resizer jsx script so I don't have to switch tools, select corners and all that jazz just to resize a roundrect. Yeah, you can't be a designer unless you call them roundrects as a QuickDraw throwback.

Whenever a particular website or UI element catches my eye, I catalog it in LittleSnapper. It has a bookmarklet that captures the screenshot in the background. I also use GrabBox to easily upload and share screenshots.

Google Chrome is my browser of choice for everything. I use the following extensions: Currently, WhatFont, Google Dictionary, Image Properties Context Menu, JSONView, Google RSS Subscription Extension and Kippt.

Google Chrome Sync is the best part of my phone, tablet, and desktop setup. I have a bookmarks folder simply named tmp that serves as my own kind of Instapaper. I read everything in there every Sunday and clear it out. Whenever I have a spare minute I can open any of those saved articles from any device thanks to Google Chrome Sync.

I post-process my photos in Adobe Lightroom 4 but have been increasingly curious about DxO Optics Pro 8 as it's better with lens correction. If I'm in a rush I'll use some presets from onOne. I use Snapseed on my iPhone to tweak photos before I post them to Instagram or Twitter. It has a great gesture-based interface and several modes that make it very powerful.

I love using Runkeeper on my iPhone. It's such a simple concept — a datalogger at heart — but it keeps me coming back to log runs and share the results with friends. I am using it to track my 2013 goal of running 1,000 miles. 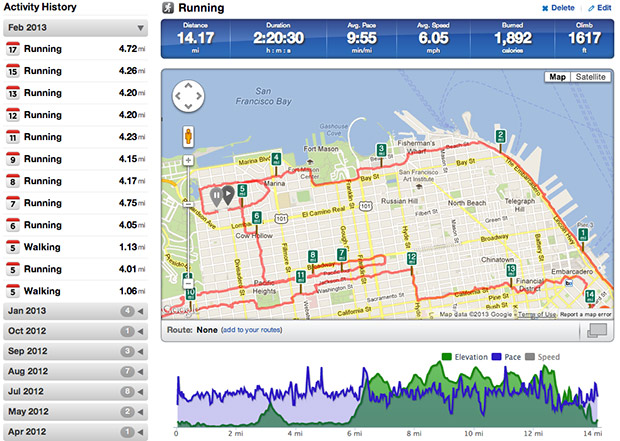 Other apps that live on my home screen include Instacast for streaming podcasts and Prismatic for news. I've tried apps like Circa, Feedly and Summly but always find myself opening up Prismatic. It just knows what I like to read.

My iPad Mini is the first thing I grab in the morning to check Twitter and email. I find myself catching up on email and news over breakfast or in the evening after work. It's also where I read Kindle books quite often. Honestly, I'm rather shocked by the iPad Mini. I had an iPad 2 that I did not use at all and ended up giving to my parents. The Mini is the perfect size.

A good chunk of my work and workout music listening involves one of these: Above & Beyond: Group Therapy, Air Up There with Tritonal, Eric Prydz Epic Radio, Tiësto's club life, Armin's A State of Trance, HypeM.com Popular. Between that and occasional Spotify/Rdio usage, I don't really manage an iTunes library anymore and I like that.

Every once in a while I play a few rounds of Counter-Strike: Global Offensive on Steam. It's a game you can play for just 10 minutes at a time and be done with it. Not something you get sucked in for hours, like anything made by Blizzard.

What would be your dream setup?

I think we're past the desktop tower age but it's a shame we're stuck with measly dual-core Macbook Airs. My dream setup would have tower-like horsepower (think 16-core, 128GB RAM and something as powerful as RAIDed Fusion ioFX PCIe cards.. we did say dream didn't we?) in a 14-inch Macbook Air-like body. Yes, 14-inches. I think that would be a nice size.

It would have built-in cellular data from whatever gets invented after LTE. The display would be HiDPI but resolution would be something sane like 3360x2100 instead of the current 13" retina Macbook Pro's sub-par 2560x1600. And while we're dreaming, a 30-inch HiDPI display as well.

Until then, I'm pretty happy with my current setup. The only thing that would be nice is a Drobo Mini filled with SSDs and connected via thunderbolt for storing my active Lightroom catalog.

For my camera setup, I'd like my DSLR to be able to instantly focus in the dark with no AF light from a disabled Speedlite. That's my only nitpick. And maybe if it could be lighter. Not smaller — I love how it fits in your hand and doesn't feel like you're going to drop it cough Sony RX1 cough — just lighter.

Update: I've since started using Frank DeLoupe, a hotkey-initiated color picker that syncs your selected color with Photoshop (even when you are outside of Photoshop). Super handy!

Disclosure: Some links use an affiliate code (still paying tuition!).