I got an email from Nike's ad agency back in November. After many more emails, quite a few calls, a demo video, film scouting and then a day of shooting, I became the star of my own Nike+ conversional ad. There are currently 5 conversionals up and they briefly take you into the life of a real Nike+ user that converted to using Nike+. As a web guy always on the computer I was lured into using Nike+ almost purely by a curiosity for the technology behind it.

If you're not familiar with the whole Nike+ system, I've written about it a few times before. Without further ado, here's the ad: 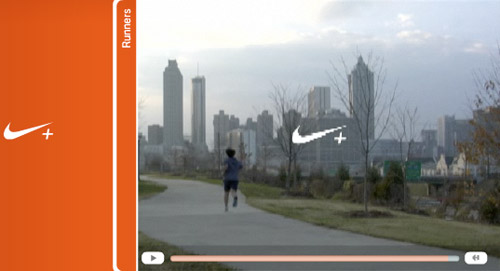 Update: The video is now on my about page. I'm not sure how much longer Nike will keep the video up on their site.

And no, I don't think I talk that fast.. well maybe I do when I'm hopped up on Starbucks. Also, everything was completely unscripted. That's all me talking.

Before filming took place, I went out with a few people to do scouting and find good locations to film for the next day. This took several hours but I got free coffee so I was exuberant. Mario, the director of photography, took various pictures with his Nikon D200 to show the director potential shots to film.

Filming the next day was quite an experience. I think I counted ~16 people at my house at 7am on the Saturday before my final exams. Some had flown to Atlanta from Colorado, many from Los Angeles and some were local. The first few hours were spent setting up and filming an interview in my room. Unfortunately, only a few sound bytes here and there made the cut but I remember talking about AJAX, MySQL and Ruby on Rails so it's probably better that it was edited the way it was.

A ton of footage didn't make the cut. After having talked with many of the video guys and producers, they said it was typically a 100:1 ratio of what's shot to what makes the final cut. Raw footage is generally around 60-70GB for these conversionals and everything was shot in high definition with some Panasonic cameras that capture to 2 P2 cards. A P2 card is a very expensive flash memory module utilizing a PCMCIA connection and is essentially 4 RAID'd SD memory cards - quite fast. 8GB on a P2 card equated to roughly 20 minutes of footage so there was naturally a lot of dumping video to a portable firewire drive. Post-production was all done in Final Cut Pro. Oh and I thought it was pretty cool that they were able to sync two cameras together via a firewire cable so that they had the same timing and audio.

All the logos in my room were hidden or covered. For example, check out that strategically-placed post-it note over my monitor's logo. Some posters in my room had to be rearranged and I think the graphic on my t-shirt was pixelated in the video. For those interested, I was wearing the magic eraser (CMD+Z) shirt from Insanely Great Tees.

There were scenes where I was running behind an SUV with the camera pointed out of the back. Other times I was running across a bridge with a camera stuck out the window of an SUV driving alongside me. Overall, I think there were 6 or so locations that we shot at. I was quite worn out by the end of the day. For most of the takes I was listening to The Killers - Shadowplay and the other times the iPod's battery was dead.

The most annoying thing about it all was using the standard Apple iPod headphones. As I've mentioned before, the damned earbuds fall out all the time. 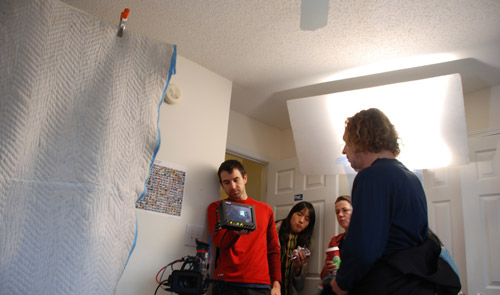 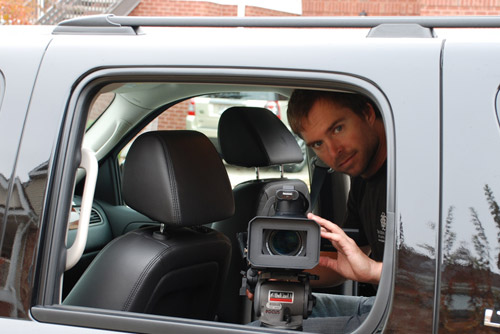 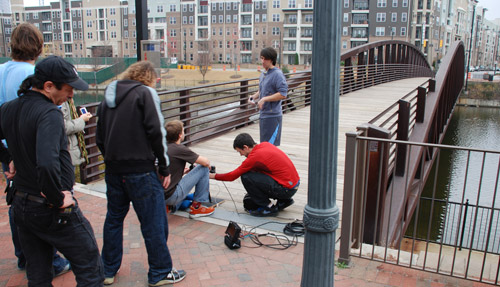 It was quite an experience and I learned a lot from talking to everyone involved. It was definitely a peek into a different kind of lifestyle. One week these freelancers are filming a music video, another they're shooting something with exotic cars and so on. Quite a bit of traveling is involved though. One of the camera guys was telling me how he always gets stopped in airport security with all of his hard drives, memory cards and various gadgets.

Disclosure: I was compensated by Nike for the conversional and signed lots of legal documents that probably made me their property. Fortunately, I truly enjoy using Nike+ and I don't think that will ever change... unless they release Nike++, in which case I will die of laughter.