Today Mozilla, the company behind your favorite open source web browser and email client, has launched a subsidiary of the Mozilla Foundation, focused entirely on email and Internet communications. Mozilla Messaging is the name and ignoring prevalent web trends is the game. That is, the prevalent trends relating to the proliferation and utility of highly accessible web applications instead of local software. 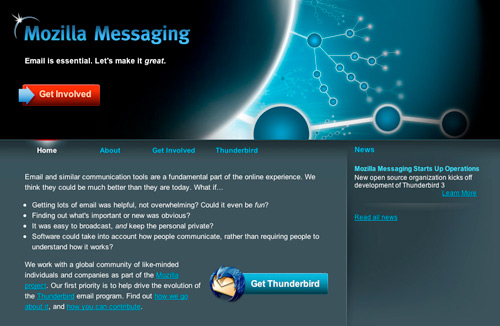 Mozilla Messaging CEO David Ascher explained the new company's plans by talking about the next version of Thunderbird.

Specifically, Thunderbird 3 will build on the great base that is Thunderbird 2 (and the work already performed in trunk by the current and past contributors), and add some key features, such as:

Okay, that's nice but it looks like just a few new features. It doesn't seem like the type of paradigm shift Mozilla is aiming for with the creation of Mozilla Messaging and the aura floating around it. David seems to be missing the whole movement towards web applications. Unless Mozilla starts recognizing this, they will remain behind hugely successful web applications geared towards email communications, such as Google Apps and Zimbra Collaboration Suite.

There are interesting possibilities to consider there as web application technologies become faster, richer, and better integrated with the desktop experience, which will inform our long-term planning.

David made a slight nod in the direction of web apps but puts it on the back-burner for when web app technology is "ready to catch-up with desktop software", essentially. This shouldn't be the case. Mozilla Messaging needs to be doing whatever they can to cater to the web app users of today, if they can. If you ask me, desktop email clients might even be a lost cause. I'm curious as to what exactly their "long-term planning" includes.. perhaps a way of syncing the Thunderbird database and settings online for multiple clients to work seamlessly?

Naturally, the business types that live in Microsoft Outlook will think I have lost it but I have been leading a web app life for quite some time. I have been on Gmail since 2004, then I got on Gmail for hosted domains in 2006 and then I migrated to Google Apps for domains in 2007. As for school email, Georgia Tech is currently in the middle of a migration to Zimbra and my account is set for migration tomorrow. (If you go to Georgia Tech and have yet to schedule a migration, do so here: mail.gatech.edu/signup).

I'll leave you with another piece of David Ascher's launch post:

It is worthwhile considering what the right user experience could be for someone using multiple email addresses, multiple instant messaging systems, IRC, reading and writing on blogs, using VoIP, SMS, and the like. What parts of those interactions make sense to integrate, and where?

He's right to ask about which interactions make sense to integrate down the line. I'm not sure I would want something that does all of those things. It reminds me of a page in Don Norman's The Design of Everyday Things where he asked his students to design a device combining a radio, cassette player, CD player, telephone, answering machine, clock, alarm and desk lamp. 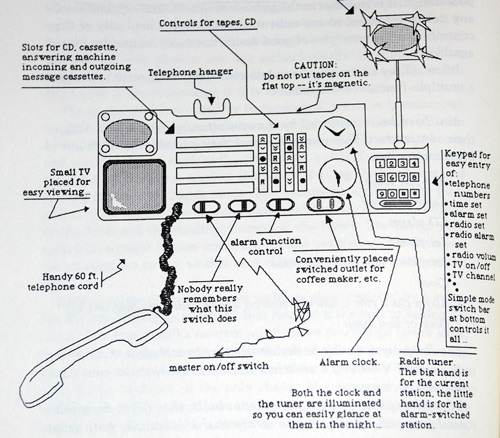 For a different take on the Mozilla Messaging news, read my friend Jason Mick's article on DailyTech.