As I talked about earlier, today was the Apple special, invite-only event. They announced the Intel Mac Mini with two options for the processor, single or dual core. The Core Duo runs at 1.67GHz while the single core, Core Solo, model runs at 1.5GHz and comes with 512MB. Both models sport DDR2 PC-5300 RAM and can hold up to 2GB's, up from the older mini's 1GB. It seems as though there are only 2 models, starting at 599 and 799, all shipping with iLife '06 and an upgraded Front Row. They also announced an iPod Hi-Fi, which is some sort of boom box with twin speakers and a subwoofer that retails for 349. Read the rest.

Update: Actually, that's it. The shortest keynote ever. Lame. Redefined. No new iBooks, or Cinema Displays with integrated iSights, no media cube, no Airport Express N with HDMI output. 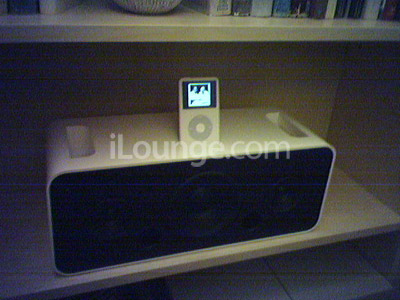 The new iPod Hi-Fi, straight from the event via my iLounge insiders.
Published 28 Feb 2006