Since the beginning of 2007, PaulStamatiou.com has been hosted by Media Temple on their then newly launched (dv) dedicated-virtual 3.0 platform. Before that I was on the (dv) 2.0, so I'm quite familiar with their offerings. While the service and hardware itself had been great, I was a little put off by the fact that most of the software was outdated - old versions of PHP, MySQL and even the OS. Media Temple has listened more closely to people like me and developers hosting applications on the (dv) with their roll out of the (dv) 3.5 today. 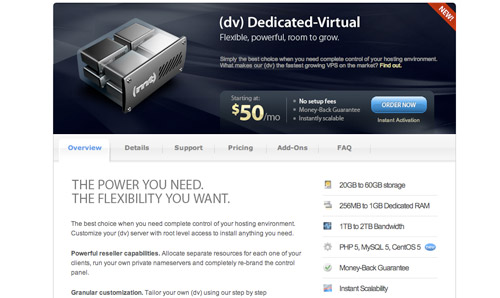 Why not just call it 4.0? Well the (dv) 3.5 is running PHP 5, MySQL 5 and CentOS 5 - see a pattern there? In addition, (dv) 3.5 boxes come standard with Plesk 8.3, Perl, Python, Ruby and pretty much whatever else you might need to build your app and host your site. As a refresher, the (dv) is Media Temple's mid-range to high-end server offering. One step lower gets you the (gs) for 20/month and one step higher gets you their uber server, the Nitro, for 750/month. The (dv) fits between the two with plans starting at 50-150/month.

More importantly (to me at least) MediaTemple made a slew of optimizations with the (dv) 3.5. Specifically, the new (dv) uses around 30% less memory than the previous configuration in the (dv) 3.0. That should come in very handy for me. In the past month, I have been dealing with spammers hitting my server very hard - hard enough to spike load up to 9 for quite some time and use crazy amounts of RAM, eventually crashing the server. I think this will become more of a non-issue after I migrate to the (dv) 3.5 and have more system resources available.

For those that have been curious as to what server I am on, it's a (dv) Rage with upgraded RAM. In the last 30 days, I pulled in close to 400,000 pageviews and I haven't even come close to maxing out the (dv). Out of the 1.5TB of available bandwidth on the (dv) Rage, I only consume about 100 gigs a month. My normal load average is around 0.4 on the dual-core Xeon. The new (dv) 3.5 comes with a quad-core Xeon 2.33GHz processor in an HP Proliant DL-Series server with SAS hard drives in a RAID-5 array (the 3.0 had SCSI disks). To clarify, these are definitely not low-end servers built with SATA drives from Best Buy - things you might see at a "regular" VPS host. (burn!)

I'll be migrating over to 3.5 either this evening or a bit later in the week depending on what school work lies ahead for me. Let me know if you have any questions about the new box. Speaking of which, if you have your own site, who's your host?

Disclosure: I was not paid for this post and do not receive any sort of referral credits. I have been a friend of (mt) for a very long time and they cover my hosting needs as well as call me from time to time to talk about the latest gossip on the block.